This is the title of an old 2017 Salon topic that I cannot figure out how to bring here. The gist is:

The rubber ‘doughnut’ that couples the upper splined shaft exiting the steering column to the lower shaft going to the steering box via upper and lower flanges or ‘yokes’ on a MK 1 (and MK 2) needs a center-to-center spacing of 15/16" for its bolt holes to match the spacing of the threaded holes in the flanges. The old rubber (cracked) doughnut has bolt holes spaced at 15/16" that match the flanges. The rubber ‘doughnut’ that SNG Barrett sold me for this purpose has bolt hole spacings of 2 1/8" which is far beyond any way of fitting. The factory parts manual states that the doughnut part number is C10836/1.

There was no conclusion to the 2017 thread – only the problem was stated.

I called SNG Barrett yesterday. They said that they would look into this problem, and I should call today. I am posting this now because I doubt that they will come up with a solution. If they do, I will post their solution. But I am wondering if others encountered this problem and what solution they found.

I di this recently and bought the SNGB part. It fitted fine.

Some (here) say that it (rubber) should be cramped prior to mounting, so it stays put with a tendency to expand after set-up. Also some say - it comes with a sheet-metal ring, clamping it for easier installation.
I would say then - why not leave this ring in place (if present at delivery) ?

I replaced the coupler on my MKII a few years ago. While I didn’t measure the actual spacing, the holes on the new one were too far apart (maybe half the diameter of the bolts. I just used a large hose clamp to compress it while fitting the bolts and removed it once they were tightene

I believe the ‘doughnuts’ are means to be ‘too big’. All the ones I have ever seen used anywhere on cars have been. I don’t know why.
They need to be compressed for fitting, either as they come with the metal strap that usually surround them or with some other method. Once fitted they should be released - I’ve never seen a doughnut that still has it’s metal strap on once fitted.
Again I don’t know why but I believe you remove the compression before final tightening of the bolts to allow the doughnut to expand.

Exactly. Had the same problem with my Mark IX and Mark II couplers. Searched far and wide for the right hole spacing, not to be found. While half of the shaft was on the bench. the vise did the job of squeezing the donut to install the bolts. In the car, I used a “C” clamp to squeeze the other side to but the bolts in. Might be a headache in small quarters.

Thanks to all for your constructive comments. We ended up first compressing the ‘doughnut’ with a hose clamp so all the holes aligned with the flanges and it was easy to screw in the bolts. The doughnut was then partially attached to the two shafts in the car and the hose clamp removed. Finishing the tightening was difficult because the shafts meet an an angle of around 20degrees which distorts the rubber doughnut a lot, much more than the initial compression with the hose clamp, so this initial compression could not have hurt the doughnut. I attach a photo of the hose clamp compressing the doughnut. Anyone know what kind of clamp this is? 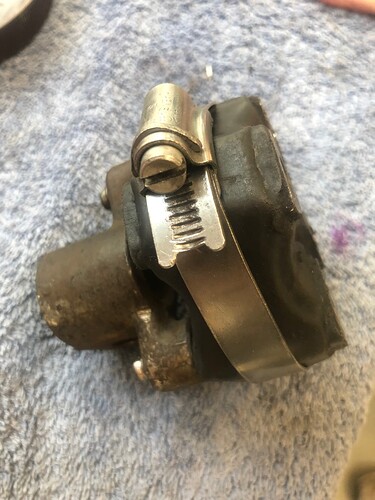 Check the markings but it looks like it might be a Cheney clamp that were original equipment on Jaguars and now highly sought after for the concours fanatics.

It is indeed a real Cheney. Probably worth more than the rubber doughnut that it was compressing. I used it because I had no other clamp that large.