I never knew it had a name Bowden. I’ve seen it on so many lawn mowers that it just sprang to mind. Looking it up on McMaster-Carr they call it push/pull cable, available in various inch sizes here in case you have trouble finding it in metric countries.

When I was a kid my dad had a Chevy truck with a push/pull hand throttle, and we used it for cruising on the interstate highway. Really, on the flatlands of the middle US dad would go 2 or 3 hours without having to change the throttle position. You of course had to push it off when you wanted to stop.

on the flatlands of the middle US dad would go 2 or 3 hours without having to change the throttle position. You of course had to push it off when you wanted to stop.

I love stories like that, Rob. They speak of a time that was less frenetic. I have nice memories of driving long distances with my father in our old EJ Holden. The only problem was that he smoked!

Nevertheless, it formed wonderful memories which are all the more precious now he’s no longer around. My boys are quite happy to come for a drive with me in the MKV, if I can get them away from their computers. 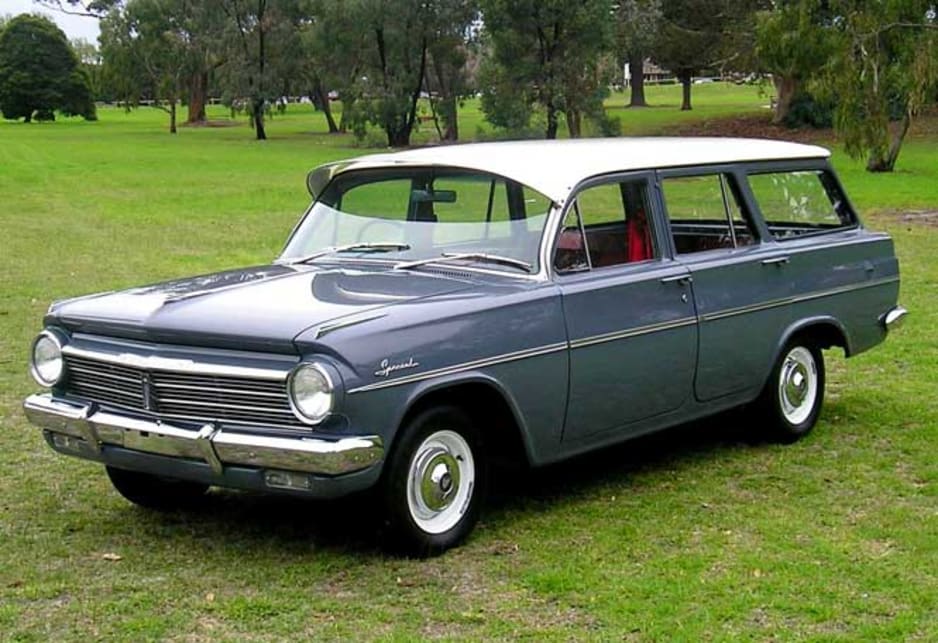 Peter Scott, being the knowledgeable fellow he is, used the name Bowden cable. I have found a Bowden cable manufacturer in Melbourne!

To be honest Tim, I just used the name Bowden in the same careless way that people describe a vacuum cleaner as a Hoover. I don’t know if Bowden made the cable in question.

I don’t know if Bowden made the cable in question

Well it led me straight to Bowden cable and the manufacturer / restorer in Melbourne and for that I am very grateful. Perhaps it is generic like “Hoovering the floors”? I wonder if people will “Dyson the floors” in years to come?

The MKIV is coming together slowly with help from many wonderful people in the Jag community. It received the trial fitting of the bonnet mascot today, so perhaps it has been “Jagged”? 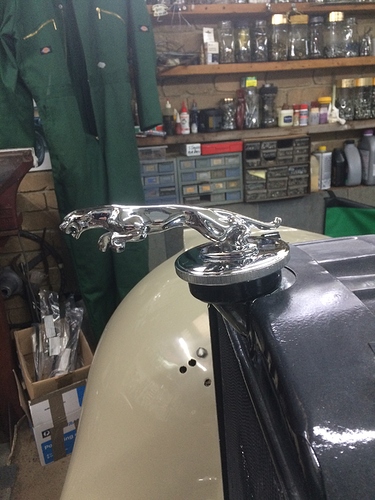 OK Tim, I was intending to use this fast idle control on my 120
( in case of “why”, to shut off the S/C soon after start) but I have a alternative.
Now you know what to look for you might souce one somewhere nearby, but if not
mine is FOC. I will check that postage from France is not exorbitant.
Peter B.
I also have a escutcheon but marked “interior”

My MK IV was also missing many parts which had to be improvised. I made an anchoring tab attached to the lower right of the air intake plenum. I agree with Tim on the questionable purpose of a hand throttle. Never used mine. The photo is of a LHD linkage, including the Throttle knob. 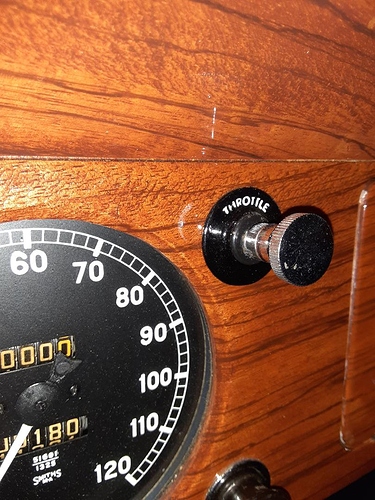 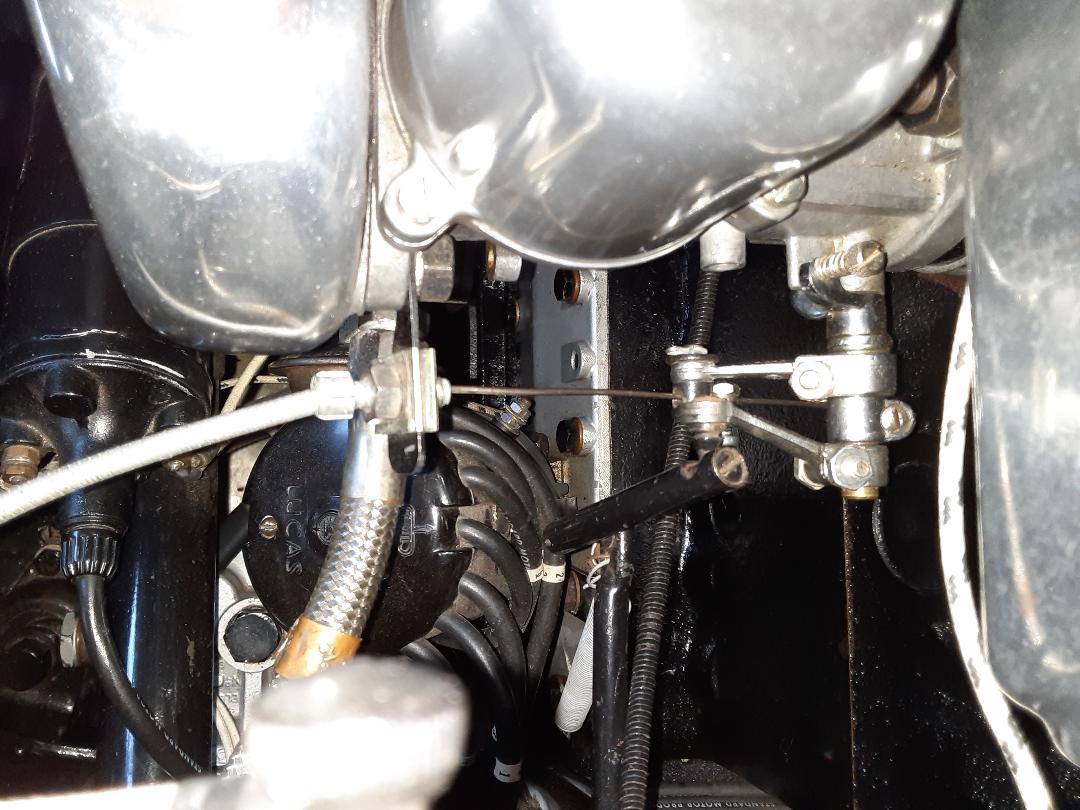 questionable purpose of a hand throttle. Never used mine

I have heard a few theories so far about its use. One was as an early form of “cruise control” which would be rather terrifying in an emergency braking situation. The other, and the more likely, was so that the idling speed could be increased in very cold weather so that the car didn’t stall after the starting carburettor cut out and before the engine had reached operating temperature. Oddly, it wasn’t continued in the MKV’s and subsequent cars? I guess you just used your foot on the accelerator to achieve the same result and simply waited until the motor reached the required operating temperature?

Thank you for the photo of the anchoring tab on the plenum. I wonder if someone might take a photo of the original MKIV tab / bracket and post it in this thread, please?

I have in the past tried using it as a cruise control on motorways and it does give you a change of position for your right foot but with gradient changes you are still needing to fiddle with it so not a very good cruise control.

I do use it at cold starting because I dislike operating on the choke. So I start the car with the choke then advance the hand throttle and switch off the choke.

There were early cars and tractors with only hand throttles. Cars like Ford Model A had both a foot-pressed accelerator knob and a hand-turned throttle lever on the steering column.

Hand throttles are useful for at least:
1.) Varying idle according to weather and engine conditions (may also be separate from choke control)
2.) Allowing engine to run at faster than idle so pointed down a farm row would allow vehicle motion without driver in seat with foot on accelerator (e.g., hay distribution off back of vehicle)
3.) Moderate rev of engine for starting from stopped on steep hill for cars with foot brakes
4.) Cruise control on long drives
5.) Operation of power take off (PTO) devices when fitted to a vehicle

Thank you very much for adding to the puzzle for me. Quite a few things which would have been hang-overs from agrarian times! From what I’ve heard, most people with MKIV’s seem to have attempted the “cruise control” option with much fear and trepidation. It reminds me of an answer to a question I once asked a neighbour, who was a pilot with Qantas. I asked him what it was like? He said, “Hours and hours of boredom and minutes of terror!”

That might sum up the Hand Throttle “Cruise Control” experience, I’m guessing?

Tim , as Peter Scott posts the “ cruise control” possibility, situation suitable of course, is handy to give the right foot a rest. In emergency you do have the left foot available , hopefully !
Peter B
P M noted.

It’s in the electrical section.

Mark V does not have this BTW.

Here’s what my dad’s Chevy truck had, I remember the knob marked T. 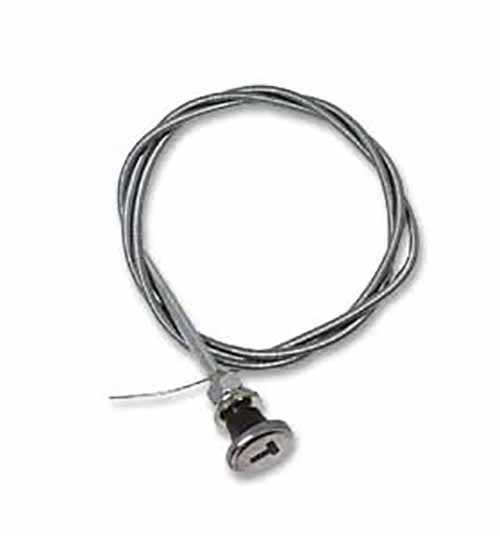 The hand throttle is only a driver’s aid to assist the cold engine in very cold conditions by raising the idle speed slightly. I have used mine a little after coming off choke. If you have your idle down to the usual recommended of 450/500rpm, you may find that it stalls as soon as it comes off choke. (I run my idle at 650ish as it is a smoother rise in revs for starting from rest.) Actually, if you get the tune right to idle at the 400 or so, they sound great and it impresses admirers at displays.

Even though the water jacket is up to temperature, the rest of the engine is far from it. The suction through the carbs makes the fuel atomisation situation worse as the negative pressure drops the incoming air temperature further, and carburettors can ice up. These old engines were quite cranky when woken up in the cold, and idling often resulted in stalling until the operating temperature was reached. If us oldies can remember the good-old-days of fifty or sixty or so years ago, our neighbours often ran their cars for a few minutes in the garage or driveway until off the choke because of lumpy running. ‘Blipping’ the throttle was also another skill used to keep them from stalling at idle at the lights, and not to advise you were a petrol-head
.
The hand throttle is also a simple aid if you need to run the engine at higher idle when you are fiddling around with tune.

The inner cable needs to be a high tensile strand (= piano wire), not a braided cable, as it has to positively push the bell crank on the carburettor back to neutral. The inside of the throttle control is interesting and a bit special too, and I can post a photo of a dismantled one if anyone is wanting this detail.

The inside of the throttle control is interesting and a bit special too, and I can post a photo of a dismantled one if anyone is wanting this detail.

I, for one, would love to see the inside of a dismantled one please, Peter.

it has to positively push the bell crank on the carburettor back to neutral.

That’s interesting, because the one on my '38 SS is not that way, the hand cable merely pulls the linkage to open the throttle, the spring on the linkage pulls it back.

I agree with Rob regarding the SS Jaguar arrangement. For the MkIV it only requires a return spring for that arrangement to operate with non-rigid cable.

There is a braided cable used on the Mark V emergency brake. Father time commonly makes the long line higher friction in the greased line more than the spring design overcomes and the pushing action at the umbrella handle by the driver’s knee mushrooms the braid without fully releasing the rear brakes. I basically consider mine to be a single use emergency brake rather than a parking brake since it mushroomed first time I tried it 15 years ago. Worked it back to full release, found it troublesome even with cable cleaning and lubrication, and never yet needed again.

The throttle line for the Mark IV is much shorter and may be easy to maintain properly with or without braided line.

Herewith a set of photos of the Mk IV hand throttle. The principle is that by winding the knob out, the wire is drawn up, pulling up the idle stop crank at the carburettor with it. If you look closely at the end view of the ferrule, you will see small V grooves set at quarter points. These are to lock, or more correctly hold, the stem at the setting you want. The locking is done by the ball bearing (I think 1/8" dia) springing into each groove as it rolls past. The ball is set into a through-hole in the stem, but the hole is a reduced diameter on the far side, which prevents the ball from passing through. The wire is then fed through the stem past the ball and provides the necessary pressure on the back of the ball, like a spring, so that the ball ‘clicks’ into each indent groove. A wire wound or braided cable may not provide sufficient force here.

The other point to note is the setting of the knob. It should be screwed down onto the cap on the end of the wire and backed off a part turn to allow the wire to freely turn. The knob is then locked with the collar nut. It is necessary to have good lubrication to allow the stem to turn freely in the ferrule and inside the knob. I don’t know what the cap on the end of the wire consists of as I have never separated one. It appears to be a big blob of solder probably encapsulating a bent tip of the wire, and holding a small washer beneath. The washer bears on the end of the stem, and the solder on the inside of the knob.

I hope this description is clear enough. 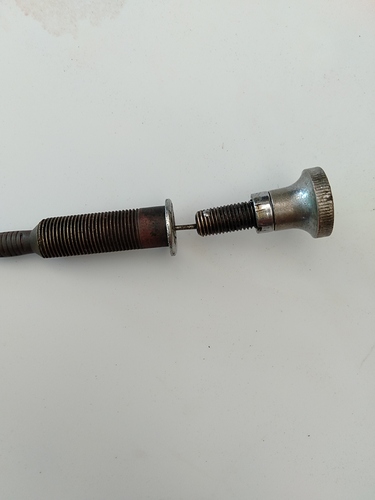 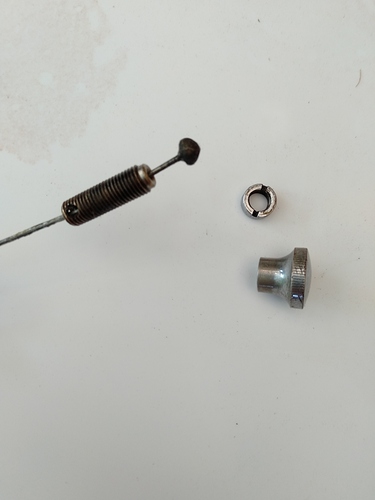 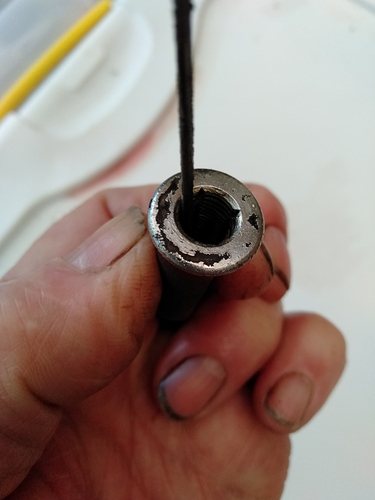 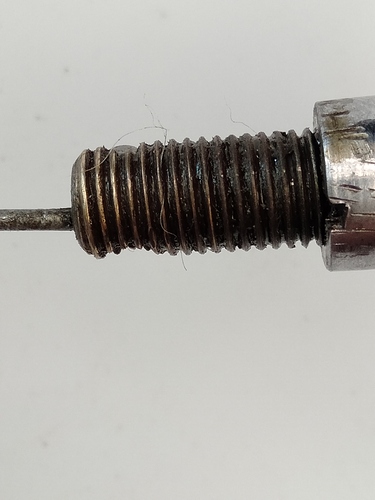 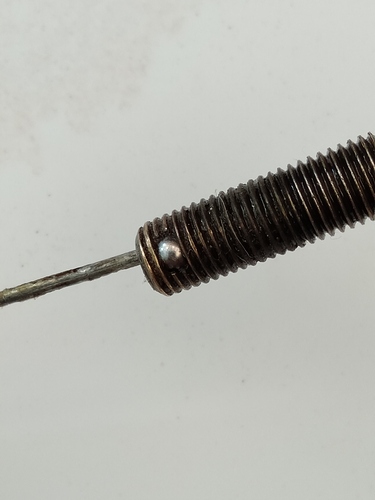 I hope this description is clear enough.

Thank you very much for posting the description and the photo’s.

I certainly have more of an understanding than I did before.