MkIV on auction this month

To me the tool tray looks quite correct. However the engine and cylinder block have a weird colour, some kind of burgundy / dark red?!? They were always black, just like the 6 cyl. engines as well. Good looking car, but I don’t think it will fetch £50k GBP, a 6 cyl car in that condition would be that or 2x as much I think.

Funny, inasmuch as you know I’m not a stark raving purest… Like some are on here! :-)… But I, too, think cylinder blocks should be black.

Unless they’re made out of aluminum… 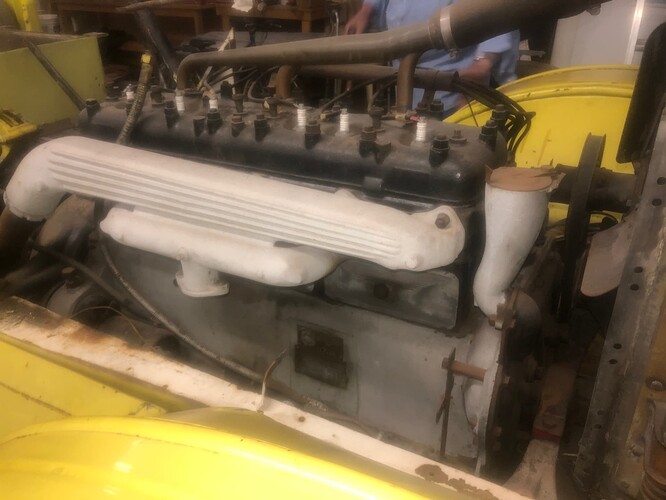 I haven’t made a detailed study of Mark IV tool kits, but it looks ok to me too. Roger would be the expert I would go to. 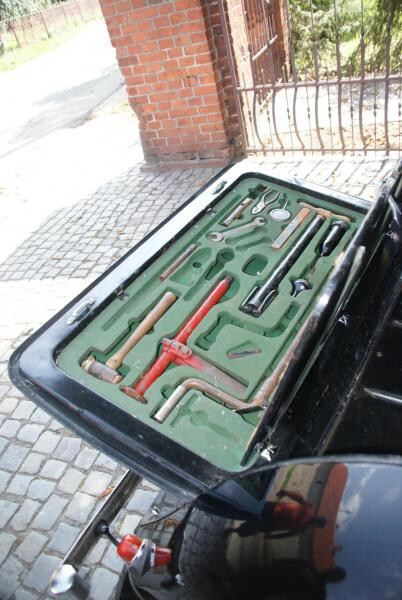 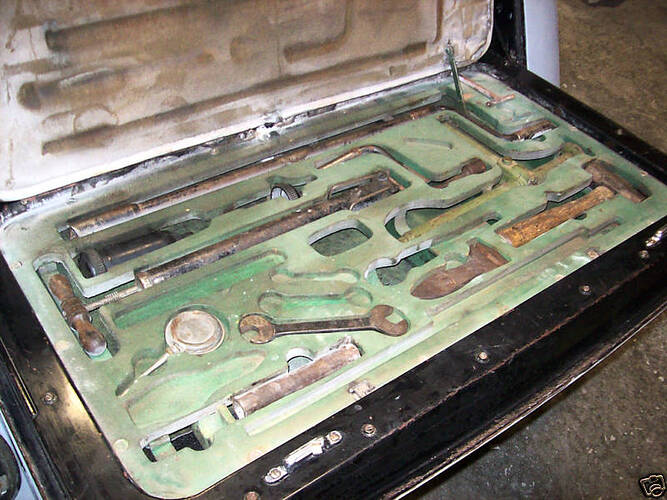 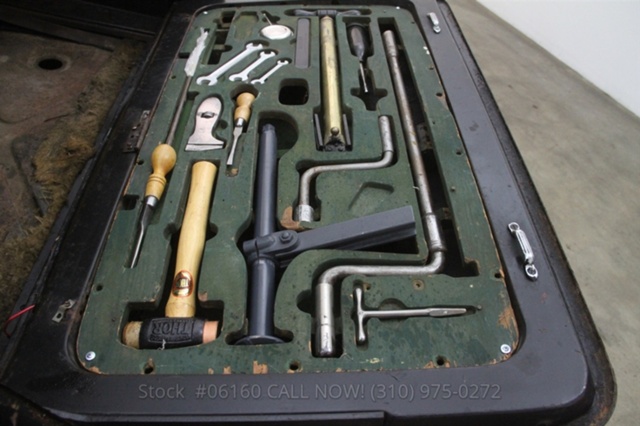 My '38 came to me with the engine brush painted pastel green, pastel yellow and with red fan blades.

After quite a bit of careful research, I drew to the opinion that pre-war blocks and heads were a medium grey. Black fan hub, unpainted blades. That’s what I went with anyway.
Ed was of the opinion that red blocks make them go faster. But maybe he meant across the auction stage.

Regarding the HISTORICS.CO.UK 1947 1-1/2-litre to be auctioned - as noted this car is 412220, a car built on 8 Feb 1947 - so one of the earliest surviving Mark IVs in registered/going condition, and although much of the car has been restored - will let others comment - its Tool Tray is unrestored, and indeed although incomplete, is one of the nicest/correct Tool Kits I have seen, albeit it has been tarted up sadly for this auction, with a wrong tool added, and a few tools repainted black…
See below, a photo of this cars tool kit taken in 2018, before efforts to ‘tart it up’ - note same photo as Rob R has shown… 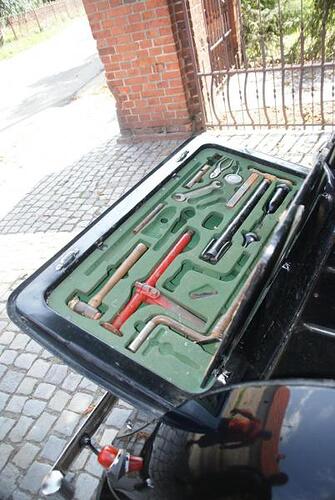 412220 ToolKit402×600 49 KB
Note that the Jack was originally/correctly painted RED, with the outer end of the lifting arm left blackened steel. If you look at the current auction photo, Jack is now incorrectly painted Black all over, as indeed have most of the other tools to ‘tart it up’ The Starting handle and Dunlop Tyre Irons were originally painted black, OK, but the oil can was originally tin-plated, and never painted black. A real shame. Also a totally wrong/home made Budget Lock key has been added, missing from the 2018 photo. Otherwise what is there, does look correct/original as far as I can tell without being able to check certain fine detail, but most probably all original, as apart from the black paint tart-up and the added home made Budget lock key, everything else looks/smells correct - you get a feel for this after many years examining/researching… The correct SIZE 1 THOR Hammer is really nice to see, as is the correct Hydraulic Connector screwed on to the PLASTIGUN, and the clear varnished handle on the Tyre Pump, correct for 1947, with later ones painted Black. So real shame the originally correct red Jack is now painted Black!
1 Like
Roger_Payne (Roger Payne) March 6, 2022, 9:48pm #46

Here’s a couple others.

Of Robs three photos - top tool kit is from 412220 as discussed earlier, when it was nice and correct (but missing items) before its now tarted-up black paint for current auction, noting it is 1-1/2 litre thus a couple differences to the 2-1/2 & 3-1/2 litre Tool Kits, in particular having a SIZE 1 Hammer, rather than the six-cylinder cars having a SIZE 2… Tool Trays are however the same for all Mark IV models…
The second Tool Tray/Kit looks totally original but in lesser condition, but WRONG Tyre Pump and Hammer, albeit without seeing better detail of Box-Spanner, Open-Ender and Adjustable cant be sure about these three tools…
The third tool kit is mostly WRONG, tool tray not even installed correctly, missing its hinge for Lid, and all correct screws… The included tools all look to be best guess replacements, many definately wrong - Hammer, Tyre Pump, Budget Lock key, so questionable others without seeing better detail. The Starting Handle and Jack Handle do look to be correct! Jack is strange, looks OK apart from being painted Black, but it should fit easily in tool tray, so something wrong with either Jack or Tool Tray???
So a start, and could be significantly improved with a new owner who was interested…

Footnotes
Like the majority of Britain’s motor manufacturers, Jaguar Cars, as William Lyons’ SS concern had been renamed in 1945, commenced post-war production with a range of pre-war designs. Essentially stopgap models pending the arrival of an entirely new generation of Jaguars, these comprised the compact 1½-Litre and the larger 2½/3½-Litre model. The latter was retrospectively known as the Mark IV after the Mark V’s introduction in 1948, although this was never a factory designation. Built on a generous 120" wheelbase, the Mark IV retained a separate chassis featuring beam front and live rear axle suspension, semi-elliptic springing and Girling mechanical brakes. The stylish all-steel coachwork was available in saloon or drophead coupé forms and featured the kind of luxurious and well-appointed interior that would become a Jaguar hallmark. Used by SS Cars since 1934, the engine was Standard’s rugged seven-bearing six fitted with a Weslake overhead-valve cylinder head and coupled to a four-speed manual gearbox. Standard boss Sir John Black had indicated that the larger engines would no longer be available once peace returned, so Lyons bought the tooling and brought their production in house, relying on Standard only for the 1½-litre unit. In 3½-litre form the Jaguar six produced 125bhp, an output good enough to propel the sturdily built Mark IV to over 90mph.

The current vendor inherited this Jaguar 3-½ Litre around 11 years ago from his father, who had purchased it from the second owner. The latter had bought the car from the original owner, a doctor, in Dublin circa 1970. Restoration was commenced towards the end of the 1970s but stalled, and the car has remained in dry storage since around 1980. The vendor advises us that the Jaguar requires full restoration, although the chassis, steering and brakes are all said to be in very good working order. A potentially most rewarding project, the car is offered without documents and sold strictly as viewed.

Please note that if this vehicle is to remain in the UK, it will be subject to Import VAT at the reduced rate of 5% on the hammer price. It will also require a NOVA (Notification of Vehicle Arrival) and an additional fee of £350 (plus VAT) will be charged on the Invoice to prepare the NOVA. This vehicle will not be available for immediate collection after the sale and will only be released on completion of customs clearance. If you have any questions regarding customs clearance, please contact the Bonhams Motorcar Department or our recommended shippers.

For further information about this lot please visit the lot listing

So went for £12600. Another on auction with car and classic

No - the rat look is in- you now want something underneath that takes it to 60 mph in about 5 seconds!! 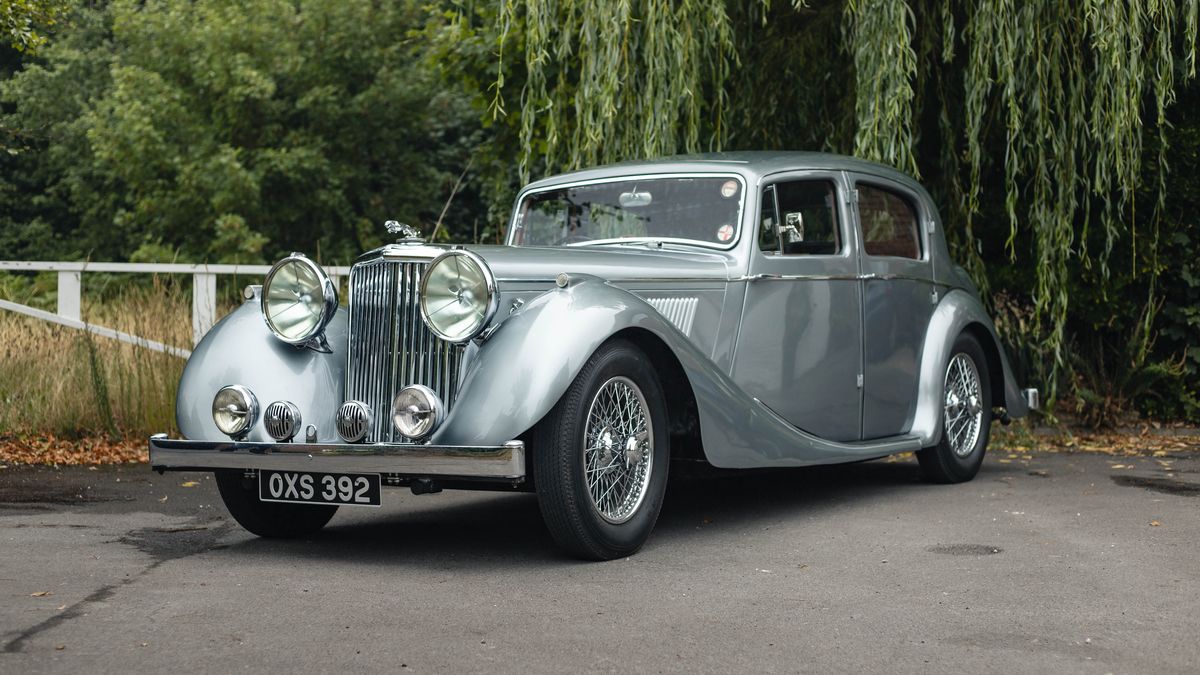 Little less work required but maybe not as much fun?

I have my limits: Rat rodding a Mark IV Jag is it! I just couldn’t bring myself to do that, to that beautiful of a car.

Maybe 5 out of 10 for tool kit; you would think with a bit of effort could easily be much better, given the amount of effort in other aspects of restoration…
Sad about the silver paint job - not an original Mark IV colour, wheras this cars original Lavender Grey is a fantastic colour… in my opinion…