I’m a bit cramped in my XJS. I’ve owned it for 15 years and it doesn’t really bother me, but I’ve always planned to someday figure out how to move the seat back another inch or two.

I have thought about it over the years, and I have never come up with a solution that doesn’t involve raising the seat on new rails, or major floor surgery to extend or relocate the box sections that the seat bolts to.

I was looking at it today and what appeared to be a very obvious answer sort of smacked me in the face.

First I noticed that there is an extra hole in the seat rail about an inch in front of the rear factory mounting hole locations. Here is a pic after I pulled the seat out. Awl pointing to the extra hole. It is 1” in front of the original hole. 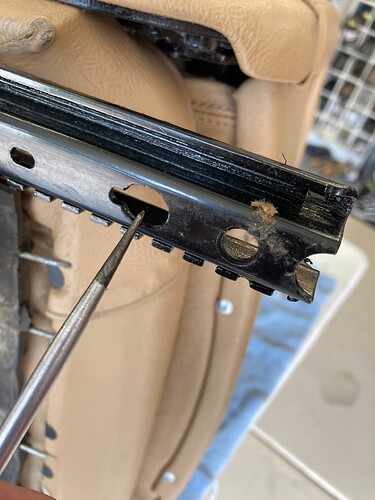 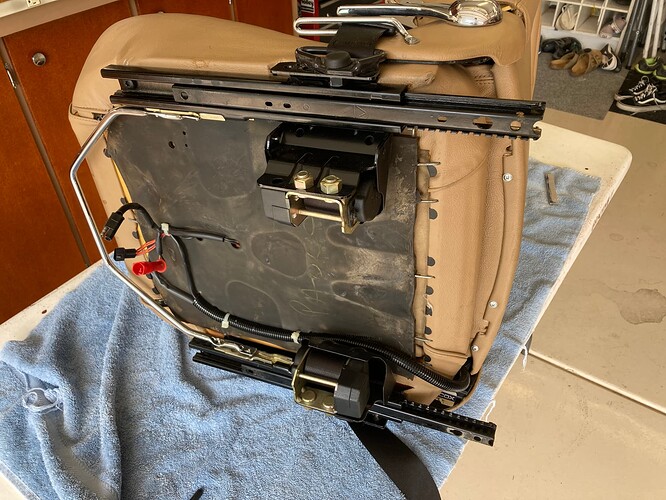 The front mounting points are sort of pockets in the floor, inside of which are rectangular nuts made from pieces of mild steel bar. 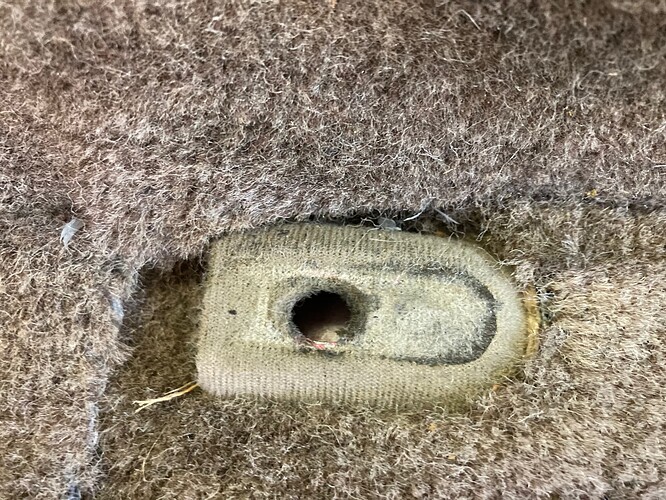 It seems like there is enough room under this pocket to move the front mounting hole 1 inch rearward. If I can then figure out how to make the rectangular nuts work, I can move the seat mounting rails 1 inch backwards.

Here is a pocket with a new hole drilled, and the reworked nut which will work with the relocated hole. 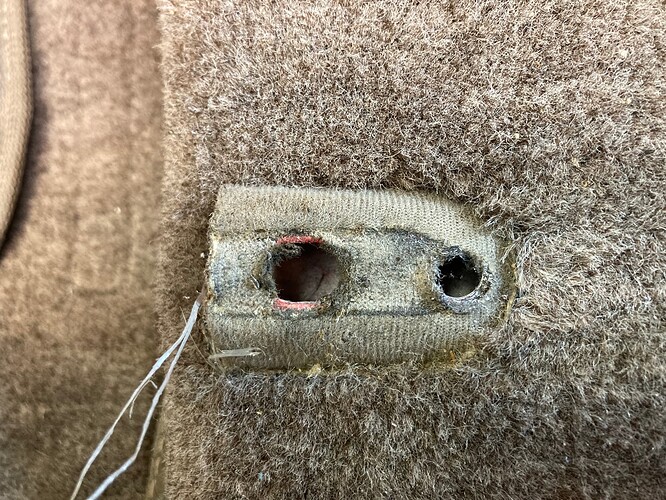 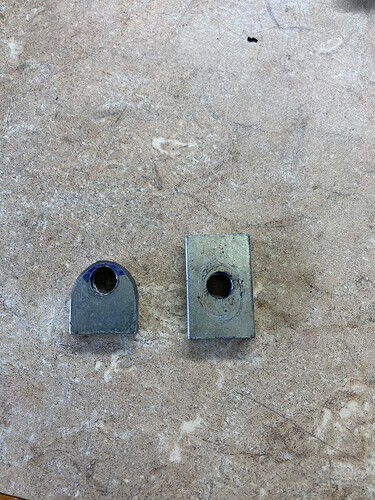 One cannot assume that anything is parallel or square in situations like this, so when I relocated the front holes I was careful with the layup and measured twice, drilled once. 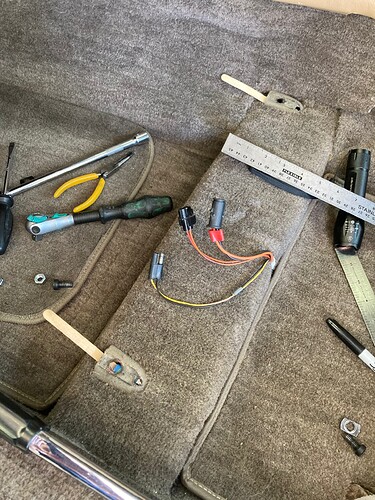 Getting the rectangular nuts to line up is a PITA in the original location, with them now all the way at the back of the pocket it’s going to be a real hassle. I came up with a couple of ideas for temporary handles to allow me to fiddle with them while I attempted to feed the bolts through the seat rail. These turned out to be a pretty good idea. 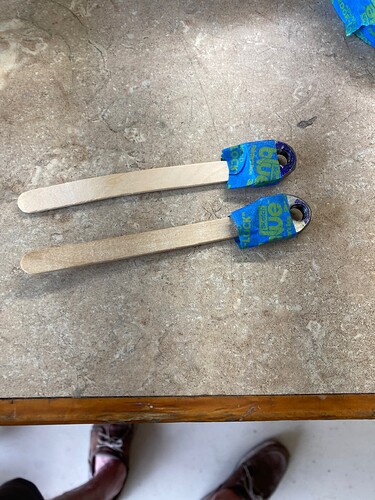 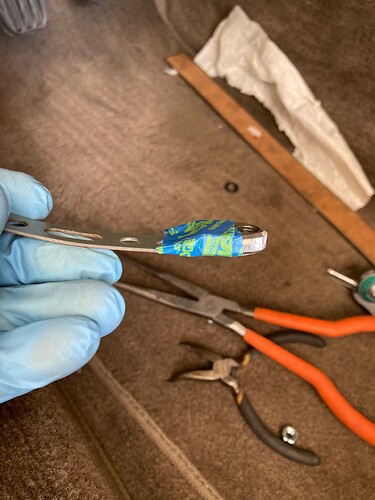 The end result, is holy crap it worked. Seat is now exactly an inch further back than it was before, which is a pretty big deal for me. I’m 6’3”and about 210 (well closer to 220 lately) and especially with the manual trans, this is a much more pleasant driving position. 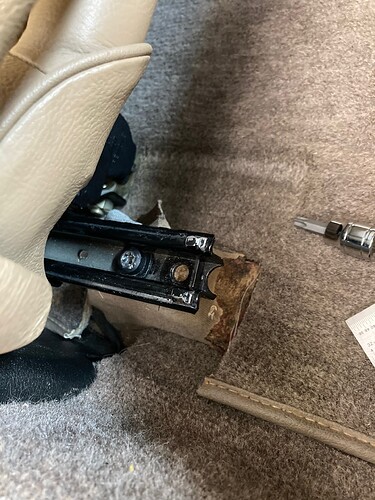 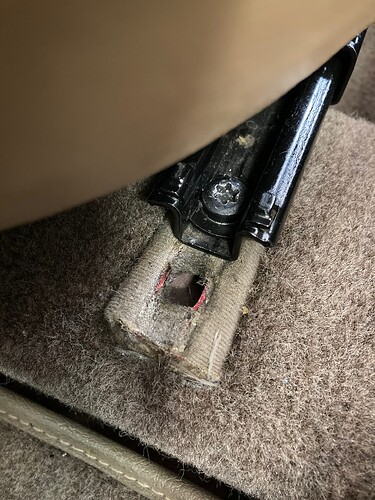 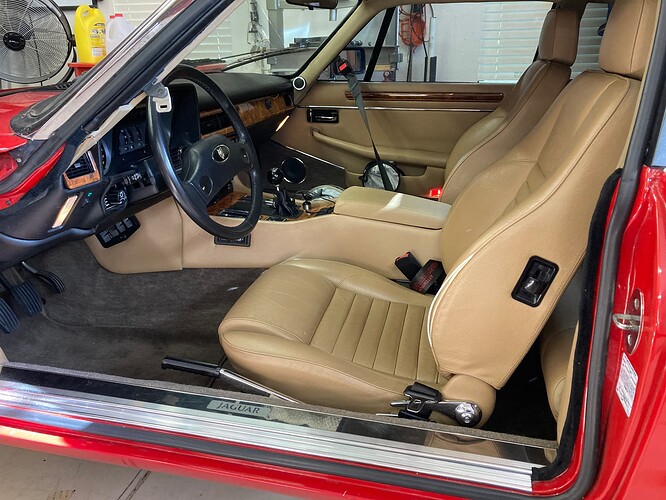 There was an easier mod in Kirbys book that i did three years ago, and also got seat 1" further back.

There is a metal peg that keeps seat from sliding too far back and off the slider channel. Chisel off that peg. Front seat now goes back until it hits rear seat, and then I click it in just forward of that.

Clearly I missed that chapter. I may still do that.

There’s a similar mod to Bob’s for the late models. There is an extra hole in the front of each rail that just has to be drilled out larger to accept the mounting bolt. The hole was originally for a stop to keep the seat from going too far forward. The rear of each rail has a large hole like Bob’s that can be used to bolt the rear down. No mods to the seat mounts are required at all, just the drilled out hole in the front of the rails. It can be done without removing the seat from the car or disconnecting the electrics. Just unbolt it, tilt it back to drill out the holes, and remount it. Instant 1" more legroom.

… Does it make that much of a difference?

I finally decided with one of my XJ40s to fix that lil red wagon, and ordered a RHD parking brake handle assembly from a breaker in the U.K. Pulled the seats and knocked out the blanking plate on the right side of the transmission tunnel (under the carpeting). Jag made them with blanking plates on either side, to suit RHD or LHD models. Installed it on THAT side, and no problemo from there on out.

That’s what she said