Looking for advice on rebuilding the oil filter head and associated parts - the engine is the original SE for a 1955 XK140DHC.

I have installed the oil pressure relief valve (lower in the photo), and the oil bypass valve (upper in the photo). I have three questions:
1 - is there a starting point setting for the oil pressure relief valve (lower in photo) setting? It was around 4.5 turns to undo and release the spring, but I can find no information on how to reset this with a new spring. I have lapped the valve in with valve grinding paste - the new brass valve is a different shape from the original, with a stepped sealing base, and is a significantly closer fit in its bore.
2 - there is no stop on the thread for the bypass valve (upper in the photo). Should this just be tightened until it’s tight in the aluminium housing? I think it was around 15 turns to undo, but if I fit it back into the cleaned up parts it goes right in, to around 17-18 turns before going tight. I can’t see why it shouldn’t be tightened right up, but would appreciate advice.
3 - The bypass valve spring feels slightly softer than the new oil pressure relief valve spring. I haven’t measured it accurately - this impression is just by compressing each with a flat-bladed screwdriver. Is this a problem? I have a new relief valve spring, but springs or complete bypass valves are not available so I have to go with the original. 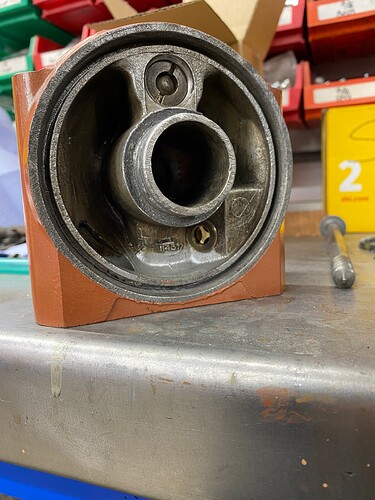 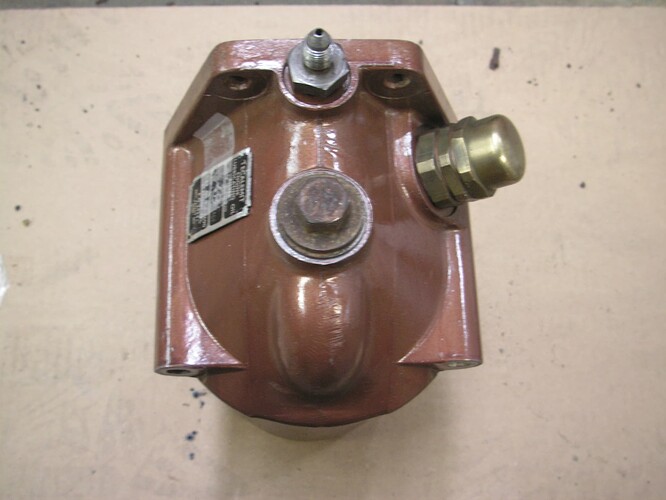 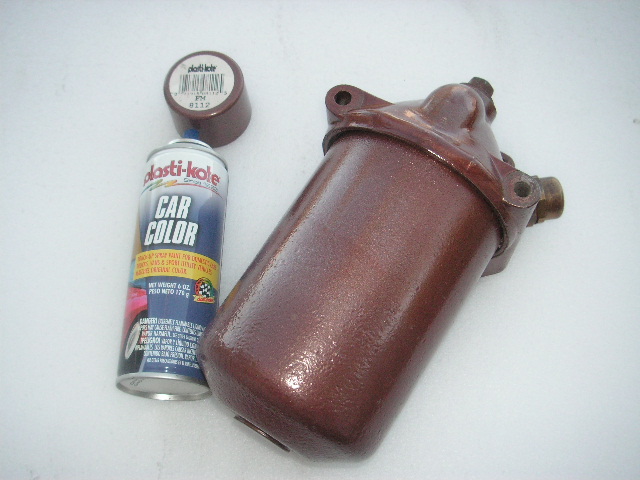 Thanks Rob,
Yes, that’s the one - I’ve sprayed it RAL8029, pearl copper, which is a hammered type metallic finish. I have the Purolator elements.
Wondering about the bypass valve, as it’s very easy to push the brass ball up against the spring, but as it doesn’t seem to be dismantleable and the springs aren’t available (as far as I know), I suppose it’s fingers crossed and hope it works.
The old relief spring and valve were not great - the valve itself could move around the seating quite a lot. I bought a spare valve to see if the housing was better, but it wasn’t - the valve in that one didn’t have the four-bladed end to locate it, so had moved around a lot more and was pretty much useless. That said, the new valve from SNGB was quite a tight fit, so I was careful to lap it in carefully to allow free movement.
I guess I can’t set the relief valve accurately until the engine’s running. Searching threads on here suggests it should open at around 70psi - sound right?

The bypass valve just lets oil past if the filter is really clogged up, so is probably ok, I don’t think you could damage the spring unless you used a propane torch to get it out.
The adjustable valve just dumps excess oil back into the sump if the pump is putting out more than can be squeezed through the bearings, so the adjustment is not that super critical.

Thanks Rob, that all makes sense.
I’m struggling a bit with replacement seals and washers for the FA2690/101 unit.
The only one supplied by the usual suspects (in the UK, at least) is the rubber seal for under the long bolt head - although this is a smaller OD, so doesn’t sit in the well properly. Nobody seems to supply either the big felt seal for the filter top plate, or the smaller one that fits in the lower dished washer. What do folk use for these? Replace the originals, and hope for the best? Buy some rubber and felt sheet and make your own? Three culprits shown in the photo below. 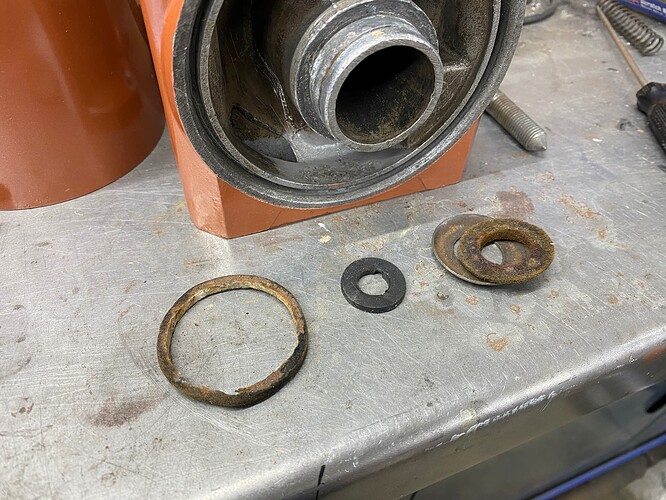 Hello Roger, did you have a look at CoventryAutoComponents? Maybe their product codes 8274 and 8275 are what you are looking for? And as the big felt seal is part of their 8038 rebuild kit, maybe that they have this seal too.
Regards Joerg

Thanks Joerg,
I have seen those, but CA seem to be permanently out of stock. Their website is not great for ordering as it’s not updated often (at least for stock control!), and even being 60 miles from them their online postage rates are a joke. Lorna always asks me to just phone up, but if something’s not in stock they can give no dates on availability. I’ll give her another call to see if anything’s changed.

For the large ring I used a rubber o-ring, and the other two rubber washers I got from Ace Hardware. Do you have a place like a hardware store or home goods that sells repair parts for plumbing?

I’ve called Coventry, who don’t have the complete kit of seals for the oil filter in stock, but they do have the felt items, so I’ve ordered a set of those.
Rob, it’s getting really difficult to get simple repair parts over here these days. The independent Motor Factors are all disappearing, and the plumber’s suppliers tend to focus on all the fancy plastic stuff these days. The old hardware shops have pretty much vanished. And if you ask for anything Imperial, well…
Thanks for all the cross reference numbers for filter elements and the large canister seal. Very useful.

More in general, parts availability is presently rather difficult (to put it mildly) for all Jaguar spare parts here in Europe. Don’t know exactly why but the manufacturing of older Jaguar parts has apparently become very difficult (or no longer profitable?) in the UK lately. All the “regular” Jaguar part suppliers seem to have the same problem: “no longer available” and/or “special order only” are words we see many times nowadays.
The situation in “Continental Europe” is even worse due to the Brexit measures: parts and/or stocks have to be moved from the UK to the European “outlets” of many regular suppliers leading to major delays.
I noticed that some Jaguar part suppliers are extending their range at the moment with new additions (including modern Jaguar parts) but I rather preferred they would first deal with getting their stocks with the “fast moving parts” in order.
Don’t know about the US situation but that’s not so relevant for the Europeans, as shipment of US goods to Europe is at least twice the amount of sending goods in the opposite direction (and therefor ordering in the US is no longer attractive).

May be I should have started a new item here… Sorry for that.

I am going to have to a bit brutal re “no longer available” and/or “special order only” back in 1977 when I did up my XK120 there was only 1 company really selling XK parts if you wanted something you wrote a letter and most stuff was not really available.
I needed a wiring harness only 1 company in the world made something that even then as a 22 year old who knew nothing about cars or XK’s realized was not good enough and effectively we made our on cloth braided harness, every part you want ie door rubbers etc was look at general parts made for all cars to find something that did the job.
I will admit a few items were available from Jaguar.
I was the first person in the world to make a set of parts to convert a LHD E type into RHD. There were many other firsts inc wiring harness engine bay V12 E Type etc etc.
If you give something some thought you can make find adapt something to do the job.
So be very, very, very happy with what is available of the shelf from the multitude of suppliers.
terry

“no longer available” and/or “special order only”

Hi Bob,
Yes, I’ve noticed this over the Covid period - I think the virus is to blame more than Brexit for the availability, but I’ve made the mistake of buying a Triumph rear axle unit from the Netherlands, and a set of wheels and tyres from Germany over the last few months. The Triumph axle was a joke, DHL took it to the port to come over here and then took it back to the supplier because their truck drivers were not allowed the time to isolate on their return. When it eventually did arrive, the duty payment was very large. The wheels arrived just a week ago, and again the duty charge was over £350 as they were now a foreign import. Two years ago there would have been no duty payable - thanks, Brexit.
I’m at the finishing stages of my XK now and have had to order quite a few parts - chrome, etc. - which were made to order. All of them have come through OK after a few weeks, so I’m not sure quite how bad things really are. Anyway all of this pales into insignificance compared with trying to find parts for a 1937 Riley, which I’m halfway through! The owners’ club has had to set up a company commissioning manufacture of the important parts.

Back to Oil filters.

Later I learned that this was not the correct version used on the later XK 120s from engine W.4383 onward (Spring 1952). Other sources (including Urs Schmid) mention Tecalemit FA.2678 as the correct version which unfortunately is entirely different from the FA.2690/101 and spare parts are very difficult or even impossible to obtain.

If so, that would mean that all parts for the FA.2678 (as used on the later XK 120), are identical to the ones of early Oil Filter FA.2045, except the 3 parts that have been mentioned in the SPC J8 of 1958 (being Element, Canister and Bolt). So also the Filter Head would be identical apart from a different Type Plate of course.

Can anybody confirm that this is correct indeed for the later XK 120s?

Ignoring the number of turns here I just measured a few of these. I just measured the depth of the slotted brass retained below the casting and found a few averaging .075 for the large one and .055 for the smaller one. If you want that in number or turns count the pitch of the thread and work from there.

Absolutely correct that there is a serious mistake (one of over 100 though some not so serious) in the latest XK120 SPC, in listing the XK140 filter assy FA2690/101, and Viart just followed it without checking with us.
The correct info is found in the Mark VII SPC. 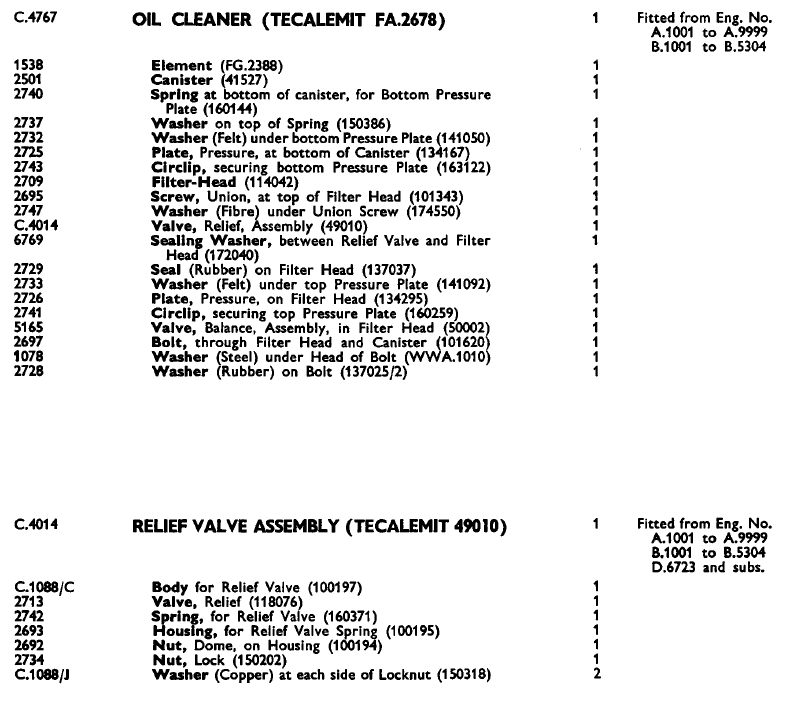 It can easily be recognized by a really huge bolt head on top.

The old hardware shops have pretty much vanished.

That’s sad to hear. Probably your best bet is to make a washer out of a sheet of rubber.

I think you’re right. I’ve had real problems getting 3/8" copper washers recently, so on the advice of a good friend in US Cobra circles I bought a good quality Mayhew set of stamps for making washers etc. in Imperial sizes. All you can get in Britain now is 10mm, which is not the same. Sadly, I had to buy the stamp set from the US - it’s not sold in the UK. The stupid thing is, it was made in France, pretty much the first place to go metric…

Thanks Rob, I found that survey in the MK VII SPC. So now I have to start looking for an FA.2678 Oil Filter, but that can wait. The FA.2690/101 I had rebuilt (see pic) can do the job I assume and may be it’s more my pride to go for the “original part” than that this would influence the engine performance in whatever way. 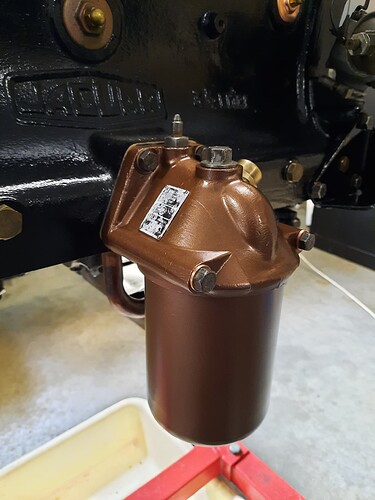 I looked in my local hardware store for the top bolt washer and found 7/8" OD x 3/8" ID, but the problem is the 7/16" ID is not made, non-standard, probably why the Jag part chain can’t get them. It could be drilled out of course. Let me know if you are stuck and I’ll send you one.