One can easily do that, by using the bar that holds in the nipples.

That’s exactly why I sealed and reused the factory nipples. Everything fit as designed.

I use a filter block like this on one of my cars. I had plugs welded to the outlet ports to close them, and removed the spring loaded bypass valve shown on the left side of the photos. It unscrews as I recall (I did this 20 or so years ago). The oil exits the engine into the lower chamber, and removal of the bypass valve permits it easy access to the upper chamber which is the entry point for the filter. Filtered oil returns via the D shaped hole where it reenters the engine. XJ6 filters have internal bypass mechanisms for situations where the filter gets blocked.
These filter blocks have 60psi springs in the release valve, so bear in mind when cold the thing you use to seal the cooler ports will see 100 psi. I wouldn’t trust staked frost plugs. I’m wondering if you could tap the ports and fit a pipe threaded plug.
My advise to you is to search out a filter block from an earlier XJ6 that didn’t have a cooler

So John, it is not a question of restricted flow from exiting at 6 o’clock vs. exiting at 9 o’clock, just an easier path if you will. I’m not sure what I’ll do with this, but there should be sufficient pressure to route the oil the extra distance.

The O-rings are not in compression, but the diesel mechanics who gave them to me says they use them in this manner frequently. Still, I think the O-rings are redundant. The freeze plugs were provided by an engine machine shop. They’ll have 0.030" compression when installed which is substantial and I’ll use a sealer to boot. That said, the machinist and I had though we’d stake them for extra security…until the diesel mechanic pointed out what holds the factory fittings in place is a flat bar across the ports secured by a bolt. This is what Wiggles is also stating…as did you. And John, I did at first think to truncate and braze the factory nipples as you did, but this is neater IMO. It also is easy to see if I have a leak and easy to re-do the setup. As Terry did weld shut the cooler ports, I think what I’m planning will be equally effective and still allow me to add a cooler in the future. By using the factory setup of a steel bar across the ports/freeze plugs secured by the factory bolt, I do not see how the freeze plugs can escape. Leak they may perhaps do, but I’ll bet they won’t. Like John has said from the beginning of this discussion, I must remove the bypass valve and several of you have suggested the same.
I’m gonna do it. I’ll report if it works as planned. And many thanks to all of you for your comments.

I suspect if you try to press freeze plugs into the aluminum casting with .030 interference, the casting is going to crack.

Good Lord, I hope not. The machinist says it’ll work. Maybe I’ll heat the filter block in the oven at 350F for an hour and put the freeze plugs in the freezer before marrying them up. $5.00 @ 2:1 odds. Any takers?

Given the consequences of a failure I’d be reluctant to rely on an interference fit keeping all the fluids where they ought to be. But then again I’m overly cautious about some things.

arrragh…typo it is. John, there will be the flat metal bar across the tops of the freeze plugs held in place by the same bolt that held the nipples in place. The plugs/O-ring only need to seal maybe 100 psig, the diesel mechanic (farm equipment) I visited says they use the O-ring in this fashion often in applications running 450 to 2500 psi.

I guess I’m not done receiving my allotments of slaps and abuse. I had set this little project aside while I addressed others and today I got out the mic and dial indicator. I’ll stand myself corrected. The plug measures 1.0135" O.D. and the ports both measure 0.9838" The difference being 0.0297 or…0.030"…30 thousandths.
Now I have to agree with Wiggles, for a core plug (or cup plug) 0.030" is too tight and will likely crack the ports. Especially considering the plugs are steel and the oil cooler adapter is cast aluminum. Someone did mention a copper cup plug had been used. (I don’t know where this came from anymore.) Regardless, my research seems to indicate an interference fit of 0.004" ± 0.001" is more suitable; 0.008" is too much. My 0.030" is unworkable. Hmmm…need to talk to my machinist!
It looks like maybe John has the right idea afterall.
Except…I’ve a new idea. I’m going to have a machine shop machine a 1" dia round billet to the exact dimension of the hose connection with a groove for the O-ring. 1" in length. These solid plugs will then fit into the ports, a bridge with a screw will hold them in place exactly like the hose fittings and, like the hose fittings, they will have the exact O-ring to prevent leaks. This should work. I’ll report when I talk to the machine shop.

Someone did mention a copper cup plug had been used. (I don’t know where this came from anymore.)

That was me. The pipe caps for 3/4 inch nominal copper plumbing pipe (the kind that are soldered on) are a perfect fit. The closed end goes inward, fitted against an o-ring or round gasket. Clamp them with the clamp intended for the factory hoses. Also, unscrew the bypass valve (first removing outside slotted screw for access) for maximum flow (mentioned by John in this thread). IMHO.

I guess I’m not done receiving my allotments of slaps and abuse.

Short test: still own a Jag?
Yes… more abuse coming.
No… slaps and abuse transfer to other interests.

An easy alternative is the early XJ6 filter head. Same spin on filter, but no cooler hoses. 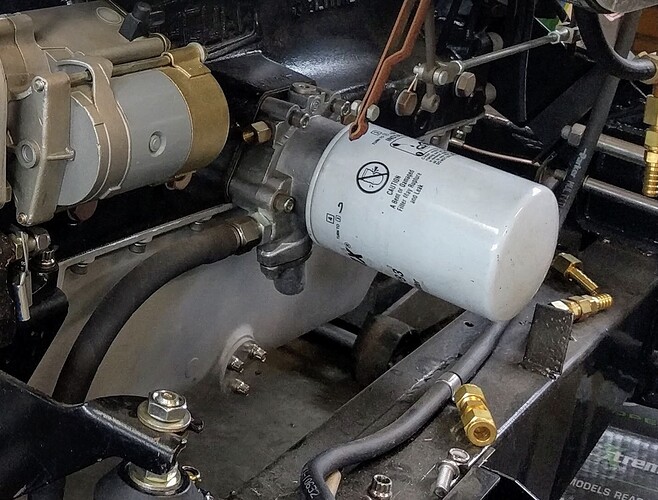 Just tap them 3/4 NPT. You can use standard plugs to stopper them and install hose barbs if you want to install a cooler later on. Done.

Mike,
Where are you running the bypass hose?

Well this gets more interesting with clever ideas all the time. My lathe is broken, so I’ll go for Robert’s copper caps just to give them a try and then a report here. And ultimately Mike (CoolCat) has an easy solution. And one that allows future cooler installation should it be desired. That’s been what was driving me with different options: how to do this without disabling the filter adapter from being a future oil cooler port. I can do the copper caps and the 3/4 NPT at home and move on to something more important. Thanks guys!

Where are you running the bypass hose?

I screwed a SAE straight thread to AN adapter into the sump drain. I did that to protect and preserve the sump drain threads. Oil changes I just disconnect the AN hose fitting and leave the adapter in place. I was having a bunch of parts cut out with a water jet, so I had a little plate made to block off the stock return port on the side of the sump.

That’s a pretty slick installation Mike S. You didn’t even have to fool with disabling the bypass valve. Looks good too!