For 7800 miles ago I replaced oil pump, the hydraulic chain tensioner, the cam shafts bearings and connecting rod’s big ends bearings. I also replaced the main bearings on crankshaft without grinding the crank, the engine was still in the car. The clearance was not that bad. After that I got a really high pressure, full scale when cold. Also with warm oil it was 50psi. Gradually the oil pressure dropt over time(years). Especially with warm oil so it ended up with almost zero with warm oil at idle.
This winter I made a replacement of my Moss gearbox to a T5, note the car is a 3.8litre.
An engine out job. I replaced the rope seal to a modern type. At that time I also grinded the main bearings on the crank and replaced with new bearings. The clearance on the crank are now perfect.
I have not checked the bearings on the cam shaft but I don’t expect that they can cause a pressure dropp.
But the oil pressure is not what I want. With 20W50 with cold oil at 1500rpm it is 60pis, idle 20psi , not so bad. With warm oil at 2000rpm it is 20psi and at idle close to zero.
I have checked the oil relief valve and cannot see any problem.
What can cause a pressure drop with warm oil with engines that have all main parts almost new?
It has only run for 7800miles.

Probably a stupid question but have you fitted an OE oil pump?

Hi
It was bought from SNG Barratt.I will try a new oil pump, the pump is my main suspected part.If it is the pump I will inform SNG Barratt about it.
best Tjellvar

I would certainly fit a genuine Jaguar oil pump.

Are these O/P readings from a proper pressure gauge, or the original sensor & gauge?

I was supplied with the wrong O rings for the oil pipes, the mating surfaces of the three bolt flange on the delivery pipe can be suspect letting hot oil bypass the system, did a complete engine strip on a 3.8 years ago to find this simple gasket was the sole cause of falling oil pressure when hot…to check the O rings and this gasket hold your car at 100 mph and watch the pressure…15 psi mine would drop to…just something that could happen to anyone if it happened to me…

Before I did the overhaul for 7800 miles ago I had an external oil pressure gauge and it show the same as the original, so I don’t expect the pressure gauge. Tomorrow I will measure the oil pump according to the manual, also compare with the original that I still keep. If I don’t found any obvious reason for the pressure drop I will anyhow replace the oil pump.Any suggestions where I can buy a oil pump that last longer than a trip round the block?

Rob Beere…you do have the correct oversize main bearings marked plus 10 ???only when a pump has been scored with swarf and bits of spring does it fail to produce adequate pressure at low rpm…in my experience…

The oversize is +20 on the main bearings, the diam. clearance was measured to .0025" with plastic gauge.I will check the oil pump tomorrow according to the service manual, also compare it with the old oil pump.As I see it everything except the oil pump is checked that possible can cause the low pressure.

I have now change back to the old oil pump.
No improvements. Interesting is that the oil pressure does not increase with RPM. Almost the same pressure at 1500 up to 3000.
The old oil pump was within limits according to the service manual, and it did not show any wear on the insides.
The surface looked fine. The pump did have a bad O-ring on the output so I replaced it.
The “new” pump shown wear and scratches on the inside but measured OK with a feeler gauge according to the service manual.
Is the hose from the relief valve used for returning the oil back to the sump used for other than the oil from the relief valve? There is a hole in the cylinder block. I tested with putting an extra hose the relief valve in to a bucket and with hot oil it was some oil at idle, it did flooded at higher RPM.

Sounds to me like the relief valve is leaking, especially since there is no pressure increase with revving of the engine. I can say that the earlier engines had the relief valve dump (any) over-pressured oil (over about 63 psi) back into the sump via a hole drilled thru the block so even though your set-up seems to use an external dump hose, it seems that hose is only for pressure relief and should NOT have any oil flowing thru it until at least 60-65 psi is registered on the O/P gauge. I would simply block that hose and try more testing/revving.

Just my 2 cents worth, my 83 4.2 would hold pressure just fine until warm then stopping at idle the pressure would drop to zip. On a nice hot day at the end of a spirited run I pulled over and my grandson jumped out, wacked the filter housing and the pressure jumped up to 40 psi instantly .
Pulling the pressure relief valve out we found that the chrome plated piston had worn two steps in the hardened (carborized) cylinder bore. We polished the piston, honed the cylinder and all has worked good sense with about a 5 psi drop in pressure due to the extra clearance.
I am planning a winter project to replace the steel piston with a plastic one (Torlon 4300), and the cylinder with a hardened tool steel one. As a safety precaution, we are thinking about adding a shut off pressure sensor switch with an audible warning, just in case my material selection is flawed.
Ken J

Hi Tjellvar,
According to your identity icon you have an E-type and you said it is a 3.8 so I am assuming you have the original oil filter with the canister sticking out to the side. 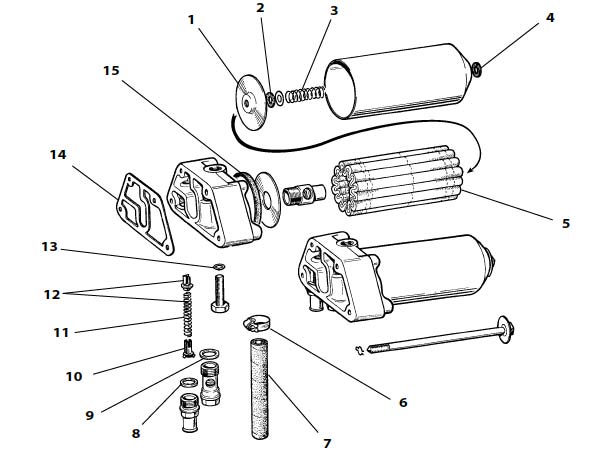 I think Lee is right, your bypass valve is not seating, letting oil dump back into the sump.
The hose just goes back to the sump.
There is another dump hole in the block which is used on other versions of the engine with different filter heads.
This is a 2.4 Mark 1 block. 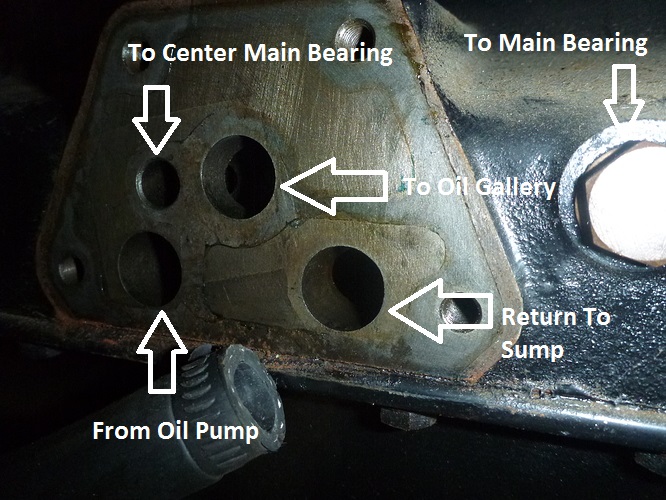 I have two springs for the relief valve, one as a spare. You never know .-)I will extend one and do a new test.

As I say I did a test by attaching a hose to the relief valve and the oil was hot, (the other end to a bucket).When I increased the RPM it was quite a flow of oil. The pressure can not be higher than 20PSI at that time.The (see picture) “Return to sump” hole confused me, I though it may be some other parts of the engine that send oil back to the sump via the relief valve hose. What is the use of the hose in this case.Also at idle it was some minor flow. I had the oil filter housing on a bench but could not see any problem with the relief valve. The surface of the valve and the matching surface of hole looked fine. Note it is turned the right way. I guess a rubber gasket on the valve is not the right way to seal it.The engine is from 1963, sitting in an E-type.

There is another ongoing discussion on this forum involving a 2.4 Mk1 with no oil getting to the camshaft. Here is a picture of his filter head. This is the valve that dumps excess oil back into the sump. I think the E-type head has a similar arrangement. 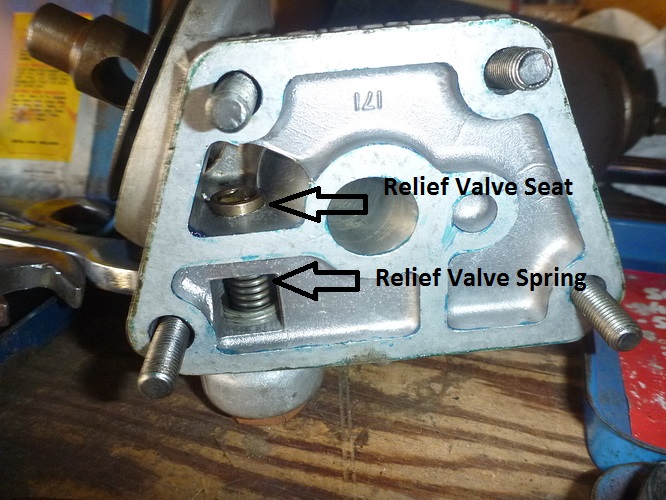 I am beginning to think you are not getting oil flowing through the filter. I don’t know the E-type all that well; is there another bypass valve which lets oil go around the filter if it is clogged up and flow to the oil gallery hole?

When I did my last oil change , I was going to change the relief valve spring , had a new on all ready , but when I took the old one out , there is quite a lot of difference , so replaced the old one , anyone fitted the new looking spring ?

After my renovation for 8000 miles ago the oil pressure was out of the scale on the oil pressure instrument.I thought that previous owner made the spring harder so I order a new one. Could not see any difference.It is the new one that I’m using. The next step is to extend the spring to make it harder and test what’s happening.

As I said before, I believe your next step should be to simply block off the pressure relief hose and then test the pressure at idle. Then, slowly raise the engine RPM to see if the pressure rises accordingly…this will confirm that the relief valve is indeed the problem…very simple test. If you are already sure the valve is faulty, there are calculators on-line which will allow you to calculate the spring rate of the 2 springs you have, which can be used to figure out which the best choice for your engine, (once you calculate the surface area of the pressure relief valve). But it seems the seating of the valve is what needs to be addressed and remedied before anything else.