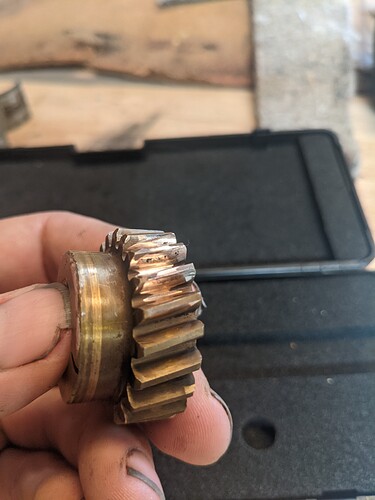 Friends,
6 years and 14k miles ago, I rebuilt my 1959 3.8 (Mark IX) engine, and installed a 3.8 Mk.X crankshaft in the process. (This allowed me to use the later style rear seal.) Everything has been copacetic until the last oil change, where I found a significant amount of yellow metal in the filter. I dropped the pan, and found an even more significant amount of yellow metal in the pan. This has also been picked up by the pump, and has roached the front two bearing journals. On examination, the metal appears to be coming from the oil pump/distributor drive gear, which is badly worn in two places, 180 degrees apart (see photo).

Since this gear rotates at half the speed of the crankshaft, wear in two places, 180 degrees apart, would suggest to me a problem with the crankshaft drive gear. However, I see no visible issue with it.

I cannot recall if, when building this engine, I used the later crankshaft gear off the 3.8 MkX engine, or the original, early one from my MkIX – but they appear functionally the same.

Shaft end float for the bronze gear is .005", and the literature calls for a minimum of .003". There do not appear to be any visible clearance issues.

Would appreciate your thoughts… What am I missing?

Also, anyone got a good 3.4/3.8 crankshaft? This one might be repairable, but is scarred pretty bad from the metal intake…

I would hazard a guess that upon reassembly one of those teeth got chipped or damaged: that said, as long as the gear is mostly intact, and is now worn in, nothing really too terrible can happen.

Also, did you check for looseness of the shaft in the bushing in the block?

However while you have it out, putting in a new one would probably be a prudent thing to do.

This problem is actively making metal, which has roached the crankshaft. 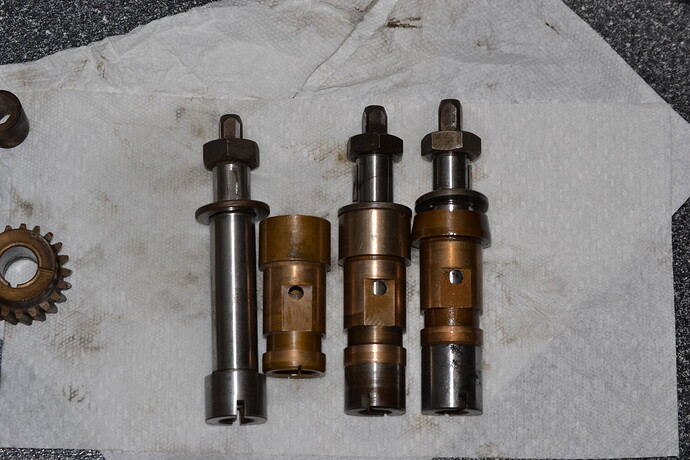 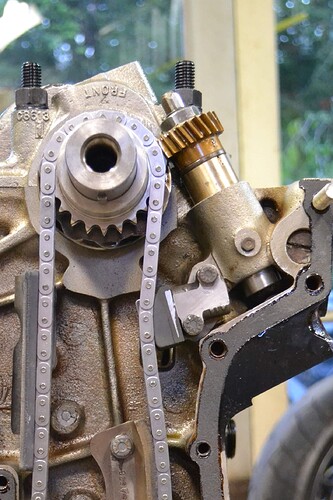 Mike, thanks for the photos & reply. The shaft does not appear bent – and if it were bent, the gear would presumably be wearing only in one place (whichever spot it was in when the clearance closes up). Instead, this gear is wearing in two places, 180 degrees apart. Since this gear rotates at half the speed of the crankshaft, that would suggest to me an issue with the drive (crankshaft) gear – but I’ll be dogged if I see it…

Might you have damaged those teeth whilst installing the distributor drive, especially when you tightened down the nut and locking washer. Do you remember how you held the drive cogs still whilst tightening the nut?

What about a problem with the gear drive on the crank? If that is not running concentric that would give you the double hit per 1 revolution.

Was the bronze gear replaced with new during the rebuild? If not and you tried using the old bronze gear with a different drive gear then some minuscule difference between the two drive gears might have caused it. You have to be super delicate with those bronze gears as they damage easily. During assembly you can’t let it gnash against the steel gear while pushing it on or tightening the nut, or you’ll ruin it.

How is the dist drive shaft bushing? Significant wear might indicate shaft wobble which might cause gear wear. A binding drive dog could introduce wobble. I was shocked at how easy it was to bolt the oil pump down in an orientation where the dog has a slight bind. It happens because all of the aftermarket pumps have mounting holes larger than the dowel bolts. So it is critical that the alignment is verified by jiggling the dog and noting the slightest sticking. Loosen and reposition until it’s perfect.

I have no idea if the part number of the steel gear is the same between those two engines, but I suspect it is. Terry’s might have a new one. I got one there a year ago.

Are you already at .4 over on the crank? No reason not to do so rather than source a new one.

I have to wonder if the bronze dust is the cause of scoring. First it would have to get past the filter, and second, would have to grind a material much harder than itself. I’d expect it to trash the bearing shells, not the crank journals. A more likely culprit is the oil passages being clogged, especially in the crank, and sufficient oil flow couldn’t reach the front.

10 teeth on the steel drive gear and 20 on the brass driven gear. If the damage to the driven gear is located in two locations 180 degrees apart it has to be due to damage to exactly one of the 10 crank gear teeth. It could easily be on the lead in, or edge. Maybe damage from being dropped?

There is very curious wear in the bottom of a few teeth. That suggests something awry.

Post photos of the crank gear, especially on the side that approaches the bronze teeth. One or two must have damage, otherwise your bronze gear has become ovalised somehow.

very easy to damage the brass gear when tightening its nut

if possible, I would;

I presume backlash is too tight to measure with a dial gauge ?

that is how I found a problem with a bevelled gearset, measured backlash on every tooth, which proved out the issue, excessive runout, not before I had spent a lot of time though

The edge of the crank gear would be easy to damage at the edge. The same single steel tooth rubs across the same pair of brass teeth twice per rotation. 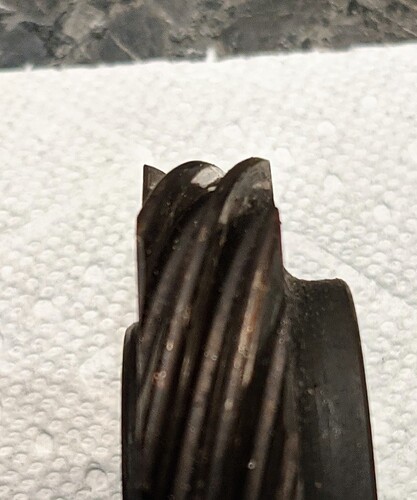 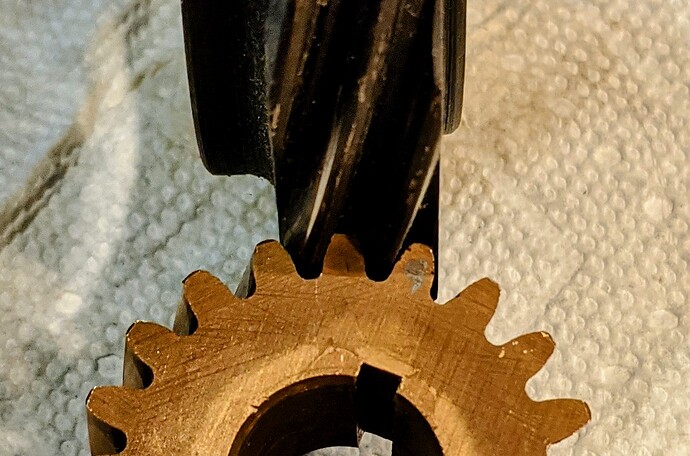