but there are repro handbrake cables out there which are too long… This means they run out of adjustment length before fully pulling both levers tightly.

Thanks for the heads up Marek. I think this has been an issue with mine. I forget who I bought it from many years ago. I’ll try moving the clevis.

they have the full kit. It is not (yet?) listed as such on their website, but I’m told that it is available.

It is a safe bet that the kit can be applied to Series I, II, and/or III IRSs? I think the IRS is the same for all flavors of E-Types (barring minor measurements).
Did they share a price for the kit?? – that you can share?
Craig

There are other threads that can debate the value of the vented rotors. In this case, I opted for them for two reasons. First, they may help to reduce the heat transfer to the IRS pumpkin seals. Second, they just look right to me. I grant you that it is a very weak justification.

In the rear end, the case for vented discs isn’t just an opinion: it does help. Now, the next problem is feeding enough air to them to make them really effective.

All else being equal vented rear rotors would dissipate more heat than no vented just because there is more surface area with a vented rotor. Given that the front brakes do most of the work when stopping I guess the question is, “Do vented rear rotors enhance stopping in anything other than extreme use?”

I guess the question is, “Do vented rear rotors enhance stopping in anything other than extreme use?”

Mostly, no, but sometimes… yes!

I came down Berthoud Pass (@soothsayer1 has been there!) in a spirited fashion, but not in a crazy one.

The brakes began to fade, and it was the rears that were overheating.

I’d classify that as extreme use. We went through there, years ago; 2006. I remember it as a lot of fun. Would you agree that Independence Pass is easier on the brakes?

Would you agree that Independence Pass is easier on the brakes?

Yes, because it’s almost impossible to reach any kind of higher velocity going down it as opposed to Berthoud. I don’t consider going down Berthoud Pass at the rate I was going as extreme, no.

I don’t consider going down Berthoud Pass at the rate I was going as extreme, no.

Let me remind the witness he is still under oath. Did you, at any time, exceed the posted speed limit?

There was the occasional blip into supra limit speeds….If you are familiar with Berthoud Pass, you’ll know there is not many places that one can go that much over the posted speed limit.

That said, it was still not extreme: can we also agree that I tend to know what extreme driving is, as opposed to spirited driving?

you’ll know there is not many places that one can go that much over the posted speed limit.

Oh, but how people try.

When we drove to Springfield Missouri to pick up the FHC a neighbor let me use her truck, a V* automatic that could tow more than our V6 manual F150. I think she had last bled the braked during the Clinton administration. At the end of the long, steep hill into Jasper, Arkansas I found I had no brakes, this despite my being in a lower gear and using the brakes sparingly. As soon as they cooled down all was well.

Berthoud Pass is probably the most dangerous pass I’ve been through. And it doesn’t help that it’s loaded with trucks and tourists with RVs and trailers.

To bring this back to topic, I never saw anything particularly wrong with a well-maintained parking brake mechanism on the Jag: that said, it is only a parking brake.

Again, I live in a dry climate, but Tweety’s parking brake mechanism was OE, and still worked just fine.

That one aftermarket one pictured above looks like a really neat unit, and unlike the stock one, could actually be used as some thing like an emergency break, at least as far as one can do that with the rear wheels. The smart design for an actual true emergency brake was the pre-88 Subarus and SAABs that had the parking brake on the front brakes.

One of my co workers took a rental car back because the E brake wouldn’t lock the tires.
Different times, yes. But it was a rental car…

Not in one of YOUR New York minutes!

Someone was asking about getting more air to the rear brakes, I give you mr Rob Beere’s answer…. 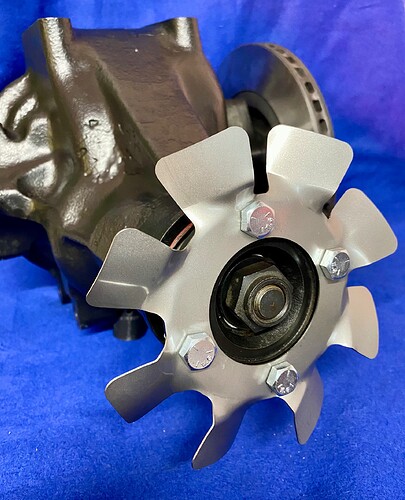 Handy if you drive in the water.

I saw that same prop shaft on a Cuban refugee amphibious boat made from a 50’s chevy truck, and oil barrels. Unfortunately the coast guard had it crushed. The builder made another, and is working as a mechanic in Miami

Have you got a part number for them Angled pads Steve

Hi Ian…no sorry dont have a part number but you can see the box, supplier Ferodo…what I always do is use the readily available type…fit them…then run a hacksaw blade between pad and disc to angle them to fully mate to the disc…takes a few mins…Steve