Very, very strange: started tye car for the first time in 2 months. Both tanks full. As the car was idling outside, I saw the petrol pouring out of the angled fixed pipe under the rear end, under the right tank.
I had the left tank operating.
When I switched to the right tank, the pouring stopped.
I opened the lid and cap, on the right tank, and saw the level of petrol all the way up to the opening, where the cap sits. I never fill it this much at the station.
So, it is as if the left tank´ s pump shoots across to the right tank, as well as forward to the carbs.
Is there perhaps a one way valve or something to prevent this happening……???
I have 4 of these cars, one of which I bought in 1988. And an S-tupe and Mk9. Never experienced this😰

as if the left tank´ s pump shoots across to the right tank, as well as forward to the carbs.
Is there perhaps a one way valve or something to prevent this happening……???

The SU fuel pumps do have one way valves internally that are supposed to stop this exact scenario. The overflowing tank’s pump must have a stuck or damaged valve.

What/where is that part located?

It’s part of the pump itself. Internal. See pic - I circled the valves.

You might be able to tap on the pump to get it unstuck or run it a while on the tank with the pump that has the stuck pump valve. The flow of fuel through the valve may clean it. 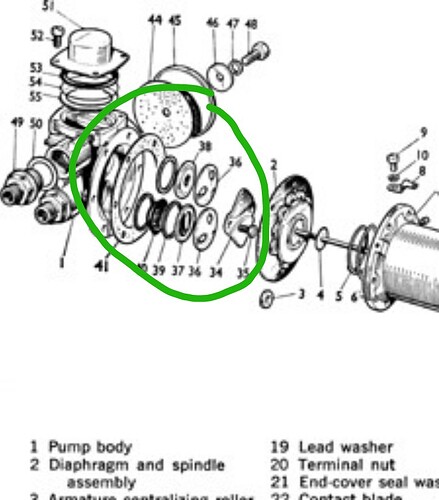 BTW I should mention that even if you have modern electronic SU style pumps they still have the one way valve system.

The problem you’re experiencing is pretty common in dual tank carburetted cars if they sit - especially with ethanol laced fuel.

Because the pump feed lines that go to the carbs connect in a simple ‘Y’ (3 way connector) - only one line goes forward to the carbs - so the only thing stopping the pumps from filling the opposite tank is the one way valves inside the opposite fuel pump. If those valves are malfunctioning as yours seems to be, the left pump pushes fuel into it’s outlet fuel line, then through the 3-way connector and into the stuck right-side-pump’s one way valves without anything to stop the flow. It just pumps fuel through the pump filling and overflowing rhe right tank. It also pumps to the carbs as it should so the car will still run.

There are also other failure scenarios with those pumps that might cause it but if one pump is filling the opposite tank the problem lies with the pump on the side that is overflowing.

A simpler fix than replacing or rebuilding the fuel pump might be adding one way valves to both fuel lines. I think you have a 4.2 Peder? getting those pumps in and out over the tops of the rear fenderwells is no fun. I have to squat inside the trunk to do it - getting too old for that.

Another issue can be the fuel caps, they must be ventilating types.