I am replacing the points on my dual points Mallory distributor in my 1970 XKE series II after 20,000 miles of trouble free service but I figure it must be time to do so. Unfortunatley I don’t have the initial points gap and dwell angle settings info, can anyone help me with this? The P/N of the distributor is 2767801A and I bought it from Grand Turismo Jag back in '97 but I think they are no longer in business. Thanks

Ugh! They’re beautiful when they’re set up right, but it’s so hard.

The initial point gap should be .028. But that’s just a first approximation. Once you get them gapped, put an insulating piece of cardboard in the secondary point set, so it can’t close. Then adjust the dwell on the primary by using the starter to spin the engine. Go for about 29 degrees. Then remove the cardboard and again using the starter adjust the secondary points so you have about 34 deg total combined dwell. Button it up and see how it runs. It may take several tries to get it running well.

The Mallory is totally adjustable, so you can set the curve with various springs, total mechanical advance using the limit screws below the breaker plate, and total vacuum advance with the secret adjustment inside the vacuum pod. Hopefully all of that was set up correctly originally, it’s a true PITA to adjust in the car.

I stopped using Mallory about 15 years ago, when they had a problem delivering workable condensers. Hopefully this is resolved. I converted my Dual point to Unilite, never looked back

Can you give me some specifics on the Unilite conversion, suppliers, part numbers, setup etc. thanks

I used a Unilite module (pn 605) and shutter (pn 323), and modified the breaker plate. It required removing the cam with a gear puller and precisely drilling the plate to mount the module. I got the position a little off, so my plug wires are displaced by one. It was a pretty difficult swap, although it’s been maintenance free for fifteen years or so (I should add that also I use it with an ignition box, currently MSD) Crane used to make an optical conversion specifically for the Mallory dual point, I may have the parts for one of these stashed away somewhere. If you’re interested, I’ll see if I can dig them up. Lumenition still has a conversion kit, only for non-vacuum distributors, so you would need to modify your breaker plate as I did. The advantage of the Crane/Luminition swaps is that the shutters fit over the cam, eliminating a difficult step. There are plenty of folks who have Uniltes on the shelf, replaced with newer gadgets. You might try an ad in the wanted section. This stuff is really ancient history.

The least expensive modern option would be a Pertronix distributor, which uses a magnetic sensor. It’s a drop in replacement and the advance curve is excellent out of the box. The higher end, and much more expensive options are 123, which is an electronic distributor with digital mapping or EDIS, which works off a crank trigger.

Crane is gone, but their products line was inherited by a company called FAST. I think this is the old Mallory conversion: 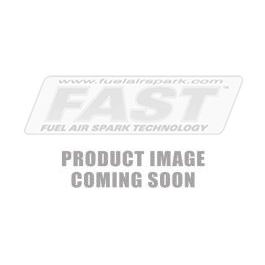 It seems too cheap, and there’s no photo to see what you’re getting. But there it is., I have no experience with this company.