Anyone ever have a rear seal replaced on an XJ8? This thing just pours the oil out, not just a drip. Is this common, or is this just an odd occurance. I am wondering what kind of job this is and what it would cost to replace the seal. Some tell me you have to pull the engine, and that sounds expensive. Any ideas.

I have moved this post to the correct forum, the XJ list is for the S1,11 and 111 models.
Re the enquiry, either the trans come out or the engine. Probably easier to pull the trans for a shop.

Oil gallery plug above the rear crank seal or the seal itself.
Only way to determine is the remove the gearbox to be sure.

Thanks! I thought I had the right category. The answers are right on track, and I suspected it was not going to be an easy fix.

Seal can be replaced with engine in car. You will need to drop the transmission but this is a rather easy job on a lift with a transmission jack. You will need to take off the flex plate to access. Using the factory tool, the old seal comes out and the new one presses in. Check the galley plugs while you are there. The center sealing surface is Teflon which is probably not the problem. The seal has a metal housing that has rubber ridges on it. These dry out and get brittle. Either way, install new seal and all good.

The OIL GALLERY plug ‘weeping’ is Very Common on the 4.0 V8. (one of my XKRs is doing this as we type)

I am not ‘keen’ on pulling my gearbox but I guess it will not seal itself.

All my X308 sedans have been resealed and TIGHTENED when I pull the 5HP24 out for the replacement drum. (I ALWAYS replace the drum on EVERY 5HP24 I get)

The sealing washer is a steel ring with a rubberized insert. They are ALWAYS loose when I check them!!!

The 4.0 XKR/XJR uses a Mercedes gearbox so there is no need to check/replace the front (A DRUM) drum like the ZF gearbox. That is why the only gallery plug leaking on one of my Jaguars is on a car NOT equipped with a 5HP24.

What do you mean by “drum” on a transmission? I only know about drum brakes …

Is that the Achilles heel of the XJ8/XK8 trans ? I have heard that they have problems with the trans on those models, requiring replacement whenever “it” happens … I don’t understand why Jag didn’t stick with the “bulletproof” tranny used on the X-300s and XJSes (facelift) …

The FIVE HP24 replaced the FOUR HP24 in the Jaguar lineup. 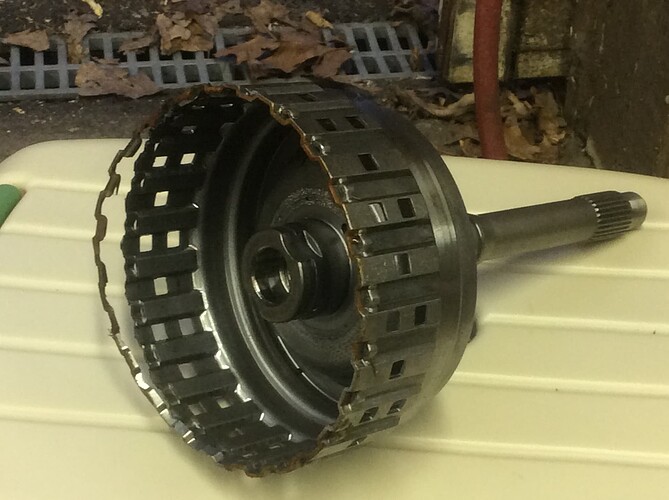 … Are there any early warning signs?

Ugh - just like the OEM timing chain tensioners … although some say you can hear “slack” in the chain for awhile on startup before they snap, sometimes, if lucky …

Well, when it happens, is the car still drivable, i.e. in “limp home” mode, not using 5th gear? Or does the tran shut down completely?

btw, what was the flaw in the OEM 5th gear drums ? and how much mileage does the car usually have on it before this happens (or can it just happen at any mileage?)?

GENERALLY the car adopts 4th gear ‘limp-mode’ to get ‘somewhere’.

If it goes really bad then even limp mode is not an option.

The 4 litre engine had that as-cast cylinders, and high sulphur fuel would just eat the walls. Now, I think they corrected that fault around 2000 or 2001, but one of our gurus would need to verify that. I have a 2001 XK8 (currently in limp mode) with 81,000 and it is sweet (when it is running). The XJ8 I just looked at has the chains and tensioners replaced, and you can barely hear it run, but it has the rear engine seal dripping badly, and that was a problem, and there are two holes (casting) back there that need to be looked at while the transmission is out. The ‘restricted performance’ thing is common, and usually is air leaks in the intake side of things, but some need a new throttle position sensor to make things right. Of course, it is a Jaguar, and the get sold to people with no knowledge, and don’t realize how expensive it is to have work done. If you look on Marketplace, you will find many that do not run and the prices are just ‘giveaway’ prices. Dealers do not want your car as a trade-in. Now that tells you something.

IIRC, Jag did not “correct” the issue … what happened was that the fuel manufacturers ramped down the level of Sulphur in their fuel, probably aware of what was going on …

At least that is my understanding of things …

Jag absolutely did “correct” it, by a) dropping Nikasil from engines and b) replacing those already fitted under warranty. BMW (and Porsche?) did the same.

And when did this supposedly happen, JF? I have been assured on here in the past that the Nikasil issue does not apply to my '00 model XJ8. Supposedly this is b/c, in short, “if the Sulphur has not already done a number on your cylinders by now, it won’t” … i.e. not b/c of any engine replacement by Jag but b/c the levels of Sulphur are now lower …

The TWO things that ‘kill’ the Nikasil engines are high sulfur fuel (already addressed by EPA) and OVERTEMP!

Running the engine in overheat condition will destroy it. (especially the bore)

I know from experience that the blocks were recast and the cylinders were lined with iron sleeves. I chose a newer model to avoid the disaster of the first years of that engine. Somewhere around 2000 is when they started installing the new, revised engines