Why the heck am I having such a difficult time getting these sum bs to operate properly. Had the motors rebuilt but they will not continually follow the operation of the top. One time the right window will work then it won’t. Next time left then neither will work. If I disconnect motor leads and apply power directly via battery charger motor will run up or down based on polarity applied but I think that I may have run it beyond its normal limits and now it has wedged itself and will not operate in return polarity. Any similar experiences and info much appreciated. I have ordered 4 replacement relays for window operation. I have checked relay operation but can’t tell yet where voltage drop is occurring. 12.2 volts at battery and 11.1 volts at left window leads. Please point out the obvious that I have yet to see! Thanks in advance. Lifes Jaguar mysteries are such a hoot…

I recently had a jammed motor on the convertible rear window.
That provoked a fairly lengthy thread which gives you the answer you need.
The clue is the rubber spider in the motor gearbox.
Going by my '88 convertible the motor was actually O.K., the problem was in the gearbox.

Something I might have missed.
The RHS 1/4 window motor not working started this overhaul exercise.
After checking and cleaning, nothing wrong, put it back and worked OK for a while.
Then it stopped again. Took out the whole assembly and noted the motor appeared seized, although it was actually the worm on the motor shaft seized.
That can happen if the motor drives one way without a limit switch to stop it.
When you reverse the voltage to move it back it just does not have quite enough torque to unseize.

I think the rubber item ( spider ? ) in the gearbox is the answer. I theorise it should compress at the end of travel so when the motor reverses the compressed rubber helps to give a bit of added torque to unstick the worm. I did note that rubber was so hard I thought it was some kind of steel spring.
Of course a spring could do the same job.

I did not see any easy way to pull it apart. Any suggestions, anybody done it ? 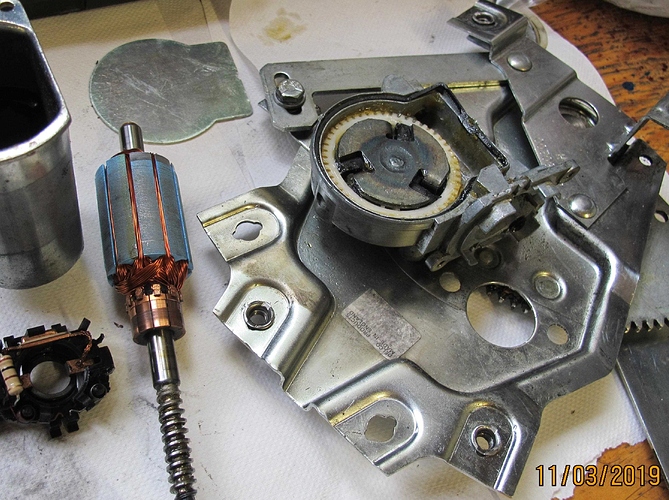 Thanks Richard. Complicated little situation it is. When I run the top up, I am only getting 11.1 volts to the left window.

I suspect cruddy contacts on the relay causing voltage drop. So I have ordered new relays and will try this. I typically don’t have success with my first logical guess at the problem but that is the way I roll. I feel that the search for the answer is part of the Jaguar ownership thrill. Good luck to us all!

New relays will not solve for good the problem of your motor jamming.
Might be O.K. for a while, but the secret appears to be the rubber spider.
My spider had distorted and was not compressing at the end of travel to give a bit of extra torque when the motor reversed.
Trouble is to fix it you need take the small gear off the shaft and pull that spider out.
All covered in that thread mentioned before.
11.1V on the motor might be typical, not sure. The stalled motor drags around 8A and so you get some voltage drop down the wiring and relay.

We had this problem all the time with the rear windows in my wife’s 1990 XJ-S convertible after we got it in 2005 until I made a modification in 2007 to bypass the relays and installed two window switches at the rear of the console. This has worked perfectly for us for the past twelve years. The windows always go up when we want them to, and they always go down when we want them to not when they decide to. Not like before when either of both wouldn’t behave. I removed, disassembled and cleaned the motors, I troubleshot the bank of relays and swapped some of them around, but after two years of living with it, I came up with a permanent fix. This is my permanent solution. Several other on this list have made my modification, or ones similar to it. I think Jaguar made the automated convertible top/rear window system too complicated for long term reliability.

Here’s a link to some pictures that I posted on Jag-Lovers in 2007:

I have posted about this dozens of times on this list and so there is a lot of discussion about this fix in the archives. Just search for my name and “convertible rear window” and you should find a treasure trove of posts.

Thanks Paul. I will take a look at this information as soon as I can find the courage to tackle this job, again.

David,
If you decide to try my convertible rear window modification let me know. I have made up and sold about a ten or so kits to others of the XJ6 switches and connector from my parts cars so that they could modify their cars this way. I probably have enough switches and connectors for a few more kits.

If you are interested please send me a PM for the details.

only just saw this. My windows occasionally fail to operate. I found that my problem is in the switches and a squirt of contact cleaner makes them good for a while. If they are used frequently they are not a problem. I feel that being old and used infrequently they can no longer carry the power. I’m either fitting relays or new switches when it becomes a real pain.
Trev

I’m either fitting relays or new switches when it becomes a real pain.

On the convertible, aren’t the rear windows already fitted with relays?

Ah, yes. The coupe’s rear windows don’t move, but fitting relays to the door windows is definitely a good idea. Probably on the wrong thread, though, as the discussion here is about the convertible’s rear windows which are supposed to move with the top.

Hi.
Rick here in Liverpool. Where are the motors to the back windows located. I would like to lubricate them but have no idea where they are or how to get to them.
Thanks in advance.

Hi Paul.
I tried to new your pictures of the motor of the rear window but I could not bring it up. Please let me know where the motors are and how I can get to them.
Thanks,
Rick

Rick,
These three pictures should help you find your convertible rear window motors. The rear interior side panels are held in place with a few screws circled in red in the attached pictures. Once you remove the screws you can move the panel forward and inboard to access the rear window motor, circled in red in the last picture. The left side is the same as the right side. 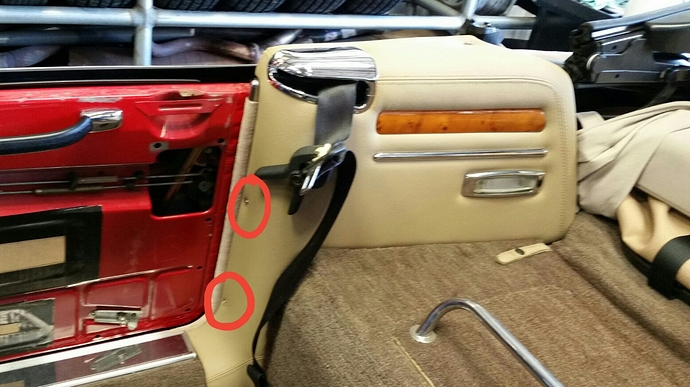 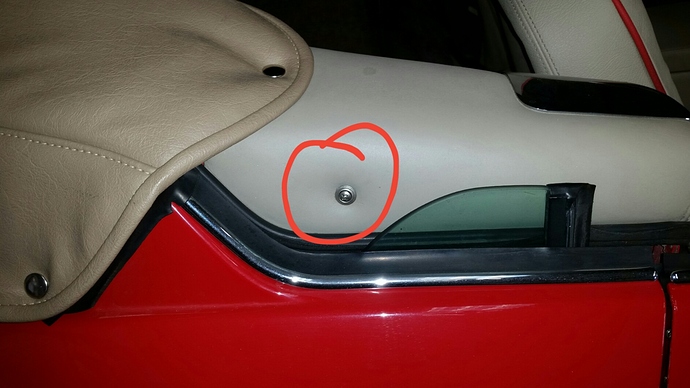 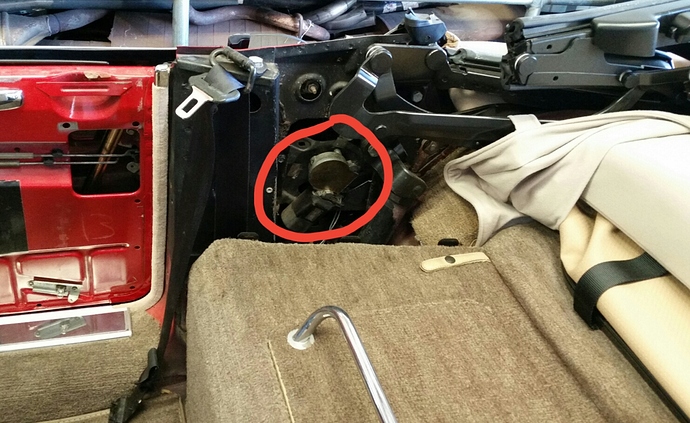 As soon as the weather breaks, I will tackle this job. Is there a simple way of lubricating rather than pulling everything apart?

Thanks in advance, Rick

Rick,
As the archives will show, getting your convertible rear windows working reliably will not be a simple lubrication task. If your experience is like mine you will have to do a fair amount of disassembly, cleaning, removal and replacement, lubrication, and reassembly. In my case even that was not enough and in frustration I modified the rear window wiring to remove the automatic window function and add two new window switches to control the rear windows. Whatever you decide to do take lots of pictures and notes as you do not want to have a situation where you can not close your rear windows.

I understand what you are saying and pictures are always important. We have good and bad weather days. I am going to wait for a time when I can give it my full effort and attention. 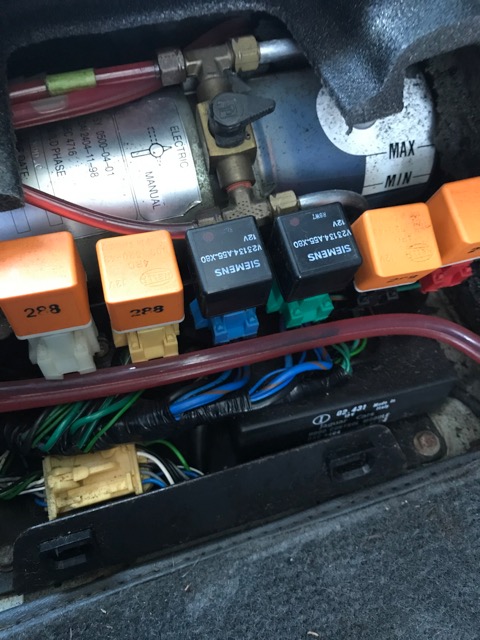 Somehow I recall it was decided that ATF would work.