I have decided to address some rust issues on my 73. My friend and I are (whilst keeping socially distanced) trying to remove a front wing. All is free, except the wiring to the (7 inch) headlight, parking light, and side marker light (US spec) remains. We can’t figure out how to free those lights without cutting wires. I did this ~40 years ago on a 71, and recall accessing bullet connectors under the wing. Can’t figure it out this time, even after consulting archives, the shop manual, and the parts manual. Wires from these lights enter a large grommeted hole that seems to pass into a space between the inner fender and the horizontal surface just below the top of the fender (on which rests the duct connecting the cabin to the air inlet on the headlight surround). Does something unbolt (inner fender, metal on top)? How do I get to the bullet connectors assuming they are there as on the 71? We welcome any suggestions.

Many thanks…we will have another go tomorrow.

G’day Robert,
If you look under the bonnet at the vertical part of the inner wing just forward of the bracket that the diagonal brace is attached to you’ll find a grommeted hole about two inches by one inch. The SIII has a fuse box at this location on one side. If you fish around inside this hole you’ll find a bunch of wires with bullet connectors where you can disconnect the harness to the lights. I think I attached a piece of string to the harness when I pulled it out to help drawing it back in.
regards,
John Hudson
Brisbane Australia

I dimly recall unbolting something inside the wheel well of the S3 and finding the duct behind that. Maybe the wires are there as well. If they are all the same you will probably disconnect the duct too - and when you lift the wing away slowly, would you also have access to the wires?
The S3 has the bullet connectors stuffed into the grommet, the one just ahead of the strut. I would check there first.
There’s a description here on the forum that says to pin out the wires from the lamp connector, which is unnecessary.

David is right. There is a separate head light connector, quite hidden, but accessible: 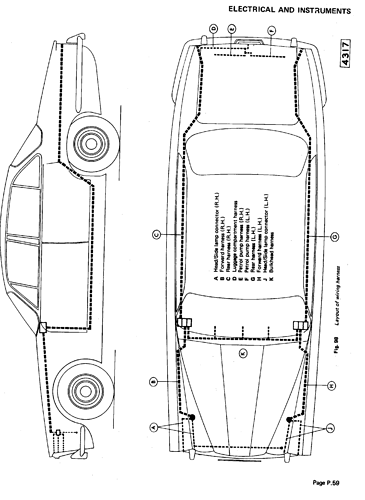 I sort of undid the H4 triple connector to remove the bucket behind the light, but in fact it would not have been necessary.

Good luck - and keep the distance;-)

Thanks to everyone! There’s been a delay but we’re about to have a go starting this afternoon. Will report back.

Got it! Thanks again, including to David Boger at EverydayXJ. Not sure how I’ll ever get the wires sorted when it goes back together, but that’s a while off.

That’s good to hear, how did you get the wires separated then? Through the hole?

Yes, pulled them through the hole as you suggested, David. Some of the bullets pulled apart when we tugged, before they became exposed. I have no idea how I’ll get things reconnected. Those wires seem to run through a “conduit” that exists between the inner wing and a horizontal piece on top…welded together so as to never come apart. It’s similar to the the area in front of the front door into which wires from the door enter. They wind up in the engine compartment, then loop around and return into the passenger compartment behind the fascia.To feed wires from the door into the cabin, I had to tie the wires to an existing one, then pull them into the engine compartment. If there wasn’t a wire already passing through, I could never have managed to feed the new ones. This might turn out to be similar.

While at it, I intend to make the same mods I did years ago on my 71. Relays for the high and low beams (outer 7 inch Hellas), relay and wiring for the inner bonnet-mounted lights (5 inch round Hella driving lights), and relay for fog lights (correct Lucas Square 8–have them but not yet fitted; will be swapping to earlier bumper/bonnet hinges so that the bumper guards don’t foul fog lights).