Another issue with my 94 xjs (outboard rear brakes) is that one of the rear wheel lugs is missing. When I opened the trunk, I noticed a lug with a lug nut loosely screwed to it. It looked like the thread on the lug was compromised, so I ordered a replacement lug, which didn’t take, indicating that the hub is stripped. What are my options? New hub? Anything else? If I order a new hub, is this an easy job to do in the garage, or does it require any pressing etc… 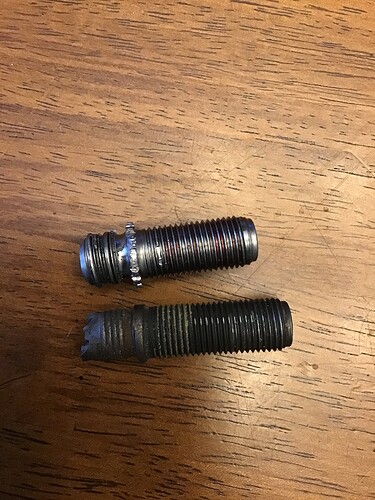 The original lug is the longer if the two in the photo.

Hub disassembly requires pulling, have a look at search option, you will find plenty of topics ‘how to’. Easiest thing - unbolt the hub assembly swing it down and weld the lug permanently. Not sure if that’s easier or more difficult on outboard version…
Easy-ish option - drill it out and re-tap, ask any machine shop to make custom lug with up-size to match re-tapping.
Worst option - try to replace the hub.

It would be worth making sure that heavy-handed gorillas are being supervised while working on your car. Even if gorrila is you

Length has marginal importance, unless lug is shorter than original one. You can always trim it…

It looks like the new lug has been inserted/removed with mole grip pliers. Was it not inserted using the double nut method?

Thanks, looks like I have another project for the weekend. Just took it out for an oil change today (first time I have driven it since bringing home from sale) and the brakes failed close to the house! When I press the brake pedal, nothing there, but the ABS light comes on while pedal is pressed. Heat from front right rotor also, so am guessing piston is jammed and may have blown seal. Sunday’s job as I flush brake fluid also?

The new one went in okay, but wouldn’t torque up (spinning), so you are correct, I used mole grips to remove it, since it was jammed just enough to prevent me pulling it out…of course! Another wast if $25!

Heat from front right rotor also, so am guessing piston is jammed and may have blown seal.

That sounds like a seized piston not releasing and causing brake fade have you tried driving again or checked if the pedal has come back firm?

Depends how much thread space we have there. 6-7mm guessing…? Helicoil’s max torque is rated at full length. Could be difficult to squeeze 100Nm our of it… Same difficult as finding mechanic that will be gentle with it during usual service.

Now I’m thinking. Maybe it’s worth slightly superglue it, then going somewhere to balance your wheels…

Is there a way to convert the hub to use a push-in splined stud? Only difficulty may be that the hub needs pulling to get access to the back of the flange plate.

rather than attempt to weld the stud in place, could it be brazed in place from the outside?

Robin, the pedal went all the way to the floor. I was able to pump it several times to bring it back, but by the time i got home, i had nothing. I will try it again today, see if there is any signs of leaking fluid etc. Will flush brake system this weekend also and see if i can fee up the piston. thanks for your response.

I think you may want to separate out the brake and wheel stud problems into two separate threads.

Thanks Cosmo, my bad. Have started another thread. Appreciate the assistance.

Paul:
Given the complexity of taking the hub assembly apart, I would go for the entire upright.

David Boger at everydayxj if you are stateside…

Is there a way to convert the hub to use a push-in splined stud?

IIRC, there is, but you have to grind part of the head off. And you’ve got to disassemble the rear hub to do the job.

Might wanna do all five while you’re there, to make it look proper and symmetrical.

11 years ago when we bought a 1991 Classic Collection which needed new tires, the RR had one stud spinning in the hub. To get the wheel off we did a tack weld on the back of it to hold it to the hub. Then we got the lugnut off.

When I got the car back home with the new tires, I wanted to fix it properly. I ground off the tack weld after removing the wheel and removed the stud.

As Kirbert mentioned earlier, I used a helicoil. Due to the shorter hub depth, I used red loctite on both the helicoil to the hub and the new stud to the helicoil. Held fine.

As added corrosion protection, I added a thin layer of antiseize on all studs to prevent the lug nuts from seizing in the future.

Been fine ever since. I often check lug torque and still good on the repaired stud. And that lug nut can still be removed normally.

Rich
P.S. I still don’t understand why these were designed this way. Pressed in studs are more reliable.

At times way back, we needed longer studs to use better wheels. Easily sourced at White’s Auto in Texas !!! Knock out the old short ones. tap in the new long ones. Weld in place…

Did that a couple of decades ago on a box trailer project.

I am a big believer in antiseize on lug nuts. talented son not in agreement!!! Loss of friction, loss of lug nut!!!