I’m building up my XK140’s SE 3.4 engine. The head is on, the cams set etc., so now I need to fit the two rear covers to the cam covers. One has the tacho drive, the other is a blank. SNGBarratt sell an ‘O’-ring for these, which I’m assuming is the same for both sides? It’s nothing like the seals that came off, which were square section and a nice fit - the new O-ring is smaller diameter but fat, so is a stretch fit and holds the cover off the cam cover quite a way which isn’t very neat as the two screws don’t compress it evenly. Is there a better solution, other than using a good silicone RTV?

Does that aluminum end cap have a groove in it for the O ring? Some do, some don’t.

Not on the early engines. There is a recess in the rear of the cam cover and head (full circle recess), but the plate that holds the seal in is flat and presses against it. This is why the O-ring does not work well.
I could trim the O-ring and seal with RTV, I suppose, but that’s not exactly an elegant solution.

I could trim the O-ring and seal with RTV, I suppose, but that’s not exactly an elegant solution.

Actually, quite elegant (as in simple), and is how I did them all the time. No leakee!

Well, that’s a good enough recommendation for me, and having searched all the major suppliers it’s probably the only option anyway!
Thanks Paul

The Jag specialist ones I have are a real tight stretch fit over the end cap, presumably in order to get the correct section as a standard part. I don’t see that this is necessary, so I’ve found a supplier of Viton O-rings in all sorts of sizes so have ordered some 28mm ID with a 4mm and a 5mm section - I’ll report back.

These are photos of the ‘square’ o-ring supplied by the factory on the early 3.4 liter engines to seal the cam cover/tach drive interface. Another sealed the opposite cam cover without the tach drive. The fit was perfect requiring little to no sealant to prevent oil leaks. What is supplied today in ‘round’ o-rings is a poor substitute, in my opinion. 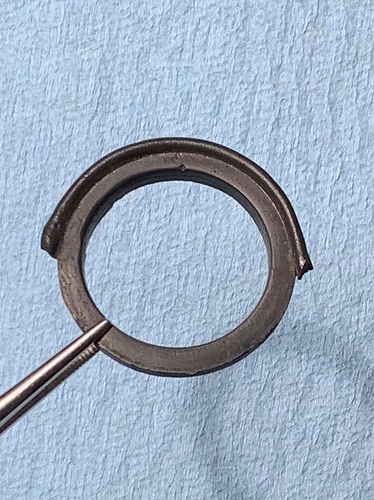 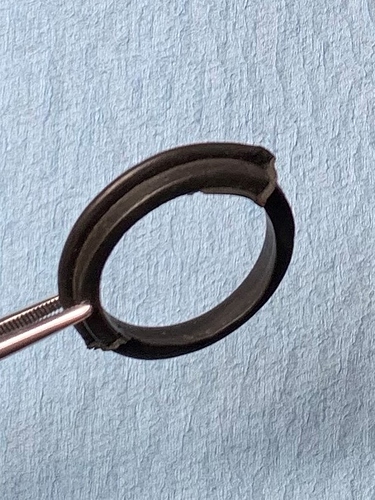 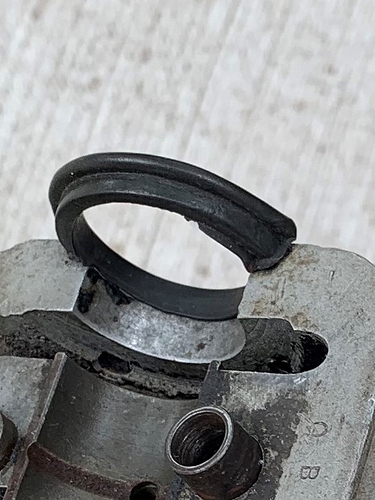 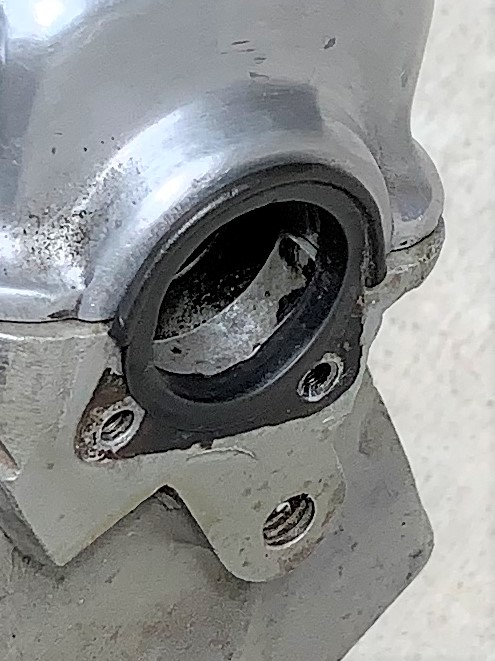 That’s exactly what I have - unfortunately mine are dried out and brittle, or I’d reuse them. Shame no-one can be bothered to make them now!

I went to my FLAPS and got a close fit circular section replacement in Neoprene IIRC. Took a little cajoling but works without leaks, with the help of a little Blue Hylomar.

I have about four of these original factory ‘square’ o-rings in good condition. I would donate them to someone willing to reproduce them and make them available to others. Because of their unique design and shape, I’ve wondered if they would need to be 3D Printed.

My guess is the parts suppliers for 3.4 engines have never seen one of these early ‘square’ o-rings. Thus, they supply a generic o-ring similar to what was supplied by the factory on later XK engines after the cable tach drive was eliminated.

I wondered about the eccentric lip too, but it’s definitely formed extra material, not squeezed out. It seems to be aimed at sealing the cam cover which does ‘sit in’ a small amount from the back of the block. The correct part, as Mike’s post, does fit very neatly. Unfortunately mine are now rock-hard and unlikely to last long.
I couldn’t source square rings (‘sealing washers’, over here) in the right section for the size required, which is with an ID of 28mm (no point in discussing units as nothing is sold here now in imperial sizes). I have bought some rubber (unspecified) sealing washers that are 28mm ID x 4.5mm thick, but 47mm OD so will need cutting down. I have found round-section O-rings that fit very neatly, but these would need a fair bit of RTV or whatever to help seal into a rectangular-section hole, so a washer makes more sense.
I’ll do some experimenting and report back. 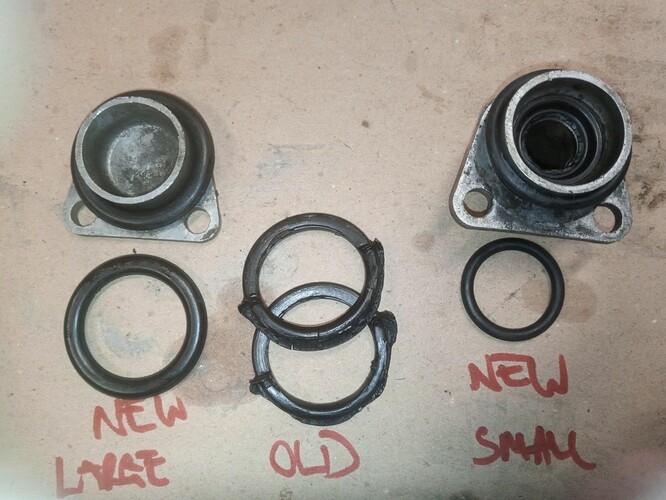 Roger…square section O rings imperial are available in the UK…typically from hydraulic suppliers. …might not have exactly what you want be we arnt limited to metric only in tne UK…have a look here it may help…Steve https://www.fpeseals.com/seals_1/static-seals-o-rings_10/o-rings_14/o-ring-square_175

Hi Steve, I tried FPE but on a simple search anything 1.125" (which is probably what 28mm started out as, plus a bit) does not have the required OD, being only about 0.10" section. My old seals are perfect, apart from being rock hard! They’d do as patterns but I’ve no idea who would be interested in manufacturing for such a small market.
I think part of the problem is that these really are technically washers, not seals, and have a larger section as a result.

I think I have an answer.
I bought some off-the-shelf rubber sealing washers with an ID of 28mm and 4.5mm thickness. These match pretty closely the originals, not counting the slightly odd ‘lip’ around the top half.
I used a 1 7/16" hollow punch with a small sheet of hardboard and a large vice to reduce the OD to match the housing it needs to fit, with a very small amount in hand for crush.
I think the end result should work well, with a very thin smear of black RTV to help. Can’t fit yet as I’m still waiting for some Cometic cam cover gaskets. 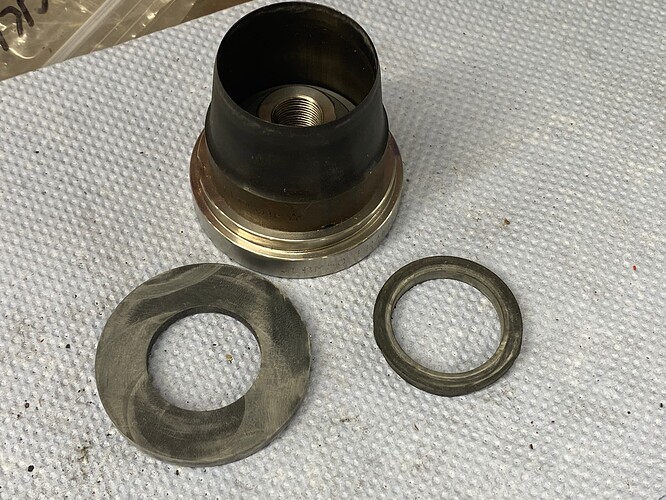 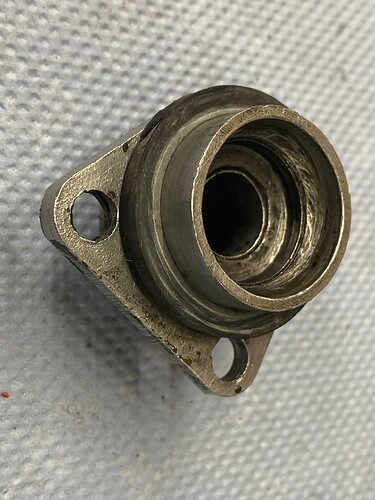 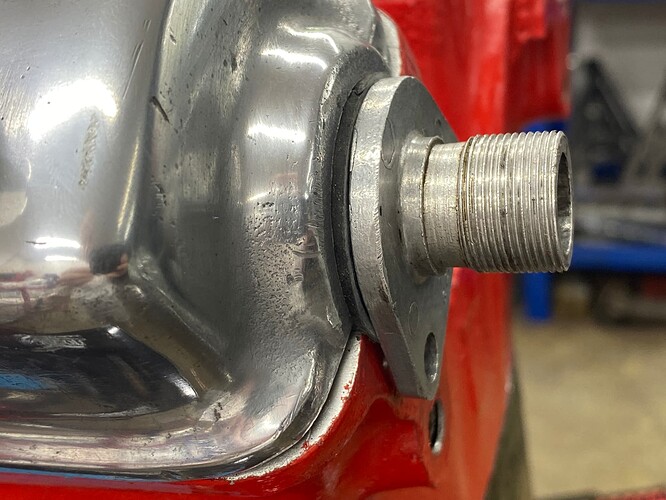 Worth noting that the cut edge is nothing like as uneven as the photos would make you think!

For those in the U.S. who have access to McMaster Carr, this is a screen shot of the specifications for part no. 4061T239. This appears to be their closest offering to the measurements of my originals. I plan to order a package and report back. 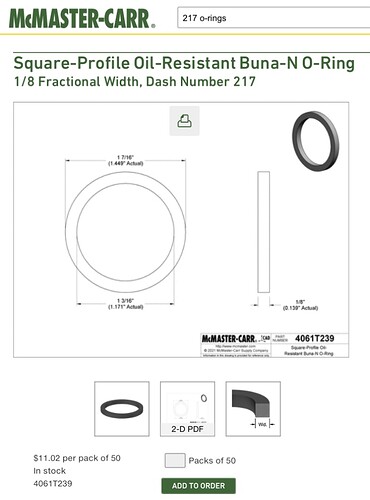 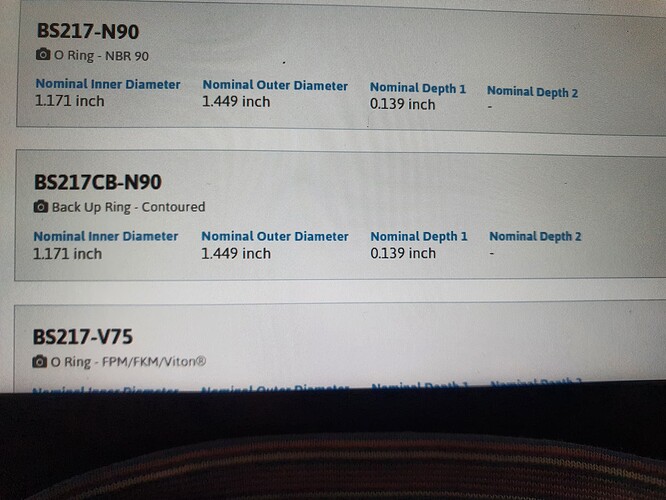 The 217 is close, given the loose fit on the end cap. But I can’t find anything in the FPE lists that have close to the required diameters with a thickness of greater than 0.139", which wont’ be compressed in the back of the head seal housings by my end caps. The depth of those machined square section grooves is 0.16", so I’m wondering if a 5/32" square ring would compress just enough to seal if it’s slightly oversize in the head grooves. It’s likely the early 3.4 aluminium caps were different, I don’t know.
Probably way over-thinking this…
I’ve ordered a few of the size you found for experiment and will report back.

I wonder what their custom price is… could have a small batch done for us, maybe…

My order from McMaster-Carr should arrive Friday. I’ll check the o-ring fit on my spare XK120 head, tach drive, and cam covers to see how they fit. Hopefully, an answer by Saturday.