Can anyone help me with the correct finish for a May '55 140’s seat runners? I have dismantled them and am doing some plating, so would like to get these through the blaster and dip. I don’t think there’s much silver or gold cad plate on an XK140, but I have an idea the seat runners might be. I’m zinc plating and have either clear, yellow or black passivate in the tanks - any advice gratefully received.

Roger,
Your question prompted me to have a close look at mine which are still as I took them off the car. The outer, larger section is just rusty and has no discernible coating. The top of the inner part has a silvery metallic finish, not paint but the inside of this section looks to be painted grey. I think the part with the metallic finish is the contact face with the bottom of the seat frame. I’m not going to guess what the silver colour is, it could just be the the result of the some rubbing movement. The grey paint remains are clear enough so that points to at least part of the assembly being painted.

Thanks for looking, Eric. I hadn’t considered paint, as I’ve never seen a seat runner that wasn’t plated - but I’ve never restored a car pre-1963 before.
The runners on mine have a fine coating of well-established rust all over them, which necessitated knocking out the roll-pins and dismantling to get them properly de-rusted. I had assumed a simple zinc plate was correct, but that said it would be unusual for parts even this old to have rusted enough to remove all traces of plating. I suspect the best source of information might be a FHC, with reduced chances of the runners having sat in soaking wet carpet all their life.
It would be interesting to know who made the runners. My 1965 AC’s are from Leveroll, as are DB Astons and pretty much every other car I’ve worked on, so that might be top of the list of suspects. That said, Leveroll was a London company (ACs were built in Thames Ditton), and I’ll bet there was a Birmingham manufacturer closer to Jaguar. I’ve never seen Leverolls of any age that weren’t BZP.
When you say grey, do you think they might have been painted the same Machine Grey as the seat frames? Is there enough to give you any idea of the shade? Period b/w photos of cars at motorshows or on the production line seem to show a light-coloured finish.

Now I’ve got them in sunlight, I retract what I said about paint. They are unquestionably plated, probably zinc. See pics 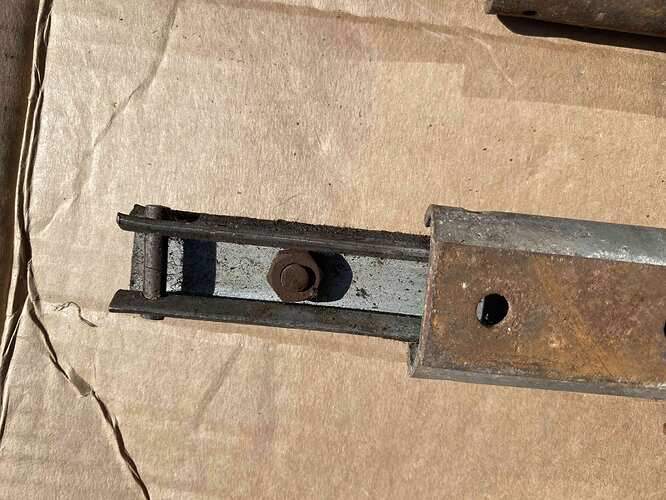 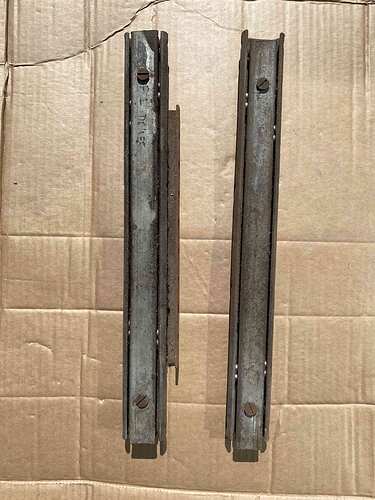 Yes, looks like plain zinc plating, no passivates, which would explain the propensity to rust. Those look to be still factory - thanks Eric, that’s good enough for me. Zinc plate it is, but probably with a clear passivate to help keep the rust at bay.

My money is on Cadmium Plating for something like this in the 1950s - zinc plating came later when there was starting to be concerns about environmental and toxicity issues with Cad, but as a protective coating, Zinc is inferior to Cadmium.

You may be right, Roger, although most of the cad seat runners I have encountered have been gold cad, not silver. I would have expected cad to last better over the years too, but again these parts are so old now that all bets are off - and you’re quite correct, Cadmium was the industry norm. I suppose it’s academic anyway, as nowadays the option is zinc or nothing. I think bright zinc with a clear (blue) passivate will be pretty close to a silver cad finish.

Hi Roger,
A couple of us were restoring 120’s a few years ago and we surmised the seat runners were cadmium plated. We disassembled them and had the runners cad plated by a local plater who offers rack and barrel cad plating. The US military and aerospace industries still specify cadmium plating and it is quite commonly offered in the USA. The end result was excellent. You might consider sending your parts to a US vendor.

Thanks for the tip, Tom. I think the expense and risk of loss would make that less of an option - and having seen both silver cadmium plate and bright zinc plate with clear passivate side by side, the difference is very minor and probably more technique than material sensitive.

Mine are cad plated, and made by Hallam, Sleigh and Cheston of Birmingham.

I covered my packing strips in black leather, came out fine, matches my gearbox dipstick hole cover. The seat runners were full of carpet fuzz, needed a good cleaning, so these packings should help keep that down. I screwed them to a pallet so I could run them back and forth while spraying with the cleaner; the eye bolt is a handle. [IMG_20200526_151021957] Nice to have seats that move easily now. I noticed the seat runners are stamped: Manufactured by Hallam, Sleigh & Cheston Birmingh…

In Australia, in Concours circles bright zinc plating is an acceptable alternative to the original silver Cadmium (standard, not passivated). But our top restorations and indeed self-satisfaction owners do get things Cadmium Plated if original. Throughout Australia Cadmium Plating was essentially outlawed/priced out of existence because of environmental laws, more so than any toxicity concerns, however given Cadmium Plating is clearly known/acknowledged as being superior type of protective coating, there are special exemptions for Military, Aircraft and indeed Mining Industries where quality is paramount. Net result is there are a number of local platers that still offer Cadmium Plating, even if for a non-exempted automotive part…, and quite happy to receive and send parts through the mail, albeit I always prefer/like personal drop off/pick-up.

And I am aware that you can still get Cad plating done in USA, but no idea about NZ, Canada, UK or Europe.
In a Jaguar context, all Cad plating was the normal ‘standard silver’ Cad plating up until about 1972/3 when they introduced Passivated Cadmium Plating that has the yellow look rather than silver.
It is pretty consistent demarcation established when looking at V12 E-type (1971-1975) under bonnet originality, albeit that’s not to say there may have been instances of Passivated Cadmium being used on purchased in components from outside manufacturers/suppliers slightly pre-dating that, but I seriously doubt any passivated Cadmium used in 1950s and 1960s Jaguars.
But be aware, any spare parts made/purchased after 1970s, even if an XK spare part, may well have then been made with passivated cadmium, even if original part was silver cadmium…

XK Seat Runners … do what suits you

Mine have some plating remaining. 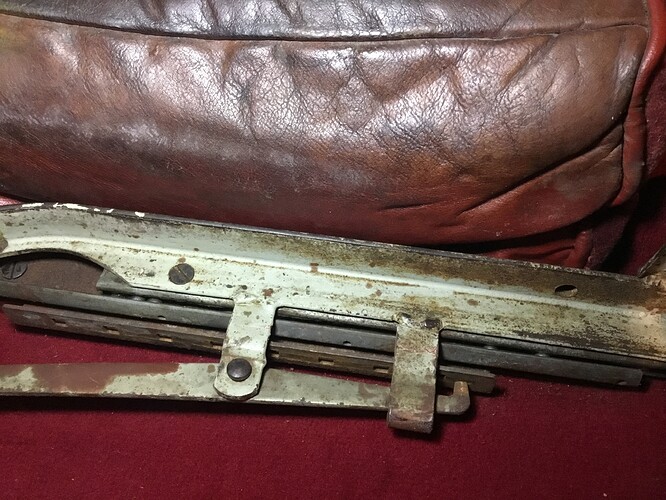 Here is a picture of a batch that three of us collectively had cad plated in one batch for around $150. We bead blasted the parts to clean metal with absolutely no rust. Note the box of P-clips on the right. We are now putting together another batch to have done. There is strength in numbers! 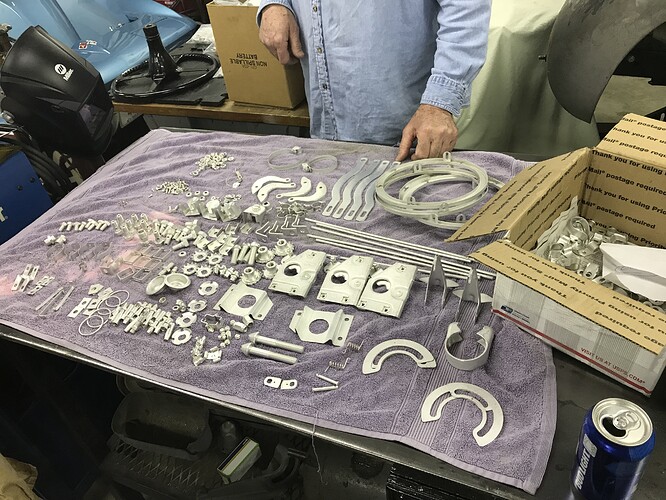 These parts are quite visible, dammit - I think I’ll have to send them over the pond to get them done. I could even send my original Cobra seat runners over with them - they need redoing too. It’s a bit of a worry as these parts are rare now, especially the Cobra ones, and the potential for them getting lost could be high.
Anyhow, I’ve found a website for Muncie Imports&Classics in Indiana, which states that they can plate Cadmium. They seem to be Jag people, too - anybody know anything about them?

There are semi-circular parts with slots in them near the summer coolant can. I haven’t yet seen them in my OTS pile o’parts. What are they?

Fan balancers. They get painted black but one of the guys threw them in for cad.

Thanks. Don’t have any. If they weren’t needed to balance the fan I’d assume they wouldn’t mount them…?

True. Their purpose is noble, I question their need and how effective they really are. There is a procedure in the shop manual on how to balance the fan with a special mandrel and a pair of level knife edges. Our group, lead by Steve Turschmann, actually went through the exercise to do that, and mark the position of the balancers. If your fan has a 1/16" (or so) hole on the mounting bolt circle then it had balancers.

I’ve never seen a 6 blade fan that didn’t have/need them. There will be two very tiny holes in your fan and the original balancers would have had corresponding holes for balanced alignment.
Yours being missing, you can duplicate this process on a cone wheel balancer.