I believe the below picture is correct. I just want to verify the relative locations of the F+ and F- terminals. As I show I think the FR+ is the top spade terminal in the plastic surround on the back of the alternator. So, is my picture correct? 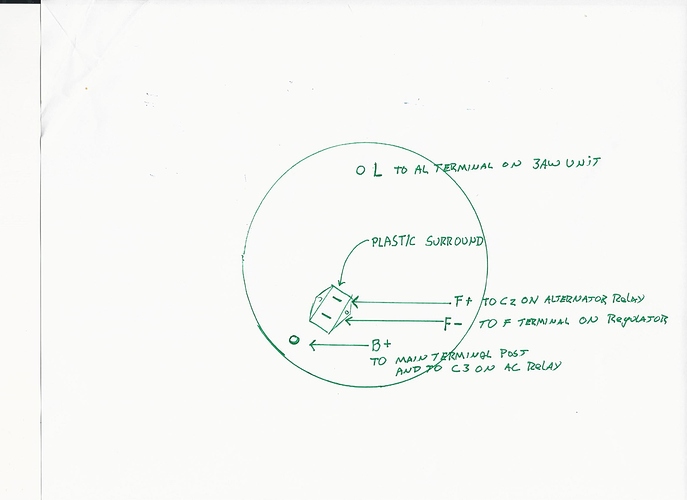 Google " jaguar xke alternator explained". You will come upon a site www.coolcatcorp.com/faqs/Lucasalternators.html
You will find everything explained there. When you go to the site…go to the bottom so you can go to page 2 and you will see your diagram.
Yeepee… I tried the link and it worked.

I think B goes to C1 on relay and battery. F+ is right…F- is right…and L is right. Just check the diagram I linked you to for verification of B.
There is another site… www.rootesparts.com/id230.htm The site is about convertin11ac lucas alternator. If you follow one of the diagrams where it states to connect the L to the F+ you will see that the F+ is the terminal closest to the center bearing. So your diagram looks right, It is the last alternator picture on that page.
Abe

Now I see…not sure about F which is which

Now to figure out why it doesn’t charge. Looking at old posts by Mike Frank I see that when everything is hooked up and running I should get 12V at the F+ terminal that voltage coming from the relay. I guess I’ll start there.

Good to follow the markings but as I recall it doesn’t really matter which way you connect them.