I’m a great follower of Carroll Smith - his book Tune To Win is the pre ground effects racer’s bible.

He, Fred Puhn, and Paul Van Valkenburg: I still have all those books.

You can add additional castor by using different numbers of shims on the front and rear brackets.

Huh? You mean camber? Castor is set with the threaded upper spindle (although mine are eccentric and alter both parameters)

Stock castor settings I believe are 2.5 degrees, and are readily adjustable via the threaded upper fulcrum shaft. I run mine at 4 degrees and prefer the resultant steering feel.

Hi Pete - no I mean castor. Many (most?) US cars set castor this way. The effect of differential shims back and front is to rotate the top ball joint forward or backward. I’m not suggesting anyone use this method but Clive was wondering about alternative means that would work.

Yes, I’m just looking at ways to change areas that I or others with more XKE experience think interesting. Sadly I have no practical experience with this car although I spent my working life doing similar work on others. My comments are purely theoretical, I can’t vouch for their practicality because I don’t have a car in front of me. (The project car I’m working is more than 4,000 miles away). I don’t have enough detailed data to monitor such areas as clearances, ball joint angles etc., so implementation is the responsibility of the implementor. It’s very possible that nothing I suggest has any immediate value but I enjoy the discussion. (That pig and mud saying comes to mind). Thanks for your indulgence.

Wrestling with a pig. That’s the metaphor I was looking for.
Would anyone care to make tyre recommendations? We’re not looking to go as extreme as some of the other areas of the car, initially thinking of 15 inch, 205 and / or 225 section, focussed more on high performance road use than track at this stage. Expecting to be somewhat lower than original, but not hugely so.
Any thoughts appreciated.

The best are Avon CR6ZZ - they come in 15" with various widths: They are amazing - a race tire for use on the road. I’ve driven on them and raced against them. Expensive but not compared to what you guys are spending.

Thanks Terry, what size did you use? We’ll probably start with a strong road tyre on 15 inch wheels, then move in a track direction after we’ve done some sorting and fixed the inevitable problems. Looking to go slightly lower radius than original on the first tyres, such as 205/55-15. Does anyone know if 225/50-15 will have any clearance problems on the front? (We’ve done some slight easing on the rear body to give clearance for 225 or 235 back there).
Spending? I’m just a simple engineer, I know nothing of such matters although I am trying to find some justification to buy a damper dyno. I’m just not sure there are enough hot Honda Civics on the island to help fund it. The Quantum dampers should arrive next week, looking forward to splashing some oil around the bench. And the floor. Maybe the walls if I get too confident.

I’ve never owned a set, but I’ve got friends that I autocross with who have. They will give you 2.5 to 3 seconds in a 40 second autocross course. I generally advise people to pick the size that gives you the same diameter as a stock 185-15 and in a width that will fit inside the rear well. With the bump stops removed and the right wheel offset you can use a tire width of up to 9.25" . The wider tires can rub on the inside front of the front fenders. I’ve never experienced any issues with that - slightly smaller turning radius only.

Our project car, a sketch of the rear structure as it’s going together. Blue is the new stuff, adding stiffness, safety and about 35kg. That’s offset by about 38kg saved in the rear suspension and differential. Only new structure is detailed, eg the new diff mount rails tie in to original structure below the floor.
The front detail is not representative of the final design, it needs to be tidied and updated when our analyst returns from sickness or when my CAD sills progress a couple of levels. More likely the former.This view makes the tunnel look three feet wide, it isn’t really. 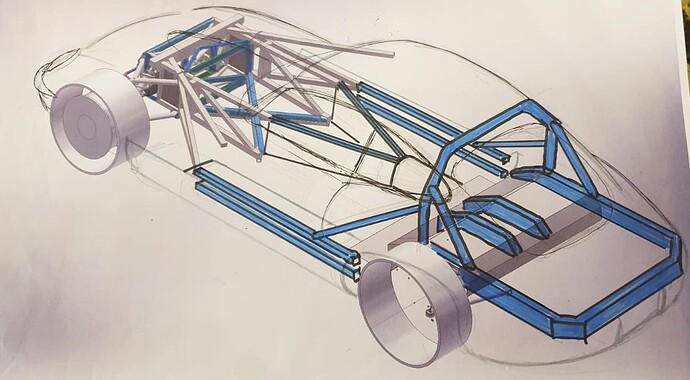 soooo looking at this topic, the number of comments, the expertise and experience of quite a few…who would tackle the task of a “white paper” on setting up E Type Camber–road, autocross-track–with the related topics, so it is edited, peer reviewed and in one place?
Nick

I’ll be happy to write a summary after we’ve demonstrated that our project car achieves its goals. Until then, I’ve probably contributed all I’m able - I have no practical experience of E-types, just a lot of simulations, calculations and words. The work we’ve undertaken for our project car is extensive because there are so many areas that need to be addressed to bring the chassis structure and systems to a level consistent with the visual promise of this wonderful car. I say that with full respect to the car’s creators, and certainty that they would have been delighted to use the tools and techniques available to us today. (With none of their timing and budget constraints). I’ll spare you repetition of the detail, I’m always happy to discuss and justify my views. The proof of the car will be in the driving - Utah, towards the end of the year unless anything changes. For sure. Maybe.
Best to all.

As in, the car will be built there?

As in, the car will be built there?

If only it were that simple Paul…

It will be largely built in Brisbane but my partner in crime (as he is not so affectionately known in some more traditional forums) will move to Utah at the end of the year. The car will be shipped in whatever condition we have achieved by then, for completion in the US.

Also in that shipment will be the basis of a TR project, another story altogether.

my partner in crime … will move to Utah at the end of the year.

Well, given the fact that Utah is closer than Brissy, tell him to contact me when he gets established there and I’ll be his first American friend!

He will certainly do that, thanks

I had a look at what can be done with the upper control arm alone, not wanting to get involved with changes to the torsion / bendy bars down below. My starting point was that the upper control arm inner pivots have been dropped in line with previous discussions, and steering joint height adjusted to recover the bump steer. Then moving the UCA back 15mm raises castor to about 5 degrees, which sounds better than the standard 2 degrees to me. If, while you’re doing this probably complex task, you drop the UCA rear mount about 15mm, you get a modest amount of anti-dive. I have some doubts whether the E-type actually needs anti-dive, with its long wheelbase and relatively low cg, others could comment better, however.…tilting the UCA in that way should give a ride comfort gain as the wheel now moves back slightly as it rises. Even a small amount of this recession can make a significant difference to quality feel and comfort, giving some cushion and reducing harshness on small bumps. It also keeps the upper ball joint angle similar to the original, reducing the risk of angularity problems after tilting the upright back for more castor. (Do check the lower ball joint though). It also changes the bump steer you carefully set after lowering the UCA pickups, so you get to do that again.
I’m not a fan of large amounts of anti-dive as used on some SUVs because it can affect other properties. I don’t think the small amount I’m suggesting here will have such a concern, but frankly won’t know until we drive it. We’ll be trying it on our project car but without that “clean sheet” opportunity I wouldn’t tear up the suspension just to put anti-dive in, I’d work with the damping instead.
I have dimensions relating to the above if anyone wants to try it. So easy to widen the scope a little further, then a bit more, and there you are doing it all new. Ask me how I know.