OK , as you can tell from the attached picture I am far from
creative when it comes to routing of spark plug wires back
to the distributor cap. I can’t help but 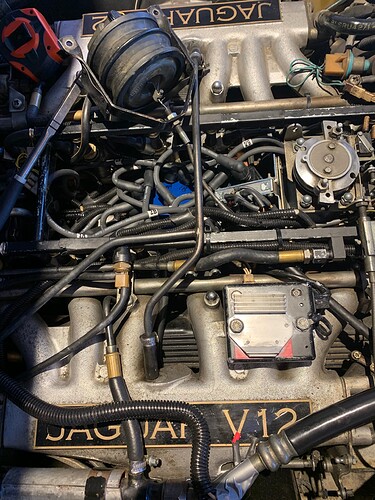 think it still looks like
a rats nest of wires at the cap. I found a diagram of a
Marrelli ignition system but not the Lucas.
I was curious if anyone knows the routing of spark plug
wires when then left the factory. Probably a lot more
Organized than my attempt.

I had similar problem. What I did was buy two sets of wires, so that I had plenty of longer ones. Then I was able to attach to distributor like this: 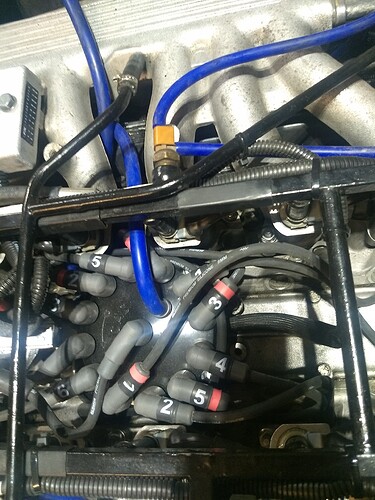 It sure seems to tidy it up a lot at the distributor cap.
Probably gives you a lot length to work around obstacles
and keep the wiring further down in the valley.

Yep, I struggled so many times trying to cleanly hook up the wires, but they’d still criss cross all over. I found ACDelco 8mm wires that were excellent quality for $50, so i bought a second set. No regrets.

As a positive note though, I replaced the plug wires, the
Rotor (not as nice or heavy as the Lucas one), replaced
the ignition coil with the single one set-up , sorted out my
Idle with the AAV and low and behold I believe my idle
stumble has gone away. I’m going to have to do the stand
up a coin on edge test while idling again!

I’ve never achieved the so called balancing a coin with my 88 Lucas, i think that’s more from the pre HE era and Marellis. I’ve done everything to get the smoothest idle i can, could be because i have a super enhanced ECU? Maybe it runs a bit different at idle. Although the mid 80s Lucas HEs are known to not idle perfect, i think its in the Book.

Maybe it runs a bit different at idle. Although the mid 80s Lucas HEs are known to not idle perfect, i think its in the Book.

I managed to do it once when someone asked me
(Just to show off) but then I changed the spark plugs,
haven’t been able to do it since. Go figure.

I always wonder if that very narrow gap affects idle. We do it for high RPM, but wouldn’t we get a better spark at idle with a wider gap? I was thinking of trying a wider gap to test out, but it’s SO much work and it could mess up high RPM.

Perhaps your older spark plugs were worn enough to give a slightly larger gap?

If it’s a choice of one or the other, I’d rather safely have a narrow gap for high RPMs.

What gap setting are you at now? I’m at .25 but I recently
Read a post from Kirby where he suggested .24 and there
also was a lessor one .23 maybe

I’m not an expert here but what effect do you figure increasing
or decreasing the gap size (for that matter) would have on
an engine both performance wise or even at idle.
Just curios, inquiring minds need to know but at the end
of the day they seem like important numbers.

At this point, I’m not sure if it’s the coil or the distributor having a difficult time delivering that many per second if there were large spark plug gaps.

I’ve never achieved the so called balancing a coin with my 88 Lucas,

Me neither, but my engine’s idle is perfect after a long highway drive.

Could it be fuel injectors which are not equally injecting fuel?

I recently watched a video of a fuel injector testing equipment and saw that he was testing testing 6 injectors at a time (maximum capacity of the tester was 6 injectors) and there was quite a bit of difference in the output of some of the injectors.

He had some old injectors, so he tested 30 injectors, identifying the injectors with similar the output over for whatever time he set the test for. He found 12 which were quite close to each other in output 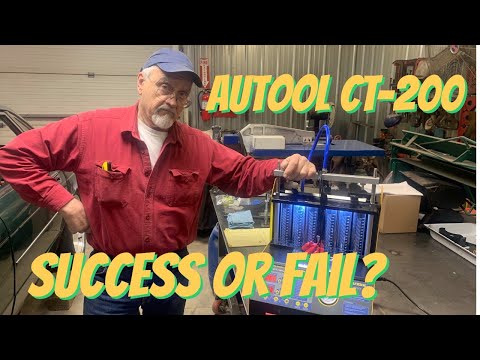 Some were way off in output. That would account for a rough idle as uneven firing would be most noticeable at idle with one or more injectors not putting out much output.

Just some food for thought.

My opinion is to buy the best spark plug wires that you can find/afford.
So many issues in my past when most cars had spark plug wires.
Now, newer spark/ignition systems, it’s not such a problem anymore.
I would just buy whatever was on the shelf. Then within a few months, I had lousy running engine from misfire, etc . Not much info back then, unlike now, on how test the wires.