I’m installing a new cable and angle drive on my series II roadster. My question: should there be an O ring or washer at either or both connections? The old parts had none but it does look to have leaked some gear oil. I don’t want to get back in here anytime soon.

There are no O-rings used on either side of the right angle Drive. There should be an oil seal on the transmission drive gear fitting or whatever it’s called to keep oil from coming out and getting into the right angle drive.

Don’t know if you’ve seen my Speedometer Bounce posting but the Original Drives are rebuildable and said to be superior the the new ones. Also at $70 much less money.

I 2nd Bill, There should be no oil coming out of the trans into the Right Angle drive.

OK, I see that in the exploded parts diagram. Is it possible to get to that seal and replace it from the open tunnel? or is that a job for when the engine/trans is out of the car?

Where / who is the rebuilder? Id like to see if they can rebuild the peculiar ones used in Rovers.

Rebuilder is West Valley Instruments in Reseda Calif. Near LA.
Morris is the owner.
He will do a full restoration of the instrument, to a fix it and leave cosmetics alone if the original patina is desired.

I have a series iii but it appears to be the same setup. The seal is in the end of the bearing sleeve. See picture. The entire sleeve with gear can be removed and that component has an o ring on it. It was difficult for me to access the bolt to remove. If you just need the seal you should have good access! 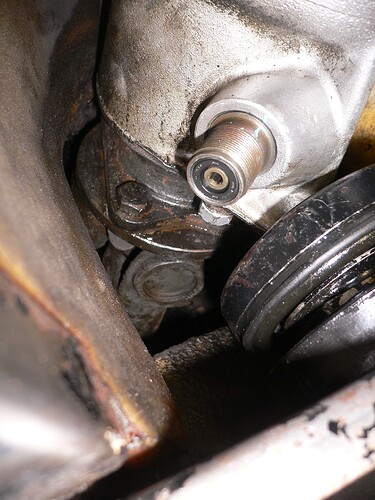