About 7 years ago I replaced the three steering bushes on the steering rack. They were the orange ones (Nolathane) and were crumbling. The car is not my everyday drive but get used regularly. I replace the Nolathane with the black (NBR Rubber, from memory). Recently I put her on the hoist and did a thorough check as I had 3000klm rally coming up. All looked good.
To get to the rally we had to drive through three states, two of which were flooded. Water filled potholes and washed away road surfaces hammered the cars even at reduced speeds. On a hair pin bend on the way up the mountain I experienced sudden and severe understeering for about the first 30deg of turning the steering wheel. When on the straight I noted that the steering wheel now sat in the 1.30 position rather than at 12 o’clock. This initially only happened in one direction but by the time I got off the mountain (lots of hair pin turns) it was in both directions. This only happened on tight corners and not on long sweeps and straights. After driving on the straight for a while the steering wheel recentered to 12 o’clock.
I jacked the car up to discover that the ends of the steering bushes (cotton reel ends) had disintegrated but the center of the bushes weren’t worn and still fitted snugly. I’m guessing that the potholes damaged the end of the bushes and allowed the steering rack to slide side to side. All other components were good.
I have now fitted the blue polyurethane bushes. They come with a washer (see pic) on both ends of the bush so that if there is movement of the bush it would limit damage to the ends. No problem with the steering now. 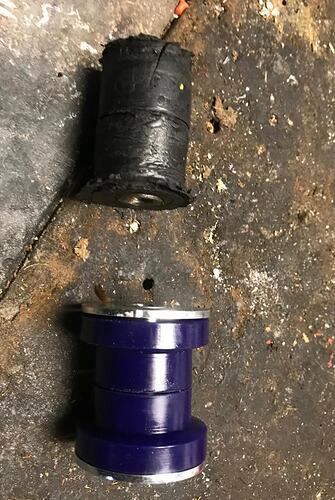 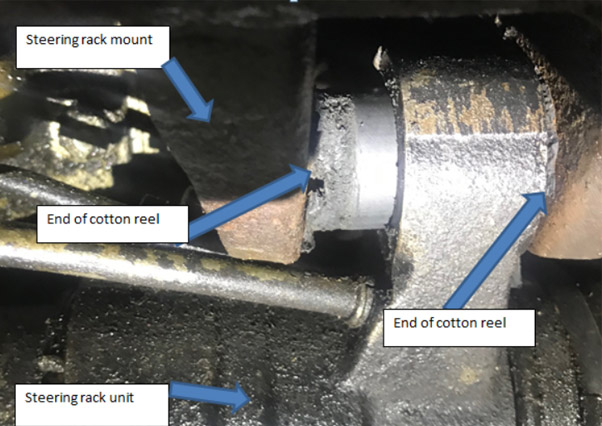