69 FHC My FHC was in an accident before I purchased her. The column is the type that has the metal collapsible mesh that did, in fact collapse at the time. It was never right when I was driving it and it was parked in 1980. The column is one of the remaining things that I need to correct. The bearings just don’t rotate smoothly and I am concerned about it’s safety! I have been unable to fine one. Does anyone know where I might get a new or rebuilt, etc. I would say that no one would accept mine as a core!

Have you completely disassembled it and inspected the bearing surfaces? Do you know anyone who has a lathe? Consider taking it to a small machine shop or possibly an automotive machine shop and have them have a look at it, they will at least tell you what they think.

Here’s a drawing that might help. I have no idea where you would get the bearings, etc. marked N.S.S. I would contact Welsh Jaguar in Ohio and see if they have a column around they could sell. They have a lot of used parts and parts cars. 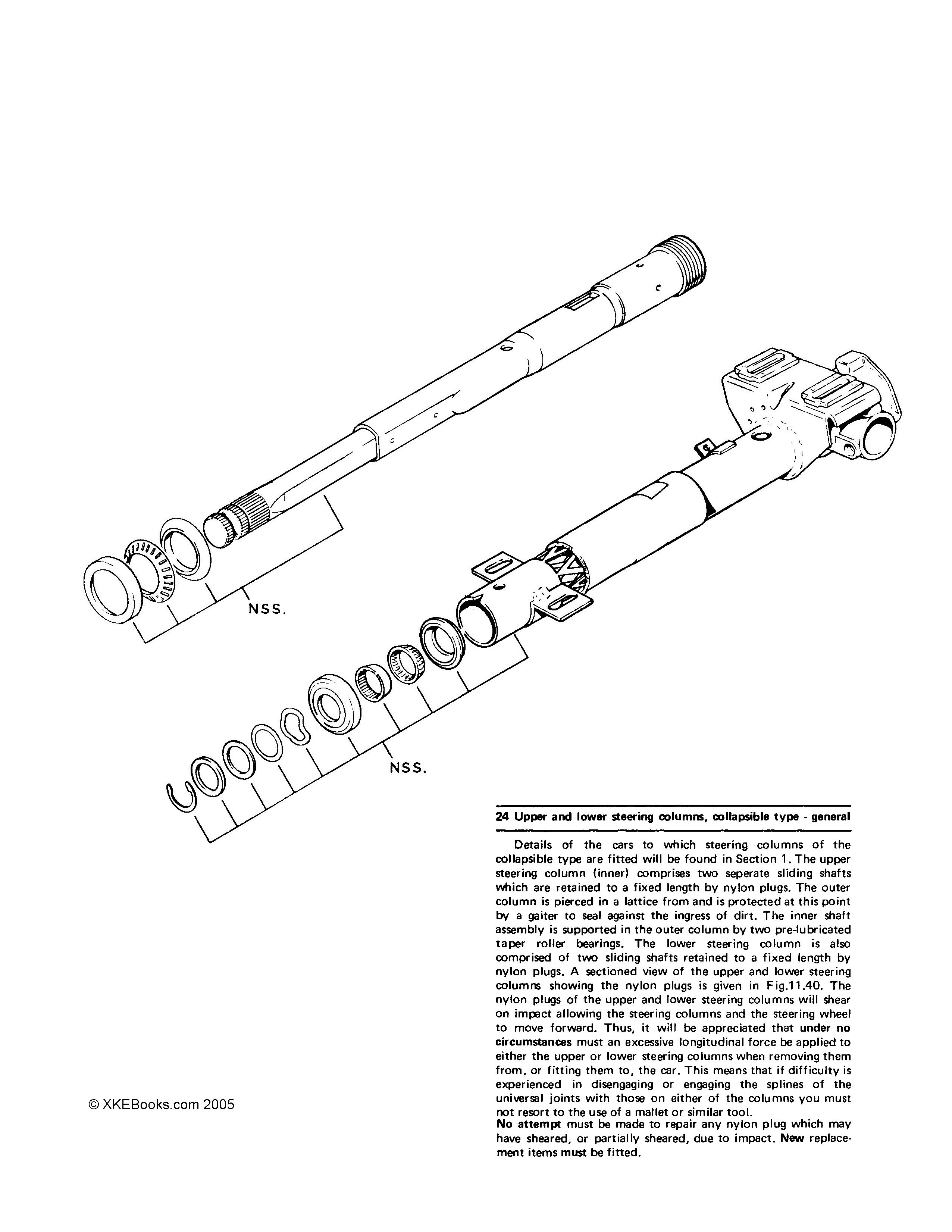 I repair the bearing system by replacing the Taper Roller Cone with an anti-friction material called Turcite. Turcite is used on the surfaces of solid slide-ways of machine tools. It has a great load carrying capacity and has a very low coefficient of friction. The Turcite is glued to the Cone component of the original bearing system (using the same glue used in the machine tool industry) and machined true when the glue has cured.

The collapsible body of the Steering Column can also be repaired by stretching it and at the same constricting the peaks of the collapsible form; I use a T-bolt clamp for this purpose. However, the important process is being able to stretch the whole system and end up with the opposite end where the Bearing Cups locate, fairly true and concentric; a reasonable machine shop should be able arrange a one off method. I’ve got a jig that the housing is placed in that allows the ends to be clamped on spigots that are concentric with each other and to stretch the collapsible area longitudinally whist controlling the length.

I have a used one I can look for in storage if you’re interested?

Bill, I am considering something like you describe; ie. re-doing everything! The collapsible cage was very screwed up and although it seems to have stretched back into proper form, distances etc, I still have to check that!. I am very familiar with the innards and how they go together. My actual symptoms are a definite “clunk” at 2 places in the steering wheel rotation. In observing everything, it initially appeared that it may be the NEW U joint area on the upper column since it and the 2 securing bolts came very very close to the dash just above it. I mean a matter of thousands of an inch! However, they do not actually touch.

( I disconnected the U joint and confirmed that it is not the shaft or steering rack at issue.)

Then, based on visual appearances, it seemed that the angle of the upper column was quite a bit off from the angle of the shaft going to the rack and that maybe I had installed the column improperly. The lower 2 attaching bolts go thru the column bracket and the bracket attaches directly to the under-dash area with no spacers, etc… However, the upper 2 attaching bolts (when disconnected) had 2 heavy washers (1/8") each and a spacer about 7/16" long that holds the upper portion of the column quite a bit beneath the main bracket that attaches to the dash area to accept the column. (if that’s clear!) When I look in the manuals, I don’t see those heavy spacers, etc. The result is a reasonably larger angle difference between the column and the lower shaft where they meet at the upper U joint. Obviously, the U Joint is designed for this difference, but not sure what the limitations are as to how an increased angle might effect the rotation??

Bottom line, I’m still not sure where the “clunks” are originating from but it’s not a internal column (small bearings etc) issue!

I would be interested in any photos that anyone has re: the column and it’s attachment to the under dash. All I have located are of the series 1 columns that are different from my series II column.

I appreciate the comments!!

Mark:
This is what my column looked like as I received it. I have no reason to believe that anything has been changed from the factory but I certainly can’t state that unequivocally. This is from an early series 1.5 car but it does have the collapsible steering column. 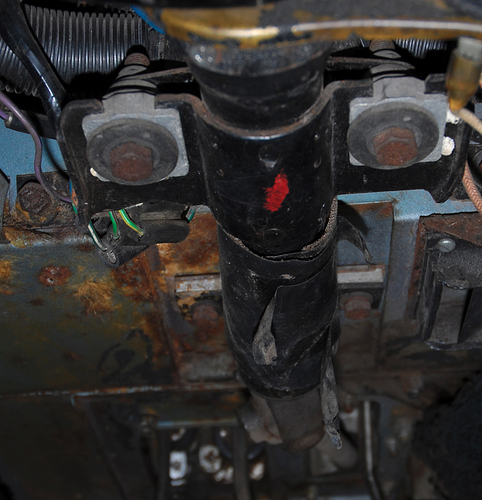 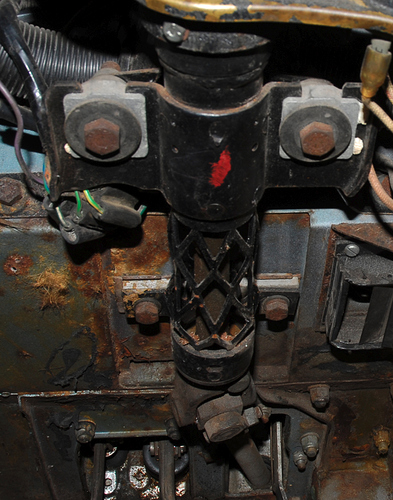 here are a few from my 69. the original black wrap that was in the cage has been removed. I got tired of it making noise when I turned the wheel. 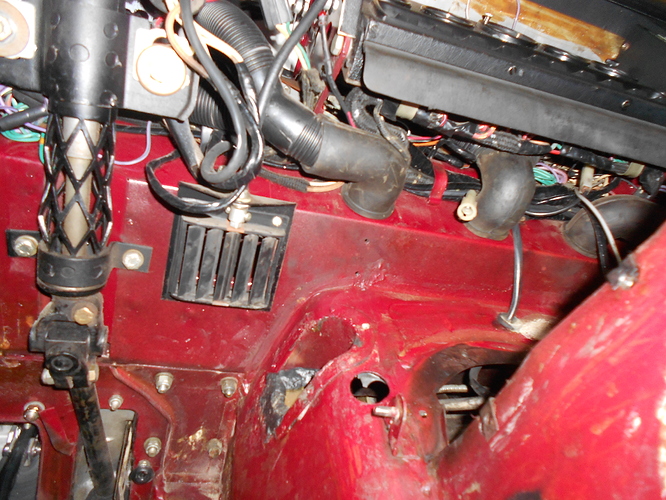 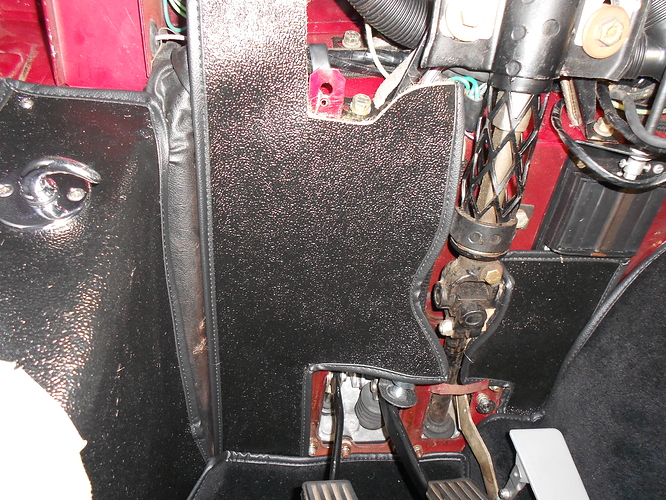 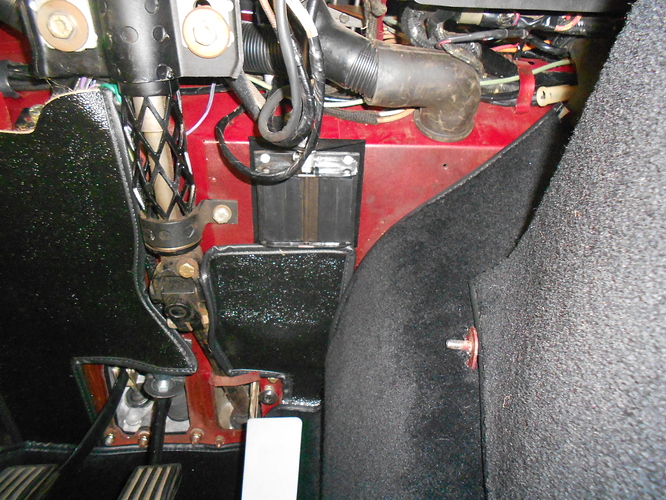 Exactly what I need! Doug’s forward 2 bolts appear to have a square spacer whereas Bob’s does not. Mine seems to be exactly like Bob’s.

Update - further observations and fiddling seem to point to some issue in the turn signal mechanism and associated hardware attachments. Going to remove it all and see how she turns without all that installed!

Very much appreciate the photos!!

My car is a 68 and it has exactly the same installation as yours. Mine has the spacer on the lower mount and also has the heavy spacers on the top two bolts. Yes, the upper column is offset from the lower column , looks weird but is correct. The clunking…if you don’t have said spacers then maybe the UJs are hitting the scuttle? Sounds like you’ve ruled out problems with the UJs and the rack so maybe the problem is in the upper column assy. It was on mine and itcwas due to play between the upper and lower what’s of the upper column assy. I took out that play by canabalising some feeler guages and gluing them into place.

No need to sugar coat it! Took the column in and out several times trying to identify the problem. Thought I had the issue resolved with re-aligning the column but then when I lowered the front end it was back!

To make a long story short, I removed the steering rack (without any need to remove anything else except the wheels) and took the rack apart; (having rebuilt it and set it on the shelf several years ago). Cleaned all the parts from the NEW grease to see if I could find any signs of binding etc. WHAT I DID FIND WAS I NEVER RE-INSTALLED THE LOWER BEARING ON THE PINION. Thus, when the wheels were off the ground and no real pressure applied to the rack it seemed smooth. As soon as the wheel were on the ground, the pinion was bouncing around as it went from tooth to tooth.

I’m an expert on the upper column and rack now! I guess not all was lost!

I appreciate everyone’s help and comments. Especially the photos. I save everything I ever come across to use as references in the future!

P.S. I have no idea where it might be so I simply ordered another one from XK a bit ago…

Great news Mark! Anyone here who claims they haven’t done something similar is a liar…