i think the factory recommended checking the oil level in the SU carbs weekly and topping up.
i find i need to refill an empty carb weekly if regularly driven.
what are others experiences?
tia
ed

Topping up might be your issue. Mine maintains a level of half inch below the top of the tube for quite a while. If you try and fill it higher it just gets displaced.

I agree, I wonder what the OP thinks is “empty”? I can’t even think how an SU would lose most/all of its oil. I check all my SUs periodically, but rarely have to top them up.

Does the OP’s car start to run poorly if not re-filled regularly?

I agree. The test I use is (a) unscrew the damper cap and withdraw it an inch or so (b) lower it back into the piston assembly © if you feel resistance just before the cap threads meet the top of the suction chamber you have enough oil. If you add any more oil than that (which will result in feeling resistance earlier), that oil will be expelled very quickly and serve no purpose. I confess that I rarely check mine (maybe once a year) prior to a big roadtrip, and can’t remember when I last had to add oil. If yours are really losing oil over a period of a week something isn’t right IMHO.

i will try the above suggestions.
see attached maintenace schedule

That sounds about right. So long as it isn’t overfilled it doesn’t really have anywhere to go. 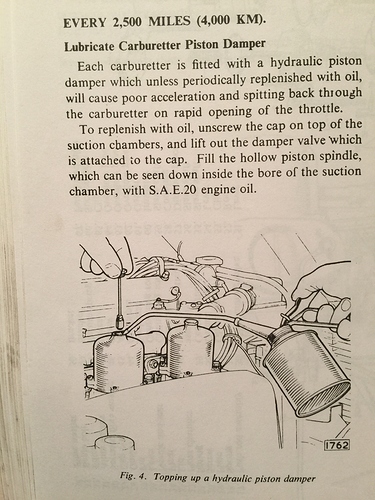 OK, it’s been a coupla decades since I’ve fiddled with SU carbs, but even I remember that “filling” those dampers is only going to cause the excess oil to ooze out the vent hole.

Here’s the proper way to fill them: Remove the air filters, reach in with a finger and push the slider all the way to the top. THEN fill it! As soon as you let it drop, the oil will disappear from view, but there’s enough oil in there to keep the damper itself immersed.

Better question is what to fill it with. I knew a guy who tried different fluids until he settled on something really light. Seemed to him that lighter oils yielded better throttle response.

S. A. E. 20 oil is hard to find. I use the one produced by the 3-IN-ONE company, SAE 20 weight. It comes in a small 3oz oil dropper can and is perfect for adding the correct oil level to the (two) Strombergs I have on the 1970 E-type. Just a few drops is all that is ever needed. When the engine runs a bit rough,
its the first thing I check.

who fills the dash pots with ATF?

That’s what I’m using though I always liked the 3-in-one concept because of the oil dropper can wingnut2 mentions. And I top mine every oil change, about 2000 miles.

Motorcycle fork oil in various weights is easy to come by…mix and match for best tuning.

Nope: it’s all I’ve ever used. Works a charm (in my climate).

Morning,
I’ve tried a variety of different petroleum based products, 20/50 motor oil, 15/50 motor oil (not so good), 3 in one oil, 20 wt shock oil and ATF. I’ve used the motor oils primarily because I always travel with the motor oil and it was convenient but I’ve recently changed back to ATF because I like the color

I recall reading one of John Twist’s articles (MG Guru of some renoun) who advocated using 90 wt gear oil to compensate for wear on the damper, I tried it and really didn’t notice any difference. Mentioned this once here and it was soundly poo-pooed.
Cheers,
LLynn

I understand that the reason many find they need to constantly refill the dashpots is there is an O-ring located in the assembly that requires replacing, at least there was on my Stroms…this came for C West and I stood there and watched them replace said O-ring.

at least there was on my Stroms…

I think this only applies to Strombergs, and even then only to ones fitted with adjustable needles which were not original equipment on the Series 1.5 or Series 2.

Last year I bought a pint of 20 wt fork oil at a local motorcycle shop. That’s a lifetime supply for a small fleet of E-types. The car performs well with that in the dashpots. Previously I’d used Marvel Mystery Oil until I found out it’s viscosity was only slightly higher than that of tap water.

I use two stroke oil. I don’t want my carb pistons to seize.

Does ATF vs 20wt really make any difference? I could never detect any.
I remember a guy from Toronto swearing his secret brand of sewing machine oil made his car a rocket.

No oil, will make the car backfire through the carbs, but performance differences???
I’m dubious. Anyone ever test? Like with a stop watch?

the piston slides upon throttle opening. thicker oil will slow the piston due to more resistance.

thicker oil will slow the piston due to more resistance.

The intent is similar to that of an accelerator pump. When the throttle is opened, the slide raises to maintain a constant depression across the venturi, meaning a steady draw through the fuel needle. But with the damper slowing the slide, it stays a bit closed for a fraction of a second, causing a dramatic increase in the depression at the venturi, in turn causing it to suck hard through the fuel needle and draw in a bit of extra fuel.

Hence, in theory adjusting the weight of the damper fluid should be akin to adjusting the accelerator pump linkage on a Holley. Really thick fluid should result in really strong enrichening, meaning you might get a brief puff of black smoke when you tromp it. Too light and the engine might cough a bit because it gets lean when you tromp it. Experience seems to indicate it’s hard to get too light, though; it has to be slap empty before you notice any degradation in performance.