Has anyone installed a T-5 kit from The Driven Man in an XK120 OTS, and if so, did you remove the engine ? On the TDM website, there is a video, and in it, the owner mentions that they have did an install on one 120 roadster without removing the engine by “loosening the mounts, and relocating the engine just enough to get in and grind the lip of the cross member”.

The TDM kit is very competitively priced, and comes recommended. I just want to know if I should be preparing to pull the engine at the same time. I know that is essential in FHCs & DHCs, but the wooden floor boards of the OTS, of course, extend all the way back to the battery box and I’ve pulled the tranny up through the cockpit several times without difficulty.
That video is at this link, and at the 4:00 minute marker is where it is discussed.

Thanks and say well, Knight

The steel floors of the FHC and DHC also come out, same number of bolts as the wood floors of the OTS.
I don’t like the idea of having to chop away part of the chassis to put one of these in a 120. Pictures of this in both the early and late style chassis would clarify.

Hi Rob, I don’t like that idea either, however the T-5 conversion, as far as I know, requires a slightly less aggressive modification. I am unclear whether the crossmember modification is necessary to physically put it in, or necessary for clearance at rest, or of course both. The images of the modifications for a Cosworth box, appear more extensive to me. Its great to hear from you and thanks, Knight

Do you know the cost of this kit?

I left the original crash 1st trans in the MGA and regret it.
I put a T-9 5 spd in the TC Special and love it.

I’m torn on the 120. If i wasn’t a matching numbers car… But, it would be nice to have OD for leveling off on the highway.

Mitchell, My car too is an all matching numbers car, (except for the head), so I plan to set the original transmission aside and always keep it with the car. Whats one more damned thing in the garage to trip over ?
One thing I like about this kit is that it doesn’t replace the original mount chassis bracket. In other kits, you’re meant to grind off the old mount bracket, and weld in a new, supplied, bracket, whereas this one has new mounts that utilize the factory chassis bracket. The crossmember modification is not severe, and in some cases may not even be necessary. I had TDM on the phone yesterday, and as the owner says in the video, they did one XK120 (his, in fact) without cutting the small notch, and boxing that in, on the crossmember. Consequently, unlike other kits, a refit of the original tranny would not require any welding or grinding; just swapping the rubber mounts out.
The cost of the kit is $4695, which includes shipping from Tn to NC, no tax outside of TN. I’ve discussed doing this for years, but put it off. When I lived in Florida, I wanted the 5th gear for highway driving mostly. Now living in the mountains, where nothing is flat, I mostly want the syncho first and better synchos all around. I’ve driven a 120 roadster with a T-5 fitted a few years ago, and it vastly improves drivability. In a couple of weeks I will be driving another.
I hope this helps,

PS - Since TDM has been mentioned so much on XK-Lovers, I was hoping that someone had installed their kit in a 120, through the cockpit and could tell me, for certain, if they had to remove the engine altogether, or simply jostle it forward temporarily as the owner of TDM say he did in that one case. Cheers, K

That isn’t much of a decision to be made. It’s half of what I’m spending on upholstery.

TDM says it’s a NEW gearbox. Does anyone know who makes it?

Mitchell, its a Tremac T-5.

Knight;
I pulled the G-Box out of my 120DHC a matter of months after I bought it in May 1967… I removed the seat bottoms, the G-Box Tunnel then “bent the tin” on the sides of the G-Box opening, THEN wrestled-out the Moss Box… Two words come to mind… “NEVER AGAIN!!” I’ll add, on “stabbing” the g-box, I actually “pushed” the engine forward enough that the “center” in the radiator fan actually poked a hole in the cooling tubes… So, I question, BIG TIME, that this 120 OTS installer loosened "…the mounts, and relocat(ed) the engine just enough to get in and grind the lip of the cross member”.
Of course, if I had a Service Manual, an XK120 DHC Parts Catalogue, etc. I might have learned to remove the seat frames, the wood “toe boards” and (full length) steel floor pans… It would have made the G-Box R&R a helluva lot easier.
Given you might need to “modify” the cross-member at the rear of the g-box, I’d pull engine and g-box to give yourself plenty of “mock-up” and working room… It’s a royal PITA to try to get “in between” items to cut-out, grind-out, etc. metal to “make it fit”… Been there, Done That… Didn’t EVEN get a tee shirt!!
Charles Ch #677556.

Good God, thank you Charles ! It has been at least a decade since we’ve corresponded ! Its great to hear from you. That is sage advise ! I hope you are well. Knight

PS - Charles, I’ve taken the factory transmission in & out, through the cockpit, a few times over the years, but my concern is whether the Tremac tranny from The Driven Man can be dropped in the same way as the factory box, without yanking the engine. I have to think that as many 120 OTSs there are with 5-speeds, someone on the List can answer that question,… unless just all of them were converted during restoration with either the body off, or engine out for rebuild anyway ?
Cheers, and thanks again.

Knight;
Good to hear from you, as well… I’ve “dropped-in” on various occasions, even posted a note a time or two, as well… mostly, I’m trying to “dedicate” ALL (most!) my spare time towards reassembling my 120… At this stage of the ownership of my 120DHC (Fifty-Four Years!!), and given the length of time I actually DROVE said 120DHC (Six Years!!) AND the most important “time” of all… at Seventy-Five Years of Age, I ain’t got a helluva lot of time left!! So, I NEED to finish the restoration/reassembly of my 120DHC and THEN start working on running-up ALL the Oil Companies profits by trying to use-up ALL of their 95+ Octane Gasoline!! (with these electric cars hitting the roads, we NEED to do something to help keep the “Awl Bidness” IN Business!! Right??)
Charles Ch #677556.

Whats interesting at this point,… as if anyone is still interested in this esoteric ramble,… I have literally spoken on the phone to everyone who offers any sort of 5-speed conversion, and not one has been able to tell me definitively whether or not their transmission, ( be it a Getrag, Cosworth, Supra, or T-5, TKO,…) can be fitted from the cockpit without removing the engine. Amazing ! I guess they just sell the stuff and haven’t a clue how easily, or difficult it can be fitted. :-)))
Cheers,

What am I missing here? Instead of a new gearbox upgrade, why not just change the ratio of the rear axle and speedometer more suitable to the type of driving you’d like to do? The parts catalog shows that it was an option back-in-the day. I understand pinions and crown wheels may be unavailable in certain ratios, but would it really cost that much to have them made in comparison to the final cost of a modern gearbox upgrade? Just curious. Personally I’m fine with my Moss 'boxes.

I just ordered the T-5 from Driven Mad. Matt sent 2 pics of the notch that’s needed in the cross member. That (white paint line) can certainly be cut from the inside of the car, just hang a cheek on the frame near the jack socket. I plan on stitching the wound, easy Mig job. Remember, at this spot it’s just a ledge about 3/4" deep. 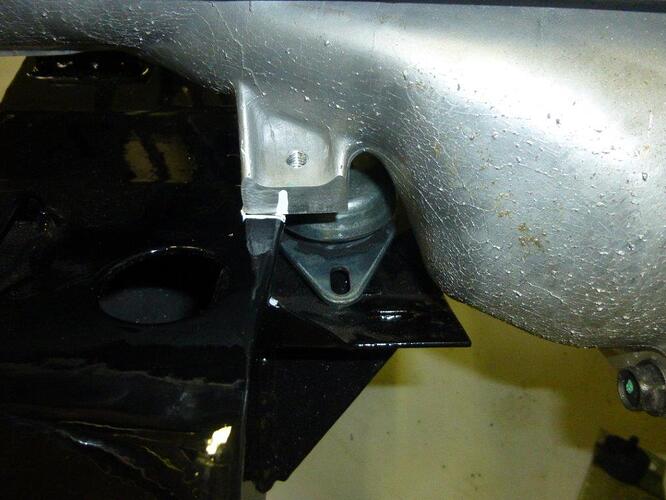 The difference between the 3 of them is like night and day. The TC is the easiest to upshift and downshift. It’s quiet.

I also had an MGTD and installed the high speed rear gear set. It’s no substitute for a gearbox with a syncro on 1st and modern engineering and OD on only one gear, I wish I had installed a 5 spd instead.

We shift A LOT in our cars and, lets face it, sometimes dealing with 1948 technology is a bit worrying, and tiresome… and slow.

I’ll just add to Mitchell’s last sentence that the glorious XK engine is 1948 technology, but the Moss gearbox is pre-war technology ! A gearbox was never specifically designed for the XK engine until the XK-E. To anyone questioning an all-syncho, 5-speed swap, drive one ! The true character, and abilities, of the XK engine come to life. Cheers,

I have to say, I quite like the old “Moss” box! It’s strong, takes a bit of concentration to operate it properly and sympathetically, and gives the authentic 1940s/50s driving experience. I am about to fit the optional 3.27 ENV diff, so the gearing will soon be better suited to motorway cruising.

I’m with you Chris. My old Series 2A Land Rover is from 1967, yet only has synchromesh between 3 and 4. The challenge of coming down through the 'box is incredibly satisfying when you get it right. I have gone to a lot of trouble to get my XK as close to original showroom spec. as possible, as I want to drive a new 1955 XK140 if I can. That’s why I bought it! I have a JLE CR gearbox for it, with overdrive. I’m sticking with the 3.54:1 rear axle ratio to make the motorways a little bit more comfortable.
You could fit a T5 to make the gearchange etc. more like a modern car. Then, to match, there’s probably room in there for a fuel-injected BMW straight six to give better pick-up, smoother acceleration and better economy… thin end of the wedge to me, but that is obviously a very personal opinion. Each to his, or her, own - the owner can do whatever they like.