Does any one have a hint as to why the taco cable on a mark V would continually break. I have had now 2 cables break off at the engine end. There does not seem to be any resistance from the taco as it moves freely with no resistance.
Any hints would be appreciated

Have you got a sharp bend, or an “S” curve in the engine bay?

Did you replace just the core, or the sheath as well?

I’ve seen speedometer drives break at the pickup end because they were unclamped and flopping about in use - these broke just past the ferrule on the head.

No sharp bends or S curve, it is a pretty much straight shot from engine (right angle gearbox between the carbs) to tach. You can see my cable above the water manifold. 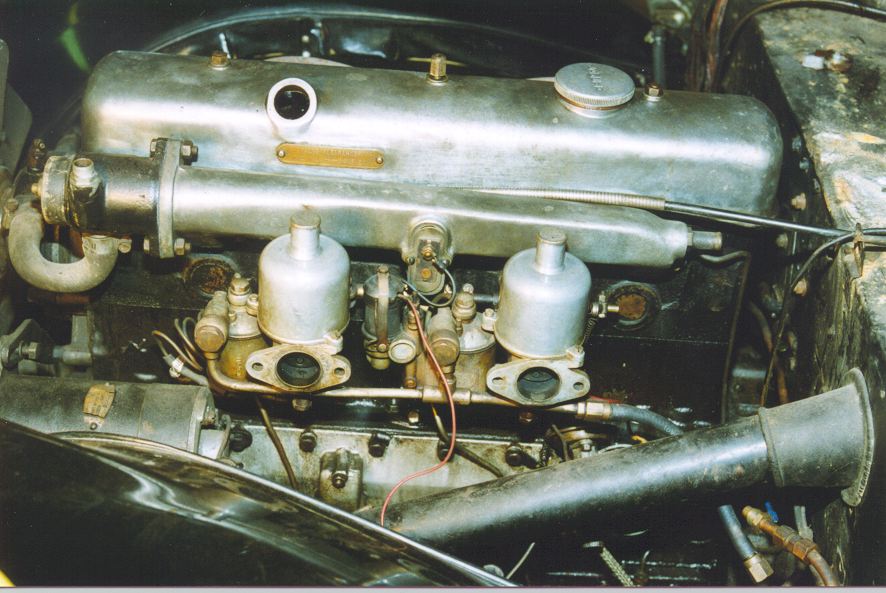 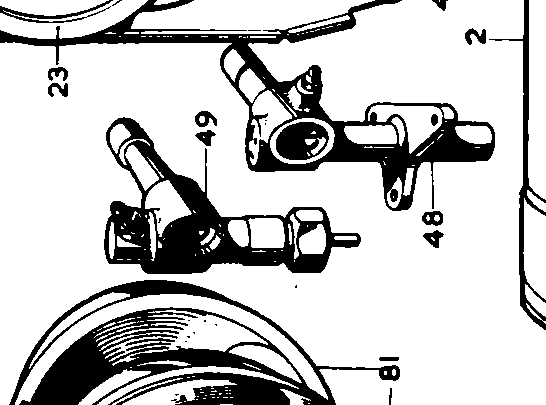 For Grant, I presume you have your tach on the left hand side, regardless of whether the car is LHD or RHD.
My first guess would be poor quality control at the source; they have a drive fitting crimped at the engine end.
Can you post a picture of the break?
Roger_McWilliams (Roger McWilliams) January 7, 2019, 6:46am #4

Hi Grant, one possibility for tach cable breakage near the engine is poor quality in a reproduction part. I had a repro tach cable come apart at the engine end on the Mark V also. The aluminum outer fitting on the end did not stay crimped to the cable outer sleeve. It could be pushed back together and work for a while before falling apart again. Finally replaced with an original off a parts car solved that problem.

Other possibilities for you to consider are things which make for too much friction in rotation inside the cable. This could be too long a cable causing high internal friction from too much bend, incorrect lube inside cable, kink in internal cable which makes it too hard to spin. Tach can be checked for low friction separate from cable, sounds like you have done that.

The length of the cable is 96cm and it was free inside the protective sheeth it come out next to the oil pressure gauge line and does make a very slight almost flat s bend to enter the engine drive. It enters this engine drive horizontally. Is there supposed to be a grease in the cable line? as I could only cover the rotating part in grease perhaps this is the issue. The cable has twisted off an broken at the connection to the drive ferrule.

Oops. There’s me getting my engines confused. That old picture was taken with the cable disconnected. The 2-1/2 has it above the water manifold, 3-1/2 below. 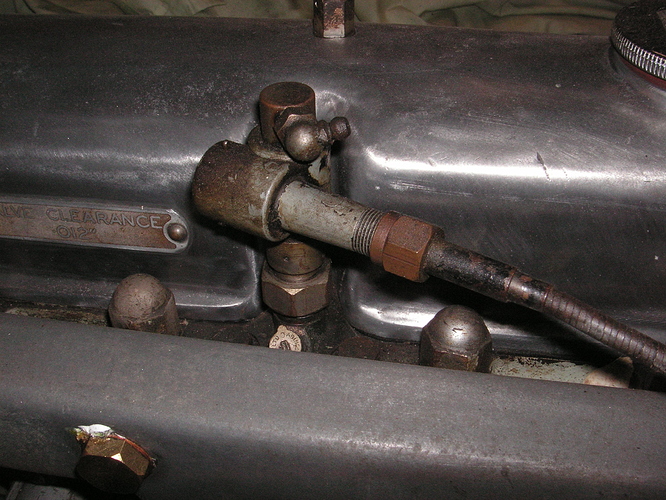 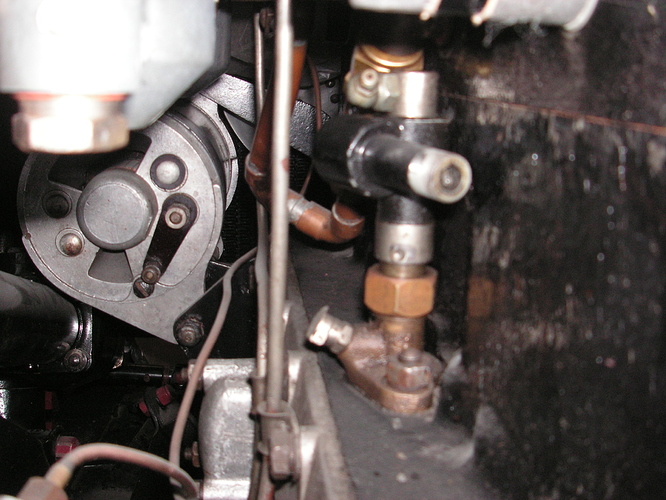 Anyway, I would see if I could re-crimp the end or solder it.
The right angle drive gears are greased.
Cables are not normally greased; they get a graphite oil solution which is probably hard to find anymore. Lock tumbler lubricant might work.

The speedo cable does take a small radius bend passing over the edge of the scuttle, so is another concern for a wear spot.

Can any one advise how long the inner cable should be, my thoughts are that it may have been too long which would tend to put pressure at the end and cause it to break over time??
thanks again
Grant

In handling mine, I was surprised to discover the spade tip on the engine end is not crimped or soldered to the long cable, it is loose and fell out.
The inner cable is squared on both ends.
There is a small ferrule crimped on the tach end of the inner cable, which prevents it pulling through to the engine end, and probably prevents it wandering too far into the tach.
The engine end fits into the square socket on the other end of the spade tip piece.
Now if yours is missing that little ferrule it might go too far into the tach and disconnect from the spade fitting?

If the inner cable istoo long it can damage the inside of the tacho.

Hello Rob, on the photo of the 2 1/2, what is the purpose of the screw in the side of the water manifold? Aftermarket thermometer?

On the 3 1/2 photo what is the copper plumbing (looks like 1/2" copper pipe and a fitting only partly shown) between the tach drive and the fan belt adjusting link?

When attaching the cable to the tacho the outer shouldn’t be forced up to the threaded section. If it needs forcing , the inner is too long and a small amount should be ground off until it doesn’t require force to thread the outer.

Hello Rob, on the photo of the 2 1/2, what is the purpose of the screw in the side of the water manifold? Aftermarket thermometer?

Thanks to every one I think that the major issue has been the right angle drive, it appears to have worked loose and broken internally which caused the fitting to become loose and probably was the major factor causing the cable to break at that end. Luckily I have a good spare which I will take to the instrument maker to check over when he makes the new inner
Cheers

on the photo of the 2 1/2, what is the purpose of the screw in the side of the water manifold? Aftermarket thermometer?

Rob’s car would not have been fitted with a heater. There was no provision for a heater in the SSs. The plug in the the water manifold is almost certainly closing off a hole drilled subsequently for a heater connection.

Peter guessed correctly; the brass plug in the SS was formerly a heater hose connection valve from the 1950s era Delaney Gallay heater.

The copper piping on the Mark V is my own experiment, a one-way 1/2 psi check valve on the starting carb pipe. A backfire through the starting carb can be disastrous, sprays gas all over. The factory put them on XK120 and Mark VII beginning about 1951.

Here are the ends of the tach cable, both ends pulled out so you can see them better. BTW don’t call it a taco; that’s a Mexican sandwich. 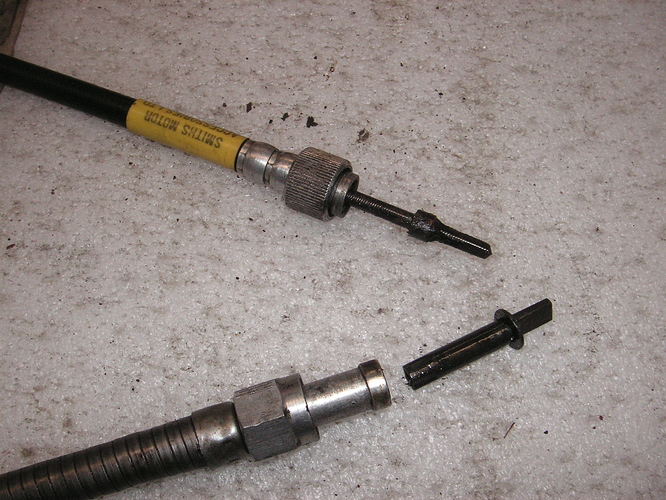 Here is a photo of the failed reproduction tach cable. 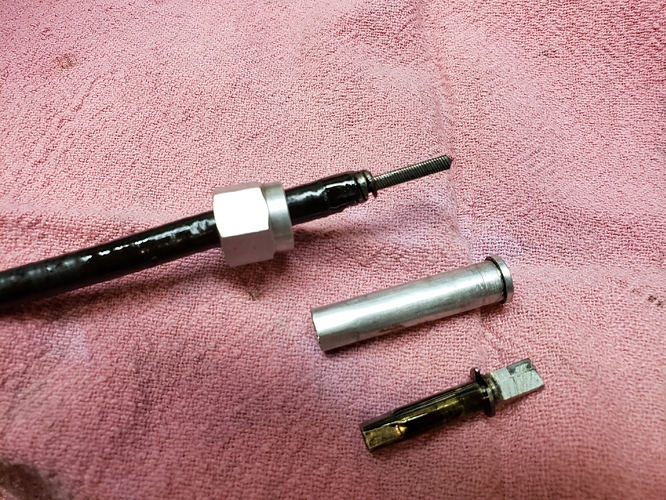 Looks to me like the reproducer forgot to crimp the end. You can see the crimping on mine adjacent to the yellow, but it is not on Roger’s photo. Is this what happened to Grant? 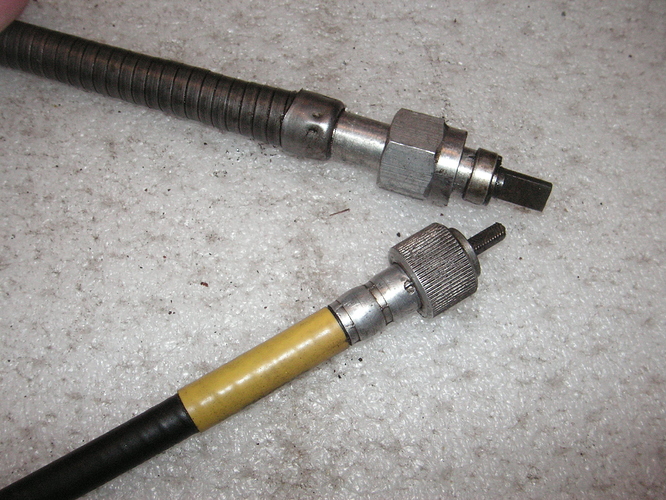 Brake hoses are another example where this is done.

On the engine end I have a larger diameter steel sheath over the rubber covered smaller outer sheath, probably to protect it from contact with the hot engine, with a separate little crimping sleeve about 3/8" long where both outer sheaths are joined to the short aluminum outer end tube.

I have my carbs off at the moment replacing seals. I have now had the chance to get a good inspection done on the rev counter adapter for my 3.5.

I have noticed that the top of mine seems to be broken and missing a cap with a grease nipple compared to your photos.

But more importantly, is your adapter flexible and does it swivel quite easily and freely?

On my adapter, the large brass nut immediately above the adapter bracket is locked solidly onto its thread with no movement. The round metal section above the nut (silver in your photo with a small round indentation) is also locked on solidly without movement.

However the main body of the adapter (painted black in your photo) with its right angled piece, swivels around quite loosely in any direction horizontally on mine. It is also loose vertically and although it only has a bit of give, can be rocked in either direction quite easily.

Does your main adapter body (painted black in your photo) sit in solidly without any play/give or is there a bit of movement? Be keen to compare. 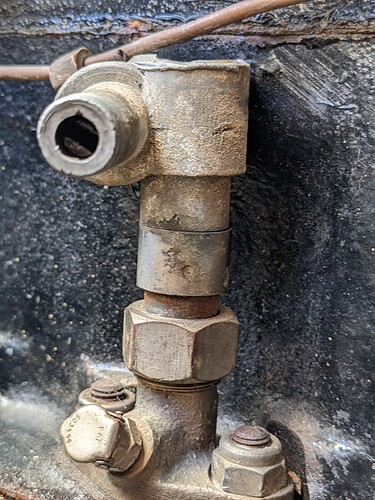 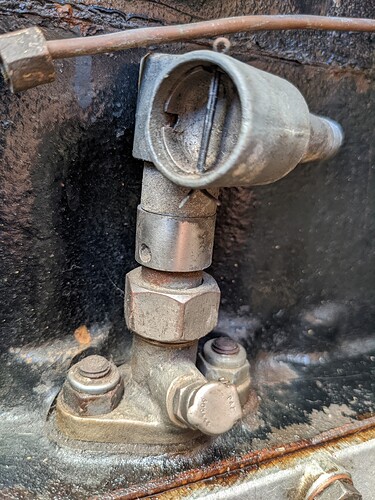 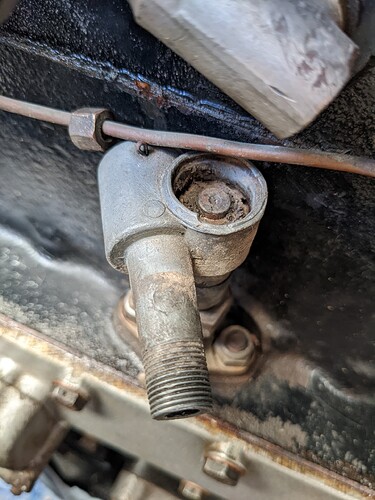 I have included some photos of mine for reference. You can see a small gap and separation between the round assembly above the nut (which is fixed solid) and the main body assembly directly above with right angle (which moves around including rocking vertically slightly).