The question no-one was asking

If it’s going to be a bonded in screen, I imagine they just modified the original.

“I’ll weld a 2mm thick curved strip onto the scuttle top surface with a 30mm bonding surface. Amazing how close a standard V12 screen is to fitting the roofline. I’m bonding the screen hence mods to A post - filling the A post gap with a part that is 8mm wide at the top and 22mm at the bottom of the A post. It’s outside surface will be flush with the bonded screen and door frames”

A flush-mounted windshield, alone and in any form, will be a strikingly handsome addition to the cars lines!

I think it will add some elegance (if such were possible)

Hi Danny, following is Peter’s answer to your question about our project:

“Clive and I have been mates since we were at Uni studying engineering while working for Triumph and Chrysler respectively. I decided that my career would best be served in mining and have lived on four continents, five countries and quite a few houses until I finally found time to make some interesting cars. I emphasise “make” rather than “rebuild”. First project car was to take 50kg of bent, broken and rusted crash remnants of a 1959 S1 Lotus 7 chassis from Rhodesia and create a chrome moly new build. That project came with a rare Coventry Climax FWB engine where a blow up 30 years earlier had ventilated the block. So new billet crank, rods, pistons and cams were made and a large part of the crankcase repair parts were fabricated. That car was sold to Mike Brotherwood who is the British S1 Lotus 7 guru.
Next project was to build a 100% new build all aluminium lightweight E type Roadster. Classic Jaguar in Sussex made a new all aluminium body, bonnet, chassis Monocoque and Crosthwaite and Gardiner supplied a brand new 3.8 all aluminium FIA spec engine to 1964 specs. It was assembled and painted by Concourse Sportscars in New South Wales. A lovely car, which I had dreamed of building for 30 years and became everything I wanted. It was a toolroom perfect car with sufficient original parts and identity to be an almost exact sister to the Briggs Cunningham lightweight le Mans E types. At 1050kg and 340 BHP, it was very quick, surprised a number of modern Loti, Ferraris and Porsches while having huge character. Track days were great and fast. One problem. It was too pretty and perfect to use! A stone chip would be more than annoying. So the next project took us in a different direction. Still an E type, an S1 coupe was chosen…and then cut to pieces to allow a very much stronger structure to be created, mostly invisible under the skin. Box section RHS side anti intrusion bars were created inside the sills (quadrupled the section modulus for an 8kg weight penalty), a roll hoop was added and triangulated forward to the now far stronger sills and rearward to the additional chassis rails at the rear, which safely protect the bag tank fuel safety cell. Having previously had a bad day with a fire after a chopper crash, I’ve become fussy about fuel safety cells! Next we carried out an FEA analysis of the front frame assembly and discovered that about 12kg of repositioned chrome moly aircraft tubing increases the torsional stiffness several fold. Bigger AP Racing brakes, a 6 speed Tremec gearbox and structural mods have been more than offset by the aluminium Jaguar AJ engine, Ali boot, bonnet, doors and ZF limited slip differential. The chassis will be put in a jig to ascertain final torsional stiffness values and is expected to come out 80kg lighter and 400% stiffer in torsion. 425 to 440 BHP is expected from the short stroke (84mm) large bore (99mm) modified Jaguar AJ engine. Flow bench testing has yielded 315 CFM but with the new 5 angle valve seats we’re hoping for a bit more. Why have we built this car? Very good question and please don’t tell my wife, but it’s as simple as this. We get far more satisfaction building this unusual car than going to a Porsche or Ferrari showroom. Both lovely cars of course. But in our engineering minds, not as satisfying as designing, engineering and building our own special car”. 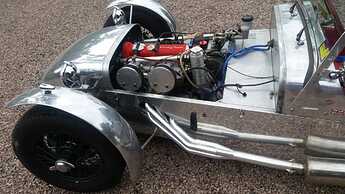 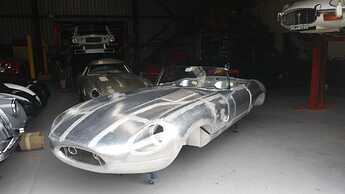 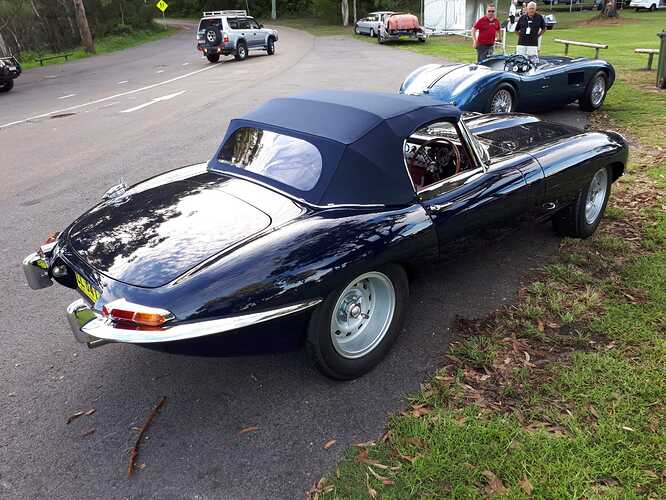 Peter thanks for the explanations …… so it’s the intellectual pursuit of happiness !

I get my jollies by trying to get everything as close to original as possible but with hidden upgrades or safety upgrades, I really enjoy the process….unfortunately I don’t have a engineering background. 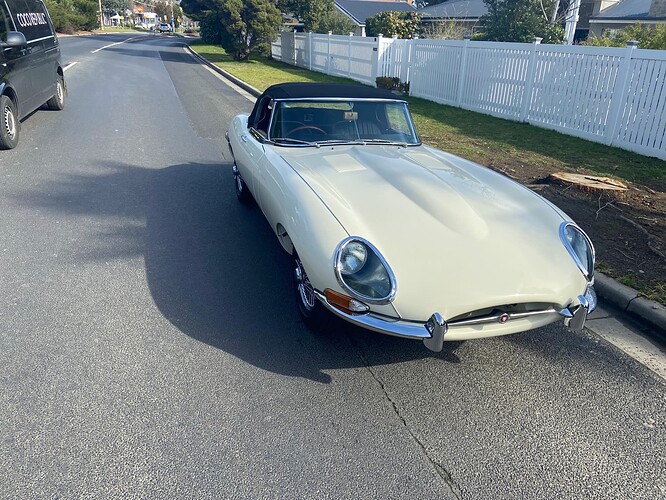 Peter thanks for the explanations …… so it’s the intellectual pursuit of happiness !

I get my jollies by trying to get everything as close to original as possible but with hidden upgrades or safety upgrades, I really enjoy the process….unfortunately I don’t have a engineering background.

I think of it as sanity retention, and feel very fortunate to have the opportunity to apply some of the stuff I’ve learnt towards a result that looks and feels worthwhile.

Nah I’m just an assembler and disassembler…… but I am good at it…… my background is a “masters in pen pushing”…… but I enjoy the challenges that restoration gives my brain…. Just for fun my eighty year old machinist mate and myself are converting our mills to cnc machines ….lots of challenges there!

Sharing a link to the section where Peter, the owner of the car described here, relates how he cast a cylinder block for an Aston Martin DB4 on a farm in Rhodesia. Good reading if you’re thinking it’s tough to keep an elderly car on the road

You have an interesting project. Casting an aluminium block is relatively challenging and hopefully if i could share my experience casting aluminium blocks in Rhodesia 40 years ago, my learning mistakes might help you. I cast an Aston DB4 replacement block on our farm. It was a process of trial and many errors but we eventually produced a couple of aluminium cylinder blocks that drove hundreds of thousands of km. We made wood patterns easily enough but we found out the hard way that the castin…

Well that didn’t work as I intended. I’m happy to say I have no idea how to work Facebook, the truly dedicated can find them at BDRGroundControl

Thanks Nick. I’ll be back there on Wednesday for more damper work. If it goes to plan we can think about winding up and shipping the parts to Utah, to meet up with the car late this year / early next.

I’m curious about tires on S1 and S2 cars. I understand the standard fit was 6.40R15 bias (cross) ply, with 185VR15 radial as an option - presumably extra cost?
As far as I know there wasn’t any difference in chassis specs (bushes, damper settings) between the tyres, so my question is which tyres was the tuning optimised for? I’ll be dubious about “both” as an answer - my experience is that tuning programs focus on one set up - typically the premium spec, or perhaps the high volume one - with periodic checks that the direction also suits the other variants.
I’m curious because I never worked with bias-ply tyres (cross ply tires? Trying to keep everyone happy here) so I don’t know what specific changes would be needed. I have some comments from an old colleague on the performance differences, I’ll find it and post here.

Generally speaking, the main difference in setup for radials is greater negative camber.

Or negative instead of positive.

Generally speaking, the main difference in setup for radials is greater negative camber

You’re good! My friendly tyre engineer turned vehicle dynamics guru says similarly, from a different perspective. Following are his comments, lightly edited for brevity. (Explanatory notes in italics are mine). My interest is that radial ply tyres took over quickly in Europe, I’ve never worked with bias ply tyres and was surprised to see them so widespread when I went to work in the US around 1990. My question concerned differences between bias and radial ply tyres, and the effect on chassis engineering.

Expert comment:
“I started at BFG just as they introduced their first radial tires, so I do remember some pros and cons.
The radials transmitted more road texture and small bump input to the cabin than bias tires. That was bothersome to some in the day.
They also had lower camber stiffness (less change in cornering force in response to change of camber angle) which had one pretty noticeable benefit. They reduced “nibbling” response. Nibbling was the steering wheel torque and lateral acceleration response of a vehicle to a pavement step up nearly parallel to the direction of travel. The bias ply tires nibbled at the step, rejected it for a bit, then jumped up with a bit of a lunge. Mostly a nuisance but a safety hazard with a big step up and a naive driver who tries to creep up the step.
Radials also have lower aligning torque stiffness than bias tires. (tend to give more toe change in response to cornering forces within the tyre)
The lower camber stiffness and aligning torque stiffness reduce total understeer. That increases steering sensitivity (steering wheel angle change with lateral acceleration) and reduces steering torque gradient (steering wheel torque change with lateral acceleration). This, of course will make a car have a slightly different steering feel. The XK-E will be more authentic on tires like it was designed for, but not necessarily better.”

The use of “understeer” in the previous paragraph does not refer to the condition around limit of adhesion where the front of the car loses traction before the rear - here it refers to the front / rear distribution of cornering effort at lower speeds, where a moderate level of understeer is generally agreed to be desirable.

That is a VERY good explanation of the major differences twixt bias ply and radial ply tires: my first set of radials were Semperits, on my P6 Rover, and I never looked back!

It took a surprisingly long period for folks to abandon bias tires: I stuck them on my race car trailer and EVERYONE warned me of the disaster that would happen.

With no exception, every vehicle I installed radials on, its overall handling improved, even McKeever The Wonder Bread van… 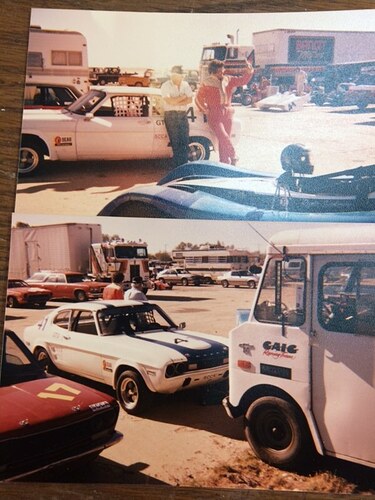 They also had lower camber stiffness (less change in cornering force in response to change of camber angle) which had one pretty noticeable benefit.

I drove (as I still do) a '63 Corvair with swing axles when radials first became readily available in the US. I talked the local Sears tire dealer into fitting a set of their radials (made by Michelin.) They didn’t want to sell them to me because they said the tires would be worth more than the car. They transformed the handling, in particular because I could run a lot of negative camber at the rear. As mentioned, optimal pressure is lower than bias ply; I remember everyone commenting that radials always looked like they were low on air.

I remember everyone commenting that radials always looked like they were low on air.

My wife still freaks out over what she thinks is the appearance of low pressure: fortunately, I’ve mostly reeducated her eye!

As mentioned, optimal pressure is lower than bias ply