Still trying to find a replacement “Y” hose for the air rail, given that mine has a split right at the “v” part of the Y and some other cracking. I had mentioned a place here that manufacturers replacement hoses (p.s., hydraulic, radiator, heater, etc.) as needed for shops which has been in business a long time and is pretty much THE go-to place in the City for that type of thing. I sent my tech bud over to them earlier today with the hose in hand, and the main guy there opined that yes, he could make a replacement hose, but “no” as to would he. He says that he would have to buy a new mold just to make it, and he wouldn’t be willing to do that for just one hose.

He suggested to my tech that he go to the local NAPA distribution center and look through their hose assortment in the back of the warehouse to see if he might find something there that would work.

NAPA turned out to have several “t” hoses, but no “Y” hoses. (damn Jag!

) None of the “t” hoses though, would work, as the hose diameters were not the same as ours.

Anyway, I’m wondering - what if I had my guy go back to the hose place in a few days and ask the man there that if we could guarantee sales of 10 hoses, would he then be willing to buy the mold and, if so, how much would the hoses be?

Anyone else on here think that is possible? Assuming the “price is right”, would you be interested in buying one of the hoses?

I wouldn’t be thrilled about a homebrew molded Y hose. I prefer the idea of using a metal Y connected up with three straight hoses and six clamps, even though it looks busy.

Better yet, rip that whole air pump system out and toss it. Local emissions inspections notwithstanding, of course.

In fact, Palmdude, I was mentioning that possibility to my tech bud yesterday, after all that frustration. Only three concerns I would have in doing that (1) someone mentioned earlier that if you do that, the check engine light will always be on b/c of a false O2 sensor code, IIRC (2) what to do with the air pump - apparently the same belt that turns it also turns the a.c. compressor, so you can’t remove the pump. So how do you reroute the system so that the air it is pumping out goes 24/7 to the “wrong side” of the air filter housing? and (3) plugging up the 12 little holes in the manifold. My thoughts on that are to find screws/bolts that are the same thread size/type and screw those into the holes instead. Or, done more easily, taking an epoxy putty like QuikSteel and plugging them up with dabs of it.

someone mentioned earlier that if you do that, the check engine light will always be on b/c of a false O2 sensor code

The air pump must be disabled when the engine warms up and moves to feedback mode, because pumping air into the exhaust tract will screw with the oxygen sensors. Those late models might have a test mode that looks for a change in oxygen sensing when the pump is switched off, but I doubt it. It’d be pretty easy to check: Just remove that fan belt and do without A/C for a while, see if any warning lights come on.

As far as the pump itself goes, yeah, you need a tensioner for the A/C compressor belt. There is a Euro style idler pulley for that purpose, or you can make one, or you can replace the air pump with a Delco alternator with a suitable pulley installed, or you can just gut the air pump so it serves as an idler.

I’ve been in touch with a guy making silicon hoses , who is able to make specific orders, but the cost rises very quickly, and the tooling costs need bigger series than 10 (or you’re about to pay 1000 for the hose)
so that matches your friend answer

or wrap some silicone tape around your current hose : it wont melt, and will only stick to the same material
something like :
https://www.ebay.com/b/Self-Fusing-Silicone-Tape/109475/bn_7023265943

(look for “emergency tape”, or “self fusing tape”

$14, on Amazon, for a brass wye: some hose a few clamps, problem solved!

I’ve been in touch with a guy making silicon hoses , who is able to make specific orders, but the cost rises very quickly, and the tooling costs need bigger series than 10 (or you’re about to pay 1000 for the hose)
so that matches your friend answer

or wrap some silicone tape around your current hose : it wont melt, and will only stick to the same material
something like :
https://www.ebay.com/b/Self-Fusing-Silicone-Tape/109475/bn_7023265943

(look for “emergency tape”, or “self fusing tape”

Yes, I forgot to mention in that post that the NAPA guy recommended using some kind of “self-fusing” tape … I had never heard of it before. My tech bud and I seem to think the best approach would be to use Flex Seal on the cracks first, and then wrap the hose with the self-fusing tape. Alternatively, I like Wiggler’s suggestion (do you have a link to the $14 piece you mention, btw, Wiggler?).

are we on the verge of overthinking this? It us just ambient air being pumped by the air pump. The 2 check valves after the y, if functioning, keep exhaust gases from going into the rubber y hose. I would think the tape wrap would be sufficient. I do not think it is like there is a pressure sensor measuring the secondary air. So tape and be done.
Or get a used y hose from a breaker.
My 2 cents . I don’t think you are going for concours, are you Paul?

No, just want something that WORKS, JimD. Hell, if I wanted Concours I wouldn’t have gone with a N.O.S. OEM one-way (gold/brass) valve and an aftermarket (black metal) one that is actually a GM app.

2 - Dump it overboard, and put a rubber plug into the hole in the filter housing.
3 - There are no threaded holes for the 12 “air pipes”, the air tubes are a"slip fit" into the holes with a couple of small “O” rings. Go to Kirbert’s book on how to plug the 12 air holes.

As you wish, kind barrister! 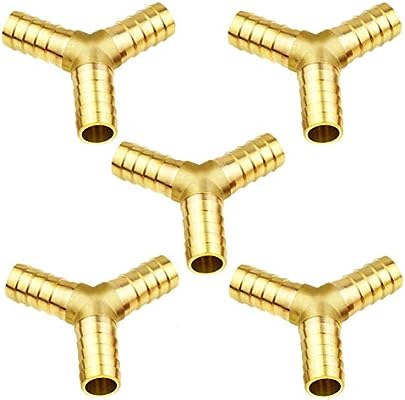 As you wish, kind barrister!

Thanks guys. I’m still thing about going with Lock’s suggestion.

I decided to pop the hood myself and see what is going on under there, now that my tech bud is apparently on some extended “break” somewhere. First thing I noticed in the system is that the hose coming out the back of the air pump has apparently rotted and fallen off (is that maybe the source of that constant, even whistling sound whenever engine is running?

). Here I assumed it was a vacuum leak. Also saw the two bolt heads on the passenger side thermostat cover that got twisted off by you-know-who. I don’t see any way in hell he is doing to get the rest of them out (absent drilling the remnants out), since only a slight “spindle” is still present where both of them were.

I’m tempted to just go with what was done re: the 3 or 4 valve cover bolts on Superblue that I discovered twisted off when I went to replace her valve cover gasket a couple of years ago - the offending party had just use shouldered nuts to fasten the cover down for same.

btw, whacked the backside of my head on that stupid “low” hood at the front when I was examining the thermos cover bolts. Which model and MY Honda struts are we supposed to substitute for the OEM ones again to gain additional “headroom” under there?

I was about ready to toss my new OEM ones anyway since they have started “creaking” already (and no, it’s NOT the hood hinges) … I guess that’s what I get for going with cheap aftermarket ones …

Well, to answer my own question, I finally tracked down the struts. What is odd is that I found no mention of hood struts in the Book, initially, but then when I went to check out an article in the 9 Lives CD the authors attribute their info on the subject to the Book. Go figure. (Kirby?)

Anyway, since the CD was compiled 17 years ago and presumably the article was even older than that, it appears the particular struts mentioned in the article are N.L.A… However, the current version for an '84 Honda Accord hatchback is Mighty Lift # C95038 or Sachs # SG226002, both had for around $22 apiece at AZ. What puzzles me though is that these struts, when fully extended, only do so less than 2 1/2" more than the Jaguar OEM struts (i.e. about 20" v 22"). That doesn’t seem to be a big improvement in work/head room. ? I was expecting them might extend at least a foot longer than the Jag struts.

Because of the leverage, that extension results in the hood opening quite a bit farther – far enough that you’d need to check that the grille doesn’t get damaged against the bumper. If you want to see exactly how far it will open, just disconnect your present struts and lift the hood until the attachment points for the struts are as far apart as the spec for those Honda struts. You can also check for possible grille damage while you’re at it.

First week I got my XJS (Oct 2018) I bought those Honda struts Kirby recommended. Hood only went up a tiny bit more than before, but I’ve never had issues with it getting in my way. ???

Maybe you got a smaller head than me, Gregmatic … ?