A small item that may be of interest to US and Canada cars. There are some Tung-Sol P241D Flasher units available on ebay at eBay item number:

I bought a lot sold as 4 units from that listing (with which I have no other affiliation) and it shows more are available. One of these has just replaced a failed unit in my Mark V, the replacement is working fine.

I had struggled a bit to find one of these some years back and switched to using Lucas units. The Tung-Sol units are listed in the Mark V Parts Catalogue as Part No. 241/D Flasher Unit for US and Canada cars.

From May 1952 onwards Jaguar started using the Tung-Sol P241D also for the XK 120. Interesting in this respect is Service Bulletin 112 of October 1952: “ Cars scheduled for export are fully wired for flashing indicators and have relay units fitted. Owing to shortage of supplies, Tung-Sol unit part number 241D is not included for certain countries, and it is the responsibility of the Distributor to ensure that unit is obtained locally and fitted prior to delivery” . So some of the US delivered XK 120s may even have a different Tung-Sol type.
From late 1953 onwards, Jaguar started using the Lucas FL3 (Lucas number 35003/A) which in fact was the same Tung-Sol P241D construction but now in a Lucas housing. The FL3 was used until 1957 when the FL5 was introduced on the XK 150
So (for the Jaguar “purists”) the Tung-Sol P241D flasher would be correct for XK 120s with flashing indicators for the year 1952 and 1953. But from a “functional” point of view, it would be correct for the later XK 120s (and XK 140s) as well.

Unfortunately, the Tung-Sol P241D is a later flasher never used by Jaguar. The 241D with the right angle mounting bracket is the flasher supplied to the Mark V and XK120. The 241D is very rare, while the P241D is quite common.

You’re correct: one extra letter does make a difference!!
I meant the 241 D indeed. See photo of a correct Tung-Sol 241D. 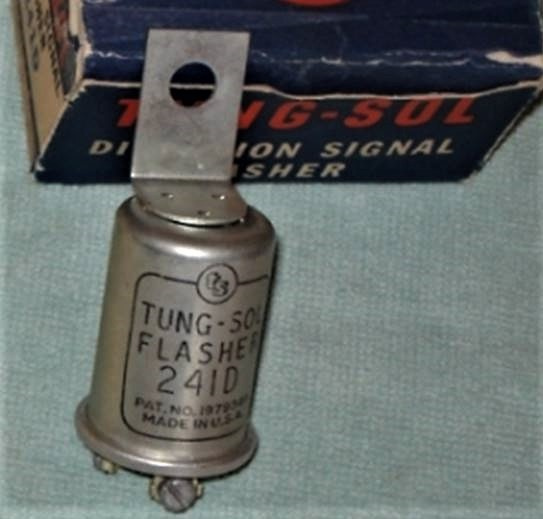 FLASHER: Urs book , Vol 1, Electrics Chapter P178 cites the P241D, with a photo, perhaps incorrectly, as the connections including the mount tab are different from the 241D, and are not what I have seen on a 120, nor does the flasher seen on P177 with the single mount tab appear to be a “P241D. Some time back Roger Payne wrote: . . A June 1954 (car) … would have been fitted new with a Lucas FL3 flasher unit, albeit undoubtedly long gone as their marginal reliability had them superseded by the FL5 unit in 1956. Thus any Jaguar spare parts for failed FL3 received the upgraded FL5 replacement from 1956 on. …(and) invariably now have an FL5 unit fitted which is a direct physical/wiring replacement, replacing a long ago failed FL3.T he last of the USA market XK120s also got the Lucas FL3 unit, replacing the earlier Tung Sol 241D fitment, but I have not yet established exactly when that happened. I did pick up a NOS FL3 only a couple months ago - for my XK140 restoration, albeit will be interesting to see how long it lasts. (for originality) …the best solution if you can find an original, exc condition FL3 housing ( a lot of black ink artwork on aluminium canister) (with (or without) failed internals), is to retain the FL3 housing, and fit new FL5 internals (same diameter/shorter height - so with some effort, can be done). But you want an early FL5 with screw-type terminals, and not the post 1957 variety with spade-connectors, albeit both FL5 versions were made for spare parts supply well into the 1960s/70s so they can still be found.”

I note that On p177 the turn relay DB10 is shown with its tabs horizontal…I have seen it also tabs in line front to back. What have you seen. By the way…the turn relay box is now re-made by Lucas, in solid state for about $99 USD. I installed one such. Loo much the same…as with the flasher, for originality the new turn relay…can have an old original top case installed over the innards.