In the end I just made one out of 1" square tube.
Various lengths, holes drilled as needed, welded together and bolted on the tappet studs.
Looks a bit agricultural, no offence to farmers.

The head with water in 1B was the first effort.
The back of the head, and the outside edge came up 2 or 3mm quite easily.
The front inside edge, at the 1B end, was stubborn.
It looked like it was stuck on only 2 or 3 studs at most.

Nothing to loose, I put a 2 ton bottle jack between crankshaft and head,
There was a 6mm thick alloy plate on the jack against the underside of the head for protection and spreading the load.
The crankshaft end had a bit of alloy to protect the surface.
The jack is old and the seals leak a bit, but I reckon it was pushing up with at least 1 ton.
That did not move the 1B inner edge at all.

One of my employees with a much beefier build than mine brought in his FBH.
I pumped the jack while he swung the FBH and after about 20 hits the head budged.
It is now up 5mm all around.

It is amazing so much force and impact was needed, and it might only be 2 studs causing the trouble.
Once the head is off I can see what gives. 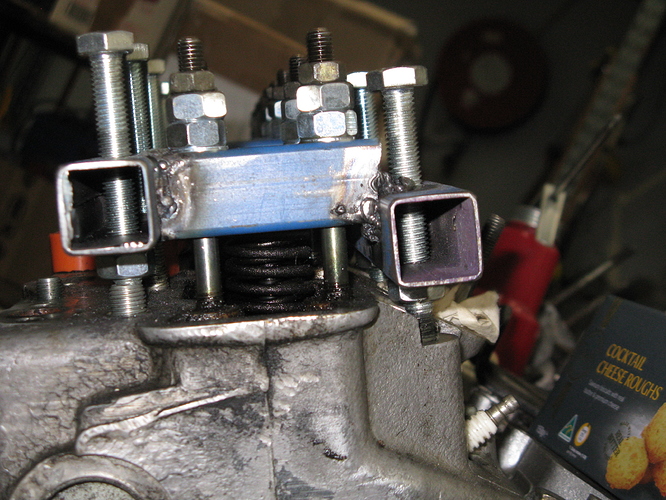 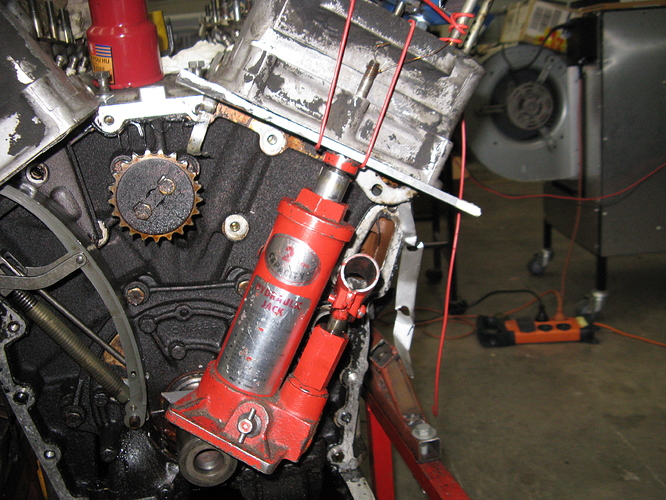 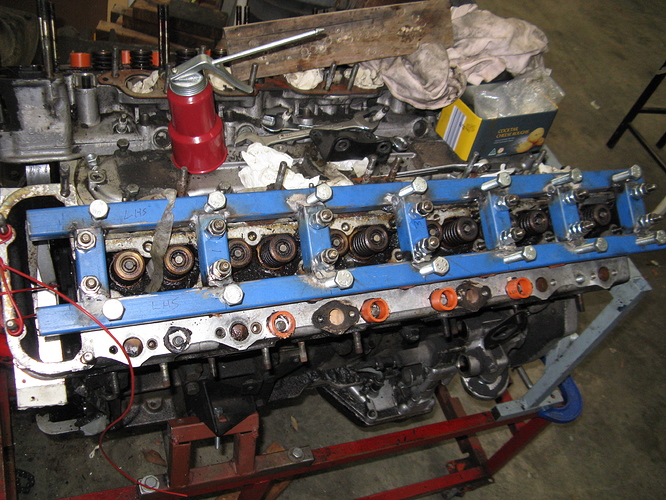 I believe what you will find is that some of the studs may have been exposed to water/coolant and have corroded. Pulling the head is most likely just causing the deposits to jam up as the head is pulled up. If the head is damaged and/or unusable, find the appropriate size hole cutter and cut around those studs. Yes, it will damage the head, but, being aluminum, it can be welded up and redrilled. I went thru this same problem years ago with an Alfa Romeo head. Tried everything, buy finally had to cut the head away from the studs. Good luck!

I know this is a zombie thread but how did the other head go? and what hammer did you end up using? brass? or rubber/plastic?

Definitely put a dial indicator on that crankshaft; you would be surprised at how easy it bends.
Correction of main bearing journals is done with a BFH on V blocks…jack probably puts more force on the unsupported snout.

Too late to worry about that, the deed is done.
The whole engine had been run for years without inhibitor in the coolant and maybe an oil change every leap year.
So the heads were tight, and after removal so corroded as to need a lot of work.
Luckily brand new heads available at reasonable price.

Hey speaking of new heads, did you get them from SNG? also are they bare with no valve guides and or seat? or does it come with new valve seats and guides and if they do are they pre machined? The prices are surprisingly good and my heads have a few leaking valves and seem to be stuck fairly tightly too. I’d imagine it would be far cheaper to get new heads than trying to get a machine shop to put all new seats and valve guides not to mention if I damage the head getting it off.

Yes, from SNG UK.
The heads have valve seats and guides, all ready to go
You have to take all the studs out of the old heads and transfer to new heads.
That takes a while, especially if you have some tight ones.

In the V12 I am rebuilding the valves were O.K. so they are reused.

Cool! I believe one of my heads has 4 leaking exhaust valves and 1 intake. While the other seems to only have one that leaks just a little. Probably cheaper to buy a new one than try to get it serviced. I wonder are these heads new old stock from the 80’s and 90’s or are they casting new ones? they seem to be asking a very reasonable price if its the former. I wonder how many they have. They must have purchased all of the heads Jaguar had when they stopped making them.

I once saw a video of the transfer line Jaguar built to machine the V12 block, and I guess they had part of the line for machining heads. It might have soldiered on a while with some modifications to machine 6 cyl engines but doubtful that line has been used the last 20 years or so. Probably sold as scrap or maybe shipped off to India.
Any new V12 heads would have been made on that line more than 25 years ago.
It is kind of amazing you can buy new heads, perhaps Jaguar overestimated how many they would need for regular production needs.
No doubt there came a day when management had a big clean up and auctioned off all those heads to parts dealers like SNG.