In the colder weather I sometimes have to pump the hood and trunk struts to get them to stay open - the hood being the worst offender bonking me on the head a couple of times when checking the oil.
I looked around for some replacements and ordered a couple of URO hood struts from Rockauto, not too bad at about $20CAN apiece. Unfortunately, they don’t list the trunk struts.

Going through the archive, I found a helpful post about struts in general and how you don’t have to pay silly money to get replacements and can go reasonably priced generic if you know the equivalent specs …

Anyway I found one post from about 15 years ago or so had a set listed with part numbers but there seemed to be a typo as far as which was which (hood/trunk). This post was especially useful as the parts are still readily available.

I can’t get out to the car ATM as I’m snowed in and there’s about a foot of snow on top of it - so which one of these would be the trunk strut? I’d think the hood was the heavy one, but looks like that’s the shortest …is the long one the trunk?

Hi Larry, I just nipped out and measured mine. The boot strut is 19 3/4 inch when extended, The Hood strut is smaller at around 16 3/4 inch extended.
hope this helps.

More than helps, exactly the info I needed! Thanks @Casso !

So the corrected info is:

Ok, so after much looking around and comparing, I ended up ordering a pair of these from Rockauto for the trunk, about CAN$14 each, so not bad.

Larry, please let us know how the struts are working out for you. I’m especially interested in the hood struts. I haven’t replaced them yet. I changed the trunk struts with these Strongarm ones. 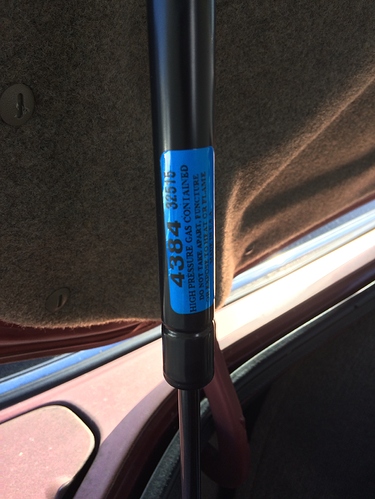 Joe - I got the hood struts from Rockauto too - I didn’t have to try matching them up as they were listed as OEM (URO) replacements in the 94XJ40 section under Body. Roughly 15 bucks apiece.

Parts arriving around end of the month so I’ll know if they work right then I guess!
They had Strongarm brand too, but you know me, I like to keep costs to a minimum without getting rubbish, so went for the URO brand. Probably the same anyway!

They had Strongarm brand too, but you know me, I like to keep costs to a minimum without getting rubbish, so went for the URO brand. Probably the same anyway!

Larry, did you notice the ‘Economy’ part listed costs more than either of the ‘Standard’ replacements (the URO and Strongarm brands)? I’m confused - maybe I don’t understand the meaning of ‘Economy’!

Larry, did you notice the ‘Economy’ part listed costs more than either of the ‘Standard’ replacements (the URO and Strongarm brands)? I’m confused - maybe I don’t understand the meaning of ‘Economy’!

Mike - I did notice that but …

Ours is not to reason WHY - All we do is scoop and BUY!

The hood struts arrived today and fitting them took all of 5 minutes. Propped the hood open with the butt end of one of my beefier fishing rods that happened to be in the trunk, removed the clips on the old ones and snapped the URO replacements in place.

I think the old ones must have been halfway shot when I got the car 8 yrs ago as these new ones do half the lifting unaided. Just great. Couldn’t be happier …next - the trunk!

Larry, that’s a good news that those URO struts are working so well. I’ll consider them especially for a low price.