What is the part number of the key for the rear wing valance of the Mark V?

Please teach me what the part number of the key for the rear wing valance of the Mark V in the attached photo. 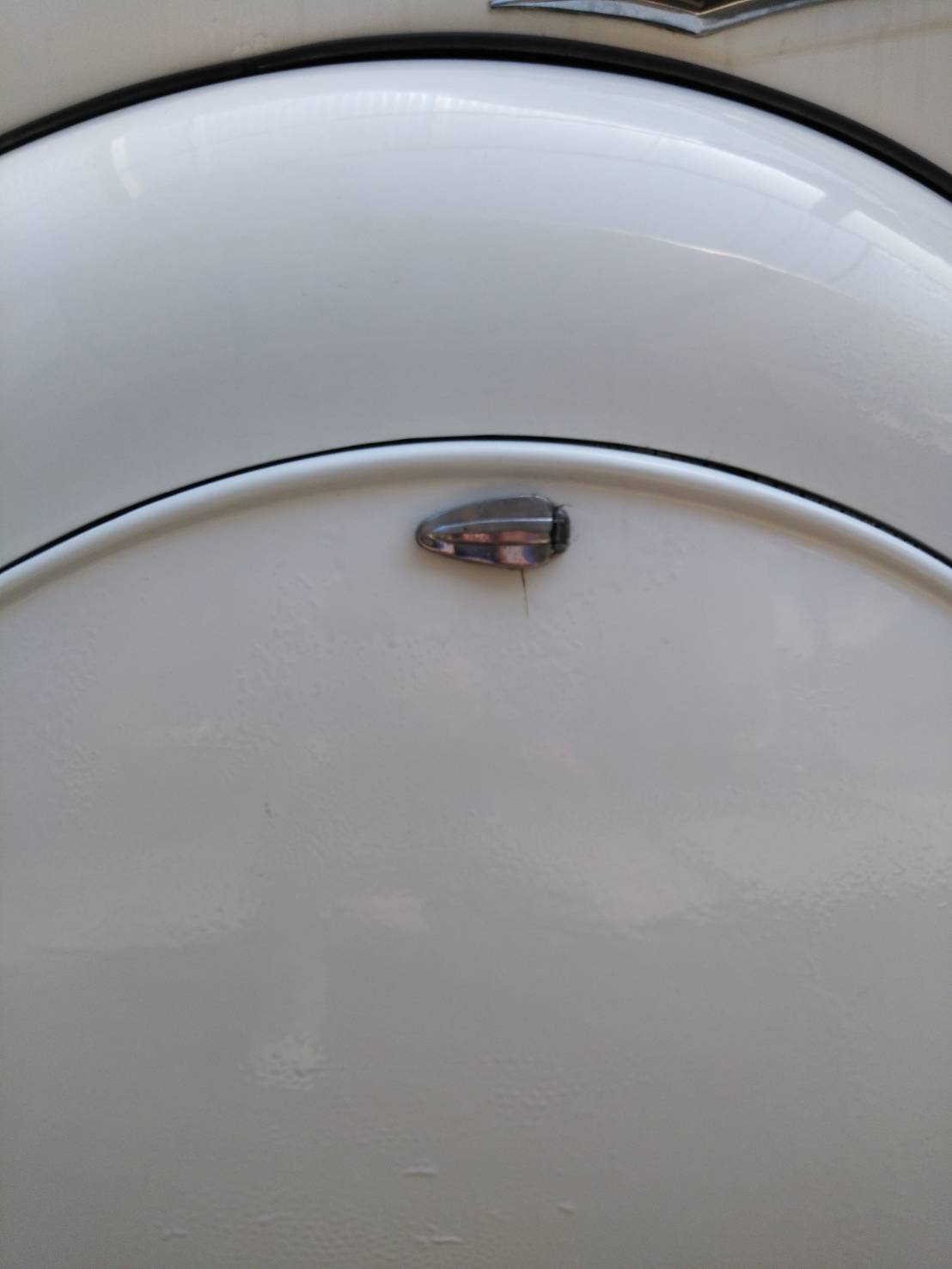 It uses the same key as the rear spare wheel compartment door budget locks, that I believe your mechanic was just able to get open?

The tool is the same “C.2798 Budget Lock Key” that Rob posted a photo in this other thread: How can we open the wheel compartment of Mark V?

Also known as “Tee Key” or T-key according to the shape, although the MKV tool is really an “L-key”.

The chrome escutcheon fitting is the same part as used on early E-type “Open Bonnet Latch” cars, and thus easily available, I believe I have 3-4 pcs extra!

Once you open that budget lock the spat will open and can be swinged down so that you can lift the front up and slide the rear pin out of it’s bracket and lift the whole spat off the car.

Or has someone fitted something else in there? I am not 100% sure of the photo.

Maybe I forgot to say, if it’s not obvious, that from the narrow end you can just lift the lid, it’s hinged with a small spring form the round front side, it may be a bit stiff from crud and rust if it hasn’t been operated for a decade or two. Then you can see the square hole for the “T-key” or “L-key” to open the budget lock.

Thank you very much for the information. According to it, I am going to search for a tool which can be a replacement at a nearby store. And I tell you the result.

The Jaguar part number is C.2798 the L key for spats and spare tire door.
Mark V is the only Jaguar model it was ever used on. Australia was the biggest market for the Mark V so I would try there. 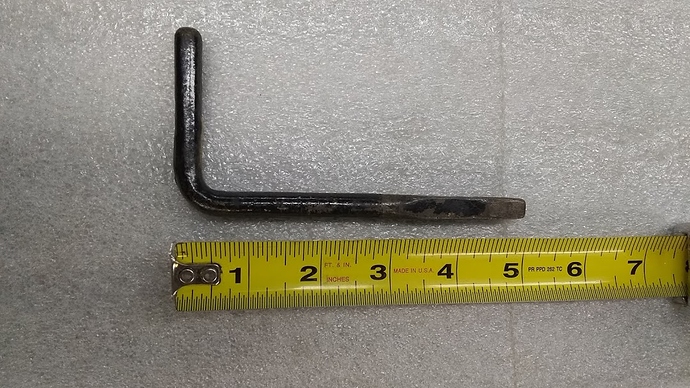 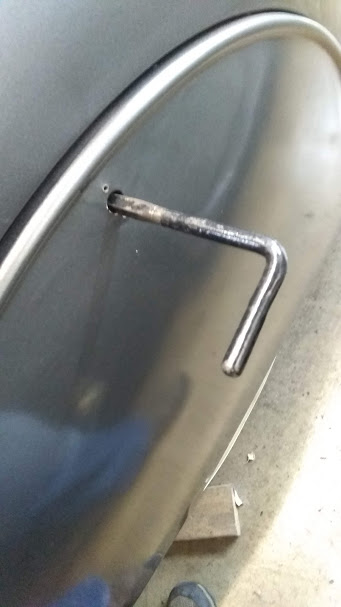 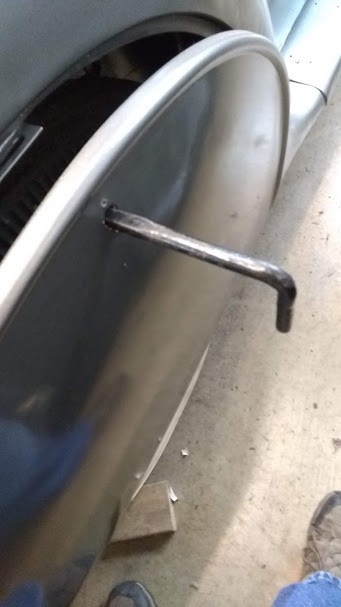 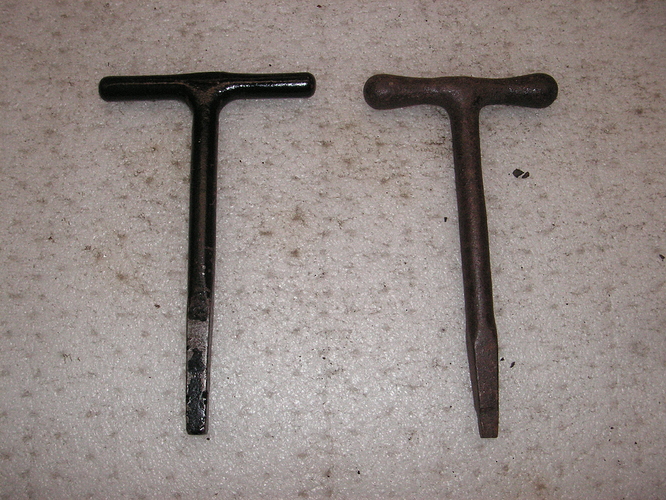 Please teach me what the part number of the key for the rear wing valance of the Mark V in the attached photo.

If you contact me direct on rogerpayne@bigblue.net.au then I can discuss selling you an original C.2798 ‘L’-KEY as was unique to all Jaguar Mark V - not used in any other model Jaguar nor indeed any other make of car. These C.2798 Keys were actually made (cast) in-house at Jaguar factory and not bought-in like most of the other tools in the Tool Kits. So you wont find one other than being ex an original Mark V, albeit I have seen some efforts at making one up by bending a bit of rod which of course struggles to replicate the tapered square-section key end.
But I only just now saw this thread, so a quick look in my boxes of spare tools found a couple spares as per photo… The factory engineering drawing advises these are made from Malleable Cast Iron removing all sharp edges with a ‘Barrelled Finish’, albeit I am still undecided whether originals were then blackened or not - certainly I don’t believe they were painted black as is often found 70 years later. Dimensions are 2-3/4" wide and 5" high (tip to centre-line of the 3/8" diameter ‘handle’) 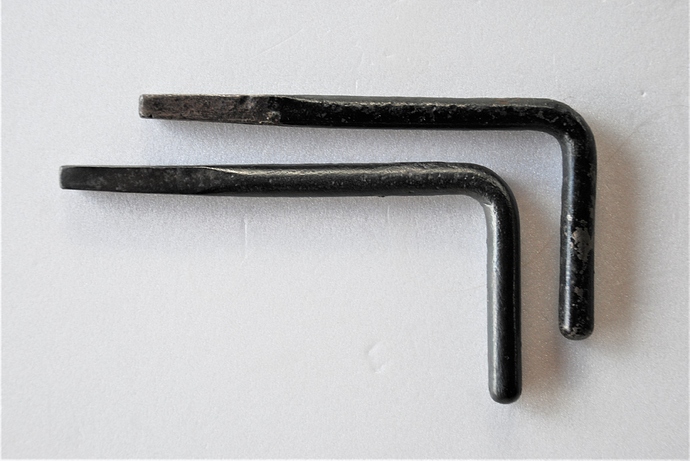 If you can’t find one, you could buy a Tee key which are still reproduced for Jaguar, Triumph and others

As per the C.2798, these 2072 "T’-Keys were also cast-up in the Jaguar factory, again from Malleable Cast Iron, and were supplied in pre-war SS-Jaguar, Mark IV, XK120, XK140, XK150 and outside-bonnet-lock 1961 E-types unchanged. So always as per the one shown on the LHS in Robs photo, but never with the ‘shaped’ handle as in RHS. So again as is the C2798 L-Key, this 2072 T-Key is unique to ex-Jaguar sources, but given the T-key concept was shared by many other users there are a proliferation of non-original alternatives, ex MG, Triumph etc, and indeed non-automotive users… 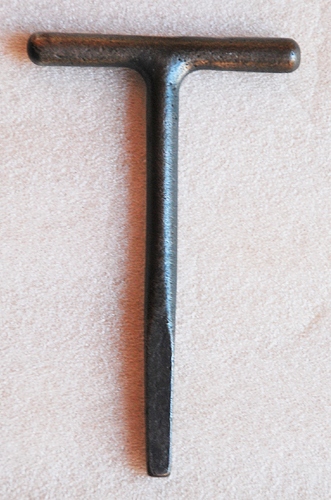 Again, some debate whether there was any added blackening finish after the natural oxidation colour of the casting process, and maybe it varied 1936 to 1961 period of manufacture and use, but again definitely not painted black.

Mark V is the only Jaguar model it was ever used on. Australia was the biggest market for the Mark V so I would try there.

Putting that into perspective, there were 7819 RHD and 2684 LHD Mark V made, including 2-1/2 & 3-1/2 litre, Saloon and DHC models. Australia received 2293 new RHD only Mark Vs indeed being the largest EXPORT market, albeit there were more sold new in the UK Home Market. The next main markets for RHD cars were all the other British Commonwealth countries, New Zealand, South Africa, Malaya, India etc, but also to Embassy and Military staff based in many other countries. The LHD cars were (mostly) all exported to the various European countries, Scandinavian countries and of course Canada, USA and South American countries…

But survival rates, given our climate and propensity to hang onto cars for a longer time than European and North American buyers certainly has resulted in a good supply of Mark Vs and parts thereof, typically with minimal rust (if any) but sun baked woodwork and leather inside… BUT correct/original Mark V tools are still hard to find, given most (not all), are also suitable for more cashed up XK120 buyers…

Ok Roger, that settles that question, though surprising as removing the sharp edges would add some labor cost, but how on earth did you manage to get hold of factory drawings of tools? Inside trading?

Barrelling isn’t too labour intensive, I did the first part of my apprenticeship in Elliott- Lucas (no affiliation to the dark lord) and part of the process to manufacture the range of pliers was barrelling.
They were large horizontally mounted drums filled with coarse stones and when the pliers came from the forging shop having had a forging flash stripped they went into the barrels and were rotated for a few hours to rumble off any sharp edges.

I’m sorry for telling you the result so late. Happily I could find and buy an adequate key for the lock of the rear valance of MK-V at a nearby shop… By the way, I estimated that I could also lock the hood with the same key. But that is not the case. The key is too big for the hood lock. So I must still search for a key that would be adequate for the hood.lock. What is the size of every side of the square at the tip square of the Jaguar original hood key? I estimate that it would be about 6.3mm. Is that right? If so. I can attain one in a nearby shop.

I’m sorry for my having a mistake. I noticed in the meantime that I should use the same key that I use for opening the door of MK-V, in order to open and lock the hood. Probably I should turn the key after inserting clockwise when I intend to lock the hood. Is that right ?

I am not sure what you mean with the word “hood”.

In England the word “hood” is usually used for the convertible soft top.
In the MKV Manual you have the factory refers to the “hood” in this meaning, like if you look at the section in the MKV Operating & Maintenance Handbook about how the “hood” can be folded down and erected again on the “coupé” referring to the “Drophead Coupé” models of course.

In the USA I believe people use the word “hood” meaning the piece covering the engine, what factory and Brits in general call “bonnet”.

“Motorhaube” in German, maybe you mean that? But AFAIK you could not lock the “bonnet” nor the “hood” (convertible top), only the doors and trunk, and petrol (fuel) filler flap of course also has a lock barrel and lock mechanism, as well as the ignition switch.

British English: Bonnet
US English: Hood
German: Motorhaube
Swedish: Motorhuv(en)
Italian: Cofano (yes, the same word as for “coffin”, or “safe”, or “chest” or “cashier”)
French: Capot
Spanish: Capó
Finnish: Konepelti (if you translate that directly it means machine cover, the cover being a plate of steel. pelti = tin, like in a tin roof, the tin roof on the mahcine / engine)

The passenger side glove box also has a lock, but that’s a different lock barrel and different key (and different to later Jaguar models, unique to the MKV I believe, unless also the MKIV and earlier models used the same short lock barrel.

Anyway, I hope we can find common terminology!

We can always refer to the pages and pictures in the MKV Operating & Maintenance Handbook.

The key is too big for the hood lock

So if you mean the bonnet (aka Motorhaube / hood / capot) so originally you can not “lock” it, as the securing mechanism is operated form both sides under the dash (instrument panel). Maybe someone has added something like you already had an extra lock in the trunk lid?

In an open car (the Drophead coupe) you CAN lock the door so you can not open them without a key from the inside (as the mechanism locks the handle to the door chrome trim) BUT someone could still climb into the car and open the bonnet, if they are clever enough to find the handles that operate the bonnet mechanism.

In have never thought that it wold be a problem, but then again I never leave the MKV DHC anywhere outside overnight, always in a safe garage.

British English: Bonnet
US English: Hood
German: Motorhaube
Swedish: Motorhuv(en)
Italian: Cofano (yes, the same word as for “coffin”, or “safe”, or “chest” or “cashier”)
French: Capot
Spanish: Capó
Finnish: Konepelti (if you translate that directly it means machine cover, the cover being a plate of steel. pelti = tin, like in a tin roof, the tin roof on the mahcine / engine)

It may be that it’s just stuck. FWIW I think in general that it is called the trunk.

IIRC it should lock clockwise and unlock anti-clockwise, maybe that is why a PO (previous owner) had fitted a custom extra lock on the trunk lid?

It may be that the trunk lid handle & lock are from another car, can you see any number on the lock barrel? If so, does it match the number on the fuel filler lid lock or ignition switch/lock?

Ahh, sorry you’re right. So clockwise rotation of the key pushes the tongue out and locks the handle and turning the key anti-clockwise opens it.