What Magazine to Buy?

Gentlemen: With my birthday coming up, I would like to ask for a subscription to a magazine that focuses on Jaguar vehicles. Both of my cars are from the nineteen seventies. Perhaps there is a magazine that features that ear. Your opinion wold be appreciated.

Is there anything other than Jaguar World that is fully relevant?

I don’t actually buy it…. More of a see in bookstore and flip through it sort of thing.

Jaguar Journal is the only all-Jaguar magazine published in North America and the world’s oldest Jaguar magazine. The first 60 years are available in searchable text hi-res pdf files on a USB memory stick. In another couple of years I’ll add the next decade.

It is bi-monthly and used to be restricted mainly to JCNA members (although it has always been available to purchase on mailed subscription). Nowadays anyone can find it on the Zinio virtual magazine newsstand https://www.ziniounlimited.com

Unlike most British car marque magazines, Jaguar Journal covers current models, not just older cars. JCNA is a smaller group than, say, the JEC. so JJ is smaller too, but for US, Canada & Mexico readers it is a good option.

But then as editor, I would say that…

I just went to Zinio.com and entered Jaguar Journal as the search term and it came up fine. No ‘The’ prefix… 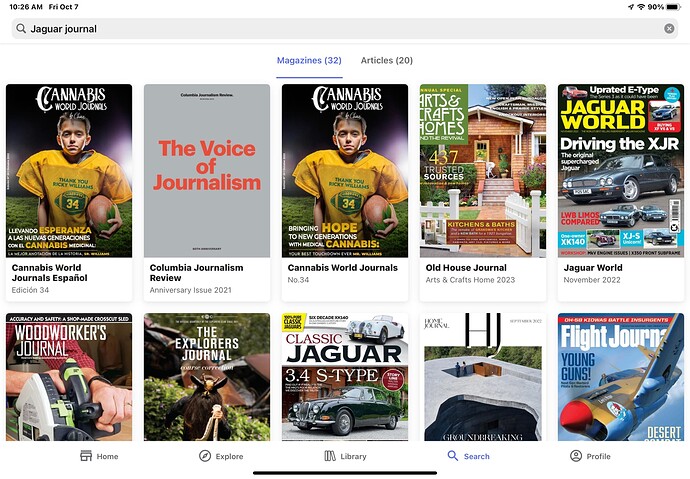 It appears I downloaded Zinio Unlimited, not just plain Zinio. When I downloaded the correct version of the app I was able to find Jaguar Journal.

I’m also glad you were offered the Cannabis Journal. I was afraid Zinio had falsely profiled me. For the longest time YouTube was certain I spoke Spanish, and to this date the MLB At Bat app thinks I’m black, 100% African American targeted advertising. I can’t imagine what stereotype I tripped in their algorithm.