What nuts on exhaust manifolds?

Just replaced all the nuts holding the exhaust manifolds to the head with brass ones. Right or wrong? I also plan to replace the manifold to downpipe ones with the long brass nuts. There is too much thread showing below the steel nuts at the moment for my liking (thinking of possible problems removing them at some point in the future). Is Copaslip lubricant recommended in this instance?

Brass nuts every time Chris, long nuts on the down pipes as I have done,
preferably on S/S studs, but not S/S nuts on S/S studs.
BTW do you remember the silencer position on the XK with the C type
Manifolds?
Peter B

The original nuts were made out of Bronze, not Brass.
Unfortunately both Bronze and Brass are very general terms as there is a considerable number of different alloys of Bronze and Brass, and thus final properties, so in simplistic terms the Brass Nuts as readily available are invariably more prone to stripping than the origjnal Jaguar Bronze Nuts. Been a long time since I have tried, but when I did I couldn’t find a source of Bronze Nuts readily available so I have instead sourced a second hand set in perfect condition from an untouched/extremely original Mark VII engine I have spare.

You will be able to get away with using brass nuts if you don’t try to overtighten them, and have a supply of spares if you feel any start of stripping.

My view is ALWAYS, stick with the design solutions including material selection that Jaguar engineers came up with when designing the XK engine, unless you are confident you are a better design engineer and metallurgist. Some modifications may not matter in practice, but others can cause unexpected problems, so if you can minimise the changes you make. Using brass nuts on stainless steel studs is two material changes, and in this case both exasperate the materials incompatability in what is considered an extreme operating environment.

BTW do you remember the silencer position on the XK with the C type
Manifolds?

Thanks, Peter. I do remember that the two exhaust pipes were arranged to finish in front of the LH rear wheel (somewhat a la C-Type) but can’t remember what type of silencer(s) was fitted, or exactly where. It was a long time ago! I do remember that it was suitably rorty!! Found a couple of pics of #660864 after I owned it, It has gained HD8 carbs, rather than the H8 that were there when I had it.

Thanks for the useful and full answers, chaps. I had read somewhere recently that bronze was the original material, but I’ve not found anyone offering them. I don’t think I want to take the brass ones off any time soon, as some of them are a right pig to get to. I took the manifolds off in the first place, because there was no nut on the lower front stud of the rear manifold, which annoyed me, plus all the nuts were steel anyway. I actually had to chip off a bit of the vitreous enamel and do a little judicious grinding with the Dremel to get clearance for the nut. Even then I had to begin with that one first, with just enough thread showing to get the nut started.
The long 9/16"AF brass nuts on the downpipes would be hard to strip unless you’re very mechanically unsympathetic, I reckon.
I’m hoping the brass will dull somewhat with age.
Chris

I would have said the nuts were brass but talking with an engineering bloke an XK owner (several) down southhampton in January he noted they were bronze or similar and actually had packets of them there with this description on it.
I would have said he knew what he was talking about and he manufactures stub axles for XK’s.
one for the metallurgists!
Ps just read rogers piece above so bloke was correct

I had read somewhere recently that bronze was the original material, but I’ve not found anyone offering them.

McMaster-Carr is the complete source for your plant with over 595,000 products. 98% of products ordered ship from stock and deliver same or next day.

I like the long hex nuts for the downpipes. The more thread you cover the more friction. I’ve also had really good luck with Nord Lock washers there. I really would use any kind of anti seize there. They aren’t going to get stuck and you don’t want them falling off.

Erica, Did you mean to say that you “would [not] use” anti seize on the down pipes?

My bad, no I would not use that. It’s hard enough to keep them on there.

I sourced the correct bronze nuts which I’ve used on both my Mk2 and XK120. Since I bought them in quantity, I have listed the excess on eBay.

See attached……………
These are the exact original H8s that were fitted to 660864 when you owned car - and were as fitted not by factory, but from new as per Service Bulletin SB95A special package of C-type head, Inlet Manifold and H8 carburetters as only available to ‘selected’ customers intending to seriously race their XK120, as in customers with ‘influence’ with Lofty England. So these are genuine C-type/SB95A specification H8 carburetters, as quickly identified by having 5001 body casting number, rather than the later XK140MC optional H8 carburetters, now with AUC6000 body casting number.
The H8s have just been 100% restored to as-new condition as evident in photo……- not the best pics, but readily at hand…… 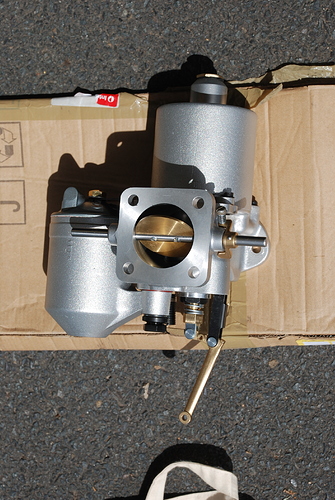 Roger, I’m gobsmacked!! I can scarcely believe you actually now have the H8s off my old car. They certainly look a lot more presentable than I remember. I do recall a stripped thread on one of the float bowl lids which I bodged with the use of Araldite… I can imagine that the Archibalds, as the South Island Jaguar distributors, would have had access to special racing parts. I didn’t realise quite how special these carbs were back then, but I certainly remember being rather proud of them. I’ll have to read your H8 article again - which issue(s) of the XK Gazette did it appear in, do you know? It would save me a lengthy search!

On the subject of the cylinder head, I can add a bit more information. When I got the car the head was natural aluminium, and I imagine it was a C-Type head. I was told that it had D-Type cams. It certainly revved well enough! Some time after I acquired the car I took it down to the Cambridge area from my house in Auckland, to show it off to a friend from the Auckland JDC, Gerald Fogg. Incidentally, he owned a 2 1/2 Mk IV, and an SS1 tourer. After a 90mph spin round the country roads I was sitting in the XK chatting to Gerald standing beside it, prior to setting off from his farm to return to Auckland. The engine was idling, when suddenly there was a “clunk” and it stopped dead. We exchanged puzzled looks, and I pressed the starter button but the engine didn’t move. Lifting the bonnet revealed a scene of carnage… There was timing chain hanging out of the smashed cam cover and forward part of the head - oh, dear! Obviously the eccentric sprocket for adjusting the top chain had let go for some reason (not of my doing!) Long story short - upon getting the car back home and removing the head, it was discovered that one of the cams had snapped near the sprocket, the valves had lightly hit the pistons, and the whole thing had instantly locked solid. Imagine if that had happened at 90mph… Luckily, the pistons were only very lightly marked, as the engine had only been idling. Getting the car mobile again (it was my only form of transport) was the priority, so I whipped off the head from the 3.8 Mk II I used to own (and had sold to one of my flatmates) and slapped it onto the XK. I put the carbs and manifold back onto this head, and no doubt there would have been some sort of mis-match with the inlet ports, but I didn’t worry about that sort of thing. The old head was no doubt dumped, though today it would probably be judged as fix-able. So the car left my ownership with a 3.8 Mk II cylinder head, and that’s the story! One last thing - I have a feeling I painted the B-Type head red at some point.

Thanks for further history/background on the Cylinder Head and the H8s. I had to do a fair bit of detective work to identify the H8 origins, with zero clues/leads regarding the original C-type head and original H8 Inlet Manifold, both presumably scrapped long ago. Your story confirms that probability.