Hi,
I have had a number of incidents with the wife’s XJ8 where the main coolant hose between the radiator and the water pump, has been blown off. I kept tightening the hose clamp until the spout on the water pump actually broke, so I had to replace that.

Last week it was blown off again, pulling the bead of the spout off.

Has anyone experienced this? Should the coolant really have such high pressure??

The car is mainly being driven by my wife and our daughter, so we’re not putting too much strain on it…

Thank you for your input!

It always helps if you put the year of your car in your post or in your profile.

First thing I would do is replace the upper radiator hose and use a new high quality hose clamp being sure to place it behind (closer to the pump) the bead on the spout. After that if you have this problem again then the coolant system is somehow overpressurizing to the point that it is blowing the hose off. But this doesn’t make a lot of sense because you have a pressure relief cap on the coolant tank.

Are you doing the work on this yourself or is a mechanic explaining this to you. “pulling the bead of the spout off”, how is that even possible ?

Hi Grooveman,
Oh, sorry about that; the car is a 1999 but the engine came from a 1998 donor car. I agree to your possible culprits and first couple of times this happened, I actually landed on the clamp being the most likely explanation and replaced it, making sure it was thoroughly tightened (I do most of the work on our cars myself having grown up in my dads workshop and nurtured this hobby for half a century.) and carefully located behind the spout bead. Next time it happened it was the bead and part of the spout that gave way and broke off. I guess I overtightened it. I then replaced the spout and thought we were all good.

This last time it was only the bead that came off with the hose. Examining the bead, I found it to be quite brittle, actually crumbling…, maybe because it came from the old engine?

You’re quite right about the ventilated filler cap. I didn’t think of that. So, it shouldn’t be able to be over-pressurized.

I noticed there are some ‘corrugation’ on the spout, so I have re-attached the hose and carefully tightened the clamp. If I keep an eye out I should be able to run with this, maybe with an extra clamp for extra safety, until I find a new spout.

Thanks for your input!

You need to replace all the resin coolant components as they are deteriorated.

Also the spring clamps are actually better for the resin outlet and thermostat fittings because they keep constant spring pressure on the hose and they have no ‘flat spot’ where the worm gear is so they don’t deform the resin. (they ‘self-tighten’)

Yeah, maybe that is the best way to go! As the the clamp, I actually cannot see how to be able to use a spring clamp on this particular fitting. No way I can get a tool in there to fit it… 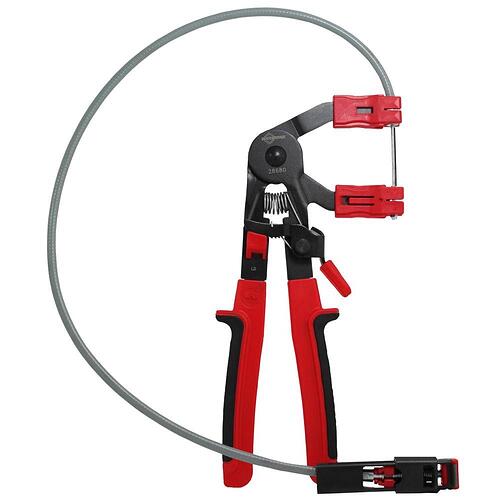 That will fit in there…? I’ve seen these things but never actually got around to getting one… There’s a time for everything. I guess this is it for this one!

I just learned that there is an aluminum replacement available for the thermostat housing! Great stuff! Pretty inexpensive too, at £27.56 at SNG. No-brainer!