So…My 3.8 in my mk ix has died. My best quote for a rebuild is way to expensive. A friend offered me his 84 xj6 with a rebuilt 4.2 motor for next to nothing if I can use the any parts. Has anyone tried dropping a 4.2l in a mark 9? The only other option that I can think of is lumping it—but I’d rather have the Jaguar motor in it if possible.

I hate to say it but I think a 350” V8 would make the car a pure joy to drive. And the Mk10 is so cheap that you can forget about destroying a valuable car.
A 4 speed auto with OD on 4th is ideal.
You mist have read about the 4.5L Daimler V8 which the factory put in 2-3 Mk 10s. They were seriously quick😎

There’s a MK9 here in UK with the conversion half done and the abandoned because of its complexity.
At first this might seem a quite an easy swap, but it isn’t.
The MK9 type engines are a tight fit longitudinally. The XJ6 engines are slightly longer, just long enough to give lots of problems. The heads a slightly longer at the back which places them right up against the firewall, so that you can’t fit the heater pipes in. The water pump is longer so that you can’t get the radiator in. The crankshaft pulley also fouls the cross member.
The engine mounts are completely different, and the sump on the XJ6 has ears so that you can’t get the exhaust pipes away. The XJ6 has an alternator, so that you can use the dynamo driven pump.
You can’t get the oil filter off the XJ6 engine as it would foul the MK9 chassis.
Not recommended…

Joel, it will fit, you just may have to use the MKIX auxilarys, especially the sump. The block is only about 1/2" longer due to the extra water holes in the head.

I don’t know about the '84, but the 85-7 XJ6 block does have engine mounts further back, and you will have to fab new mounts if that is the case. I have 2 '87 engines and considered this swap seriously for my Mk9, given all the benefits of the later engines including Bosch fuel injection. BTW, I have an XJ6 sump on my 4.2 Mk10 as well as XJ6 exhaust manifolds and the stock exhaust pipe clears the sump with no problem, so I don’t see that as an issue on the 9 unless it’s with the steering shaft, but I haven’t direct experience. You would also have to modify the inner fender wells, at least for the s3 engine. Unless the '84 has the older block, it gets to be too big a project, as has already been said. Someone on the XJ6 forum could answer that.

I ultimately decided that lumping is the best option for me, since I want an upgraded transmission, and as pointed out already, the narrow front of the Mk9 engine bay is a problem. Now, when I can do that is a big question, since I have three cars under restoration right now. So, please stay in touch if you decide to do either conversion.

Unless the '84 has the older block, it gets to be too big a project, as has already been said. Someone on the XJ6 forum could answer that.

Or I, all XJ6s had the same mounting position, no matter what type, 68-87. The front mounts will work in the E Type and others but there was a change and it must have been after the Mk IX. The blocks are slightly longer towards the transmission and there was something about the rear seal as well. Don’t put V8s in everything…

I just installed a 4.2 into my Mk1…used the original engine mounts, original water pump, generator, etc. No real issues. JS

Jeff, you are the first to report that you have actually completed the project. Glad to hear it went well. Did you use a carbureted system, or the EFI? Do you have any photos of the project?

Thanks! I will take a look at the donor engine tomorrow and give it much more serious thought.

On the carbs, I went with twin HD8s, wanted to keep it looking period correct. JS 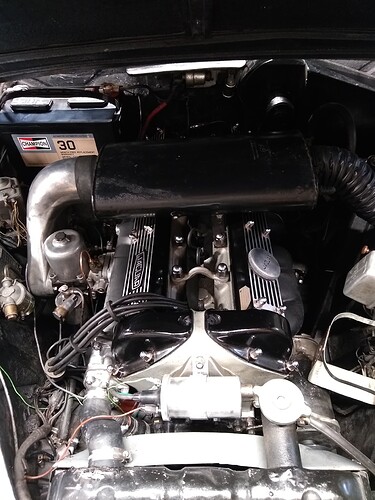 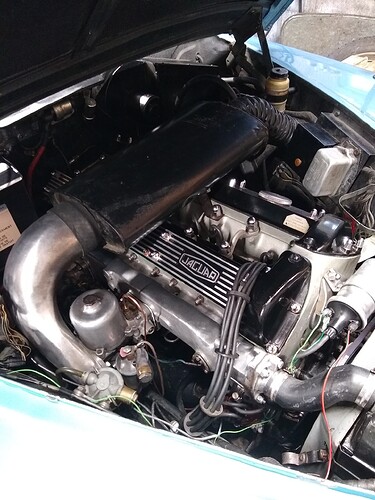 Ron, the later blocks have bosses for the Engine mounts in both locations.

Hmm, now that’s interesting, although one would not be able to use all the great XJ6 accessory hookups. I’ll take a look at that.

When I put an early 4.2 (stromberg engine) in my Mk 7 the biggest problem I had was matching the water pump and pulley. I don’t remember which parts I used but all parts came from either 4.2 or Mk7. Actually the rest of the job was surprisingly easy when I was young and ambitious. It’s probably not for the owners who do everything with a credit card in one hand and a cell phone in the other.

I do know that at least the later xj6s had a larger impeller for the water pump, so a different timing cover internally - not a problem except that the shaft is larger diameter (3/4" I think), so you might have to modify the fan. It would be great to use the later nice fan/clutch if it fit - it does not on the mk10, but maybe on the 9.

Earlier, I jumped to the conclusion of using all the later accessories, which is what I was interested in, but I doubt what the original poster intended. Seems like it’s workable to put the 4.2 in mk9 with more of the original setup or at least older components.

All of the discussion here has been tremendously helpful. If all goes well, I will be dragging the 84 jag into my garage on Tuesday. After a fairly significant shop move, I will start removing both engines.

I would ideally love to be able to keep some of the newer goodies on the engine. we’ll see how it all looks like it will fit.

Please keep us posted as to progress. I might have to rethink the lumping scheme. It occurs to me that it might be easy to bolt up with the original Mk9 mounts, then fab the new mounts, leaving the other locations available for the newer goodies. It’s a tight fit up front, but some alteration of the inner fender wells might not be too hard.

I don’t know if it’s in your budget, but had you considered upgrading the transmission (presuming you have the DG250 auto)? Your donor car would have the BW66, I think, but better than that would be to do a John’s Car conversion to a GM 700r4 while you are at it. The people who have done it say it’s transformative. I’m in the final stages of the conversion on my Mk10 (the conversion is done - it’s everything else that needs finishing).

so a different timing cover internally

At least 69 and 82 timing covers are identical (the 69 one shows more pride in manufacturing but dimensions were the same). What did change during xj production was air injection ports, valve sizes, camshafts, slots between bores, external ribbing on the block but nothing interesting dimensionally unless something concerning shafts and pulleys that I’m not aware of. Tach drive if from camshaft could be a problem but easy to overcome with the right valve covers.

you definitely will have to make provision for the water temp bulb to be fitted to the manifold, if using the original MK9 setup (if it is the same as a MK7, with the dual oil and water temp gauge)

from memory, you have to drill and tap into the water rail