Hello all, I’m looking at a 5.3 L V12 XJS, and am toying with the idea of replacing the 3-speed Borg warner auto box with the more recent 5/6-speed J-shift .

Has anyone ever done this? Would there be compatibility issues? ECU? Bellhousing?

It would be fascinating to see the change in performance with a six speed auto. 1st gear on Ford’s 6R80 is 4.17 vs 2.40? for the BW. The 6R80 also shifts substantially quicker.

would be a nice conversion , except for the money,$$$$$ part?
lately after driving some multispeed auto boxes, if where to do an expensive change i’d go for at least an 8 speed auto!
brings up a question WHO is gonna go for a newer 8 speed Dual clutch box??
ron

The main problem you’re going to have with 6speed & higher auto-boxes is the lack of aftermarket controllers for them - as they’re all electronic. That’s no problem for a number of the 4 speed auto boxes, and yes, 6 speed controllers are in development, but I don’t think there are any truly available or proven yet. (Meanwhile mgrs have moved on to 7 to 10 speed autoboxes - all with proprietary controllers & proprietary firmware).

Cracking/reusing a mgr’s trans controller is probably possible, but I haven’t seen much indication that there’s any widespread knowledge on making that happen with any of the OEM boxes (although some high-end tuners seem to have $$$erd their way through it in some instances - not Jaguar specific.).

It’s a nice idea, but it’s going to take figuring out who knows how to adapt the trans control boxes - which usually need like - CANBUS input from the ECU - which the XJS doesn’t have.

The earlier ZF box in the first f the XJ40 were purely mechanical so would be an option but not sure if they would be up to the torque of the V12.

Ron these modern autos shift quicker than a dual clutch transmission so not much point going that way. I don’t know of any controllers for 8 speed autos but here rumours that the tcu unit in the dodge ZF 8hp autos can be reprogrammed.

Hello all, I’m looking at a 5.3 L V12 XJS, and am toying with the idea of replacing the 3-speed Borg warner auto box with the more recent 5/6-speed J-shift .

Has anyone ever done this? Would there be compatibility issues? ECU? Bellhousing?

Give me one good reason WHY!

Same reasons as every car manufacture has moved from 3 speeds to 6 plus speed auto, performance and economy?

Economy gains are debatable, because no Road Tests have ever achieved the figures that the Manufacturers get on their tests.
Manufacturers moved from 3 speed to 4 for economy, not 3 to 6.
I agree that their is a small performance gain, but 99% of drivers couldn’t care less.
But the real ball breaker for me is the repair costs. You can rebuild a 4 speed for less than $500, the 6/8 speeds are thousands, not what the average motorist wants.

Look at the latest Camaro and Mustang, these are both significantly quicker and a tad more economical than their six speed manual siblings.

I’m guessing the BW auto XJS was significantly slower and thirstier than the four speed manual XJS. Members report a significant increase in performance after installing a five or six speed manual. A modern auto would seem to be a further improvement.

These modern autos maybe more expensive to repair but are now readily available secondhand at reasonable prices. Further they are build to handle 500, 600, 700 plus ftlbs depending on the version so they are pretty tough.

I had a 4.2 Daimler Sovereign S III back in the '90s, a wonderful car with the ubiquitous BW auto’box, wich had its downsides, namely too much slip (and even changing the gearbox oil didn’t help) and short-legger 3rd (Drive) speed.
So I’d drive on highways/motorways with poorer fuel economy than a 5-speed car would obtain in 4th…
Really, 8 Km (5 mi.) to the liter cruising at 110Km/h (70mph) is a bit poor…
Now I’m considering this XJS V-12 “retirement/sunday mornings” car.
I’ve always liked tinkering and personalizing cars, so my idea was to upgrade the gearbox and to put some hair on the V-12’s chest…

Maybe a TWR or Arden Jaguar or something along that line.

Your car your rules. Do what makes you happy and enjoy! As an aside. I think the xjs only had the BW box in very early cars, like maybe ‘75? It’s been the TH400 since then. Somebody will correct me on this I am sure.

Miss read the post so withdrew my stupidly inaccurate response

Your car your rules. Do what makes you happy and enjoy! As an aside. I think the xjs only had the BW box in very early cars, like maybe ‘75? It’s been the TH400 since then. Somebody will correct me on this I am sure. 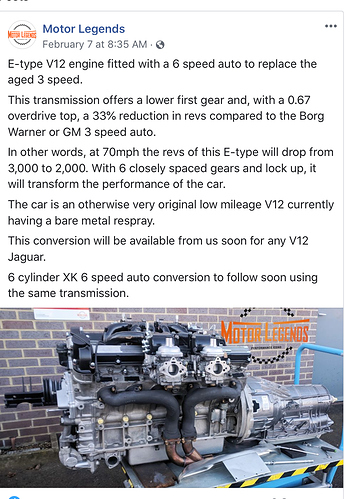 Why go to all that effort and end up with another automatic gearbox?