Also, if you are patient, you can get rebuildable square body fuel pumps on popular auction site for under $100.

timely thread as I have a pair of square bodied pumps from a '51 MK7 that I wanted to positively ID as being the same as XK120, I also have other early SU fuel pumps, some round, some square.

In either case, especially the early ones, the hardest thing is to get the screws out without breaking them

hopefully with the info on this thread, I can identify them

Amazing, this thread dates back to 1997.
Here is a square body Large Capacity Single LCS pump. Jaguar used them beginning with the Mark V and XK120 in 1949 through into the 1960s. Before '49 they used the AUA type. 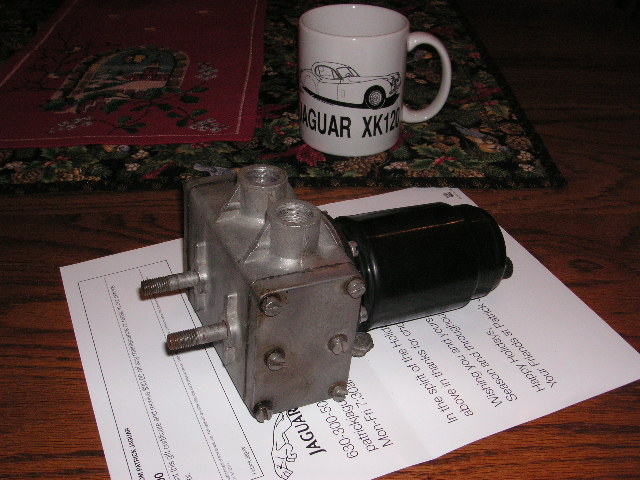 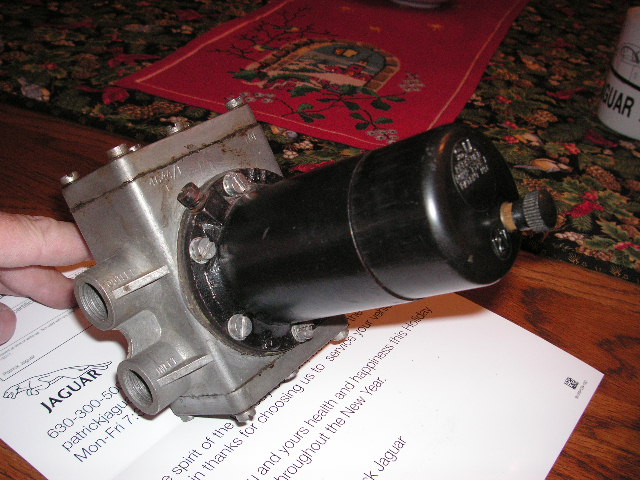 They have a longer coil body than the AUA and AUF types.
The rectangular top/bottom covers were initially cast aluminum and later were stamped steel.
The coil top cover was initially just shaped like a pot, later stepped, and again later with a vent tube.

In either case, especially the early ones, the hardest thing is to get the screws out without breaking them

Indeed! I have bought pumps where screws snapped rather than came out even after weeks of soaking in magic mixtures, so buying one that looks uncorroded is important. The AUF300s are two a penny on auction sites, so no need to buy new bodies, etc. just get another one. The LCS are more expensive so buy well!

Thanks all. I took apart the AUF301 today with some help from the E-Type section. Electrically it is fine, but the valve body is very corroded, though it can be blasted clean and rebuilt.

These two are on ebay now. Are they correct for an early XK120? Thanks for all your help.

Or, how about this one? Harting Petrol Fuel Pump - replacement for SU square body Jaguar other British | eBay 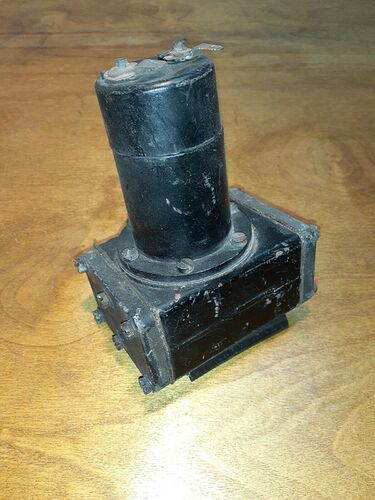 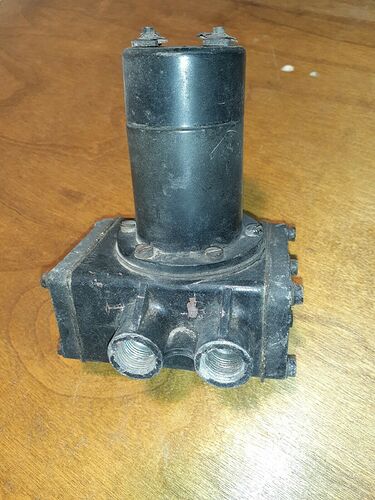 John, I would avoid the Harting pumps, which were a German look-a-like to the SU LCS pump. However, the internal parts are different, and it’s my understanding that repair parts are not available.

That’s curious, I’ve never seen an SU pump with two terminals on the cap.
The Harting pump has the stepped cap I usually associate with SU pumps and would have fooled me if it didn’t say Harting on the cap.

Rob is correct about the two terminals on the black pump’s cap. That’s not how they came from SU. I’ve purchased several used LCS pumps in the past for rebuilding with good success. I’d pass on the black pump and keep looking.

For my most recent rebuild, I purchased an electronic conversion circuit board that fits completely under the cap. These are made by @MarekH here on Jag-Lovers. Marek makes them in either positive or negative ground for a very reasonable cost. 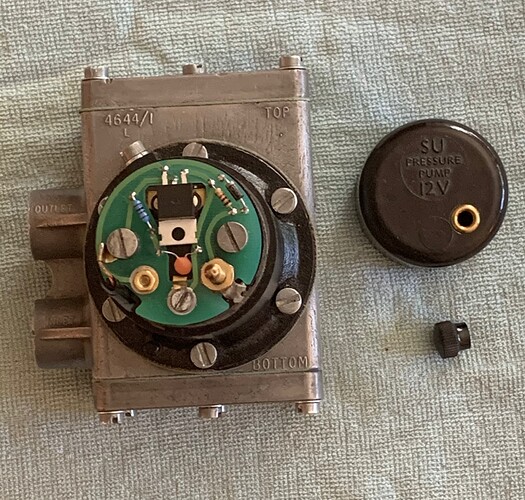 As someone else mentioned, getting the screws loose on these old pumps can be problematic. The white corrosion that forms between the aluminum body and steel screws seems mostly unaffected by penetrating oils. Don’t just twist the screws counter clockwise to remove them. Gently twist the screws back and forth, very slightly, using heat. If you’re lucky, they will break loose without breaking off.

By correct, I assume you mean period correct rather than will fit & work. Short answer is no.

As others have pointed out, the two leads from the end cap are not SU, and the coil itself looks wrong to me - there is no screw hole in the base for the ground connection. It is a short rather than long coil. I would be patient and wait for something better. Long and short coils are interchangeable though.

For a period correct XK120 you want a long coil. The end caps are either “smooth” (AUA.52), or “stepped” (AUA.152). The step is an extension to house a capacitor that was introduced to damp arcing in the points. I don’t know when the change took place, and these days the capacitors are replaced by smaller varistors that would, I guess, fit under the smooth cap. Both caps are available, so take you pick on look.

Here is comparison between long and short coils (you can see the capacitors): 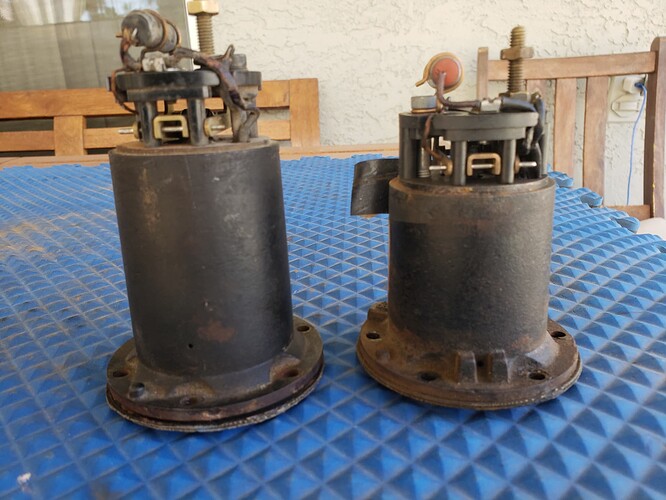 If you wanted to piece together something, or are not bothered about period correctness, there are these on ebay:

Another short coil. End plates are steel, which happened late on (around 1960?), not period correct for you, but claims to be rebuilt: Jaguar MK2 Mark II   SU Fuel pump rebuilt ready to install   very good condition | eBay.

Having re-read SU documents and Jaguar Spare Parts Catalogs I have come up with the following minutiae. Any errors are mine.

XK120 and a few early XK140 models used the AUA31 fuel pump, which became the AUA57 fuel pump with the introduction of twin contact points. Neither had the capacitor and so will be smooth capped.

The XK150 used the AUA52 fuel pump, which was same as the AUA57, but with the addition of the capacitor, and hence has a stepped cap.

Each of these pumps came with long coil housing. However, if they were SU rebuilt with the later short coil they would be renumbered as AUA157 and AUA152. I assume back in the 60s it was common to exchange pumps for rebuilt ones.

At some point the AUA52 was made with the short housing this was also coded AUA152.

Later, SU came up with a “barrier” diaphragm and the AUA went to AUB. Hence you will find AUB152 in Jag saloons made in the early 60s, until they were replaced by the AUF300 series.

The LCS pumps with the steel end plates are coded AUA80. I guess this was a cost saving and produced between AUA152 and AUF300s.

Interestingly, I find a listing of a 24 volt short coil LCS pump, AUA106, that may have two Lucar connections on the cap rather than be earthed via its body. I don’t know where this pump was used. So John’s eBay find could be one of these, although I still think it is not an SU coil and the cap is not marked SU.

Clive and everyone, thank you for this wealth of information on pumps. I agree that it’s best to have the correct (meaning XK120 correct) pump.

In any case, wouldn’t it be a good idea to fit a capacitor to the “smooth capped” pump?

The stepped cap had the step to accommodate the capacitor. However, rebuild kits no longer use a bulky capacitor but a small varistor that should fit under the smooth cap.

John, if your goal is an original looking XK120 pump installation, consider using the correct fuel line fittings instead of the banjo fittings found on most other British cars. These special fittings are available through Moss Motors. 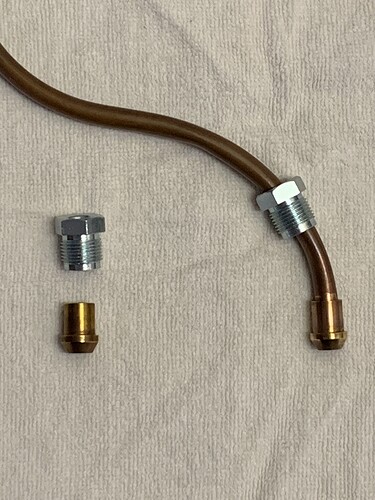 Mike, I agree, must have the original connections.

As luck would have it, a very good specimen is coming my way from Australia. I will be in touch about the rebuilding process, etc, once I get it. Thanks for everyone’s input.

I restored all my fuel lines a couple of years ago. 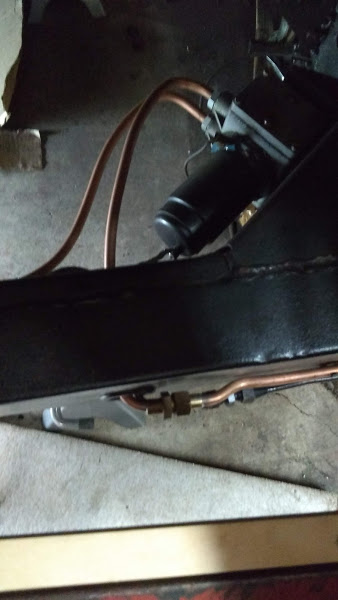 Rob, are they copper lines, or steel lines plated with copper?

All copper. Use ordinary plumbing solder, easy and works fine, same method as doing a house.

My fuel pump arrived today from a fellow forum member in Australia. It is in mint condition. I am going to take it apart and rebuild it and I wanted to know if the photos in Rob’s March 22 post is the original look for this pump. Thank you.

It is the original pump from my 1950 Mark V so I have no reason to doubt it’s authenticity.
(Shhh…The non-authentic transistor and diode are inside.)

I removed every screw from an LCS about a week ago,

a bimetallic reaction occurs the alloy body and long steel screws, there is 12 screws

I used the method described by a previous poster, a small butane torch applied to the screw head for about 2 minutes, then work it back and forth with a maximum estimated torque of 15-20ftlbs

any that failed to let go, I allowed them to cool, then used more heat, for longer, and included heating the alloy body section surrounding the thread

That got the remainder (about 1/3rd)

If you exert any more force than that, the screws will snap

I know this because I have a couple where that has happened, and you see a lot on ebay, seemingly with this fault

I very strongly advise the use of anti-seize

btw, does anyone happen to know the gauge of the screws ?