A few weeks ago, I purchased the Double SS dual exhaust from Moss Motors. Of course, these systems rarely fit up without some bending. This system needs a lot !! I eventually had to drive 2 hours to a specialist shop that would spend a great deal of time getting the 2 down pipes so that they would work. Forget the notion of getting the system and fitting it up in your home garage !
Now that its up, I can tell you it is loud. Its great for the mountain driving that I do most, but a long trip would wear me thin very quickly.
I now have another problem that has me puzzled. Since fitting the new exhaust, I now have a pretty severe vapor lock problem. A frequent drive I do is on mountain roads to a neighboring town to buy groceries. Time in the store is usually about 20 minutes, and when I go to restart, the car as for years had a slight vapor lock, where it runs a little rough for the first 20 seconds.
Now,… it bucks horribly for a longer time, and is much much worse !! I am wondering if perhaps the dual exhaust going under, and very close to the gas tank, isn’t heating the gas ? The single exhaust, of course, goes alongside the gas tank. The difference in how the car acted for the past 40 years with vapor lock, and now is dramatic ! Any thoughts on this ? Thank you in advance, Knight

I am wondering if perhaps the dual exhaust going under, and very close to the gas tank, isn’t heating the gas ?

Certainly is a good guess: if you can make some simple heat shields around the exhaust, or shield the tank with some reflective coating like DEI, that should answer your question.

Thanks Paul. I’ve decided to wrap the 2 tail pipe sections for the distance under the gas tank tray, plus 6" on either side. It may be a temporary measure to test the theory, or I might just keep it in place. After some research, I settled on a black titanium wrap ordered from Summit Racing. Since the malady occurred immediately after the dual install, I have to think it is a factor, and the exhaust goes nowhere near the fuel supply, except for the tank. Another possibility is that the car may be running hotter with the new exhaust. That sounds nuts, doesn’t it ? But the temperatures were about 10 degrees hotter on the gauge, than I am accustomed to. The car always runs cool, and did so on the drive, but it was the puttering around town, once I got there, when temperatures rose, of course. That always happens, but the range was greater, 85 - 90, instead of the usual 75-ish.
Thanks for your thoughts and concern. Stay well and Happy Motoring, Knight

It could be the exhaust has resulted in the engine running leaner, which can cause higher combustion temps: if, after you do the exhaust wrap–always change one parameter at a time–and that doesn’t provide enough/any improvement, then richen up the carbs two flats.

Does your car have the prescribed insulating blocks between the intake manifold and the carbs? 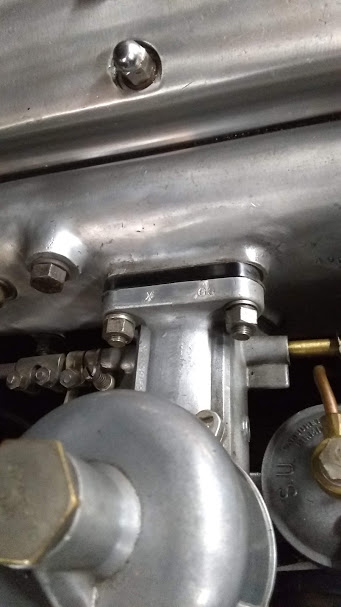 With respect Knight these mass produced exhaust systems are made with thin wall usually chinesium poor quality material.they have a nice appearance and thats it im afraid.
This thin wall material will cause the pipework to overheat and could lead to problems.

Dick and Rob, Yes, it has the insulating blocks. Thanks

Thanks Ian. When I mic-ed the walls, they are between 14 & 15 gauge SS steel. I didn’t think that was excessively thin, but I don’t have a point of reference. I can tell you that it certainly DOES NOT bend, or dent, easily !!
Stay well, k

Hi Peder, No, I don’t do short drives. My drives are lengthy but on twisty, turning, very fun mountain roads from town to town. I have not driven a highway for any length of time, in a few months and that is an unusual case, while I drive my XK 4 or 5 times a week. The old systame that was on my car for 40 years was a staionless system that I bought out of England, ( Crow Engineering long since out of business. I have to very respectfully disagree ! 40 years of daily driving, which includes rallies, with no significant engine problems with a stainless system, is hard to beat. We have 4 XK120s, each with SS systems, but my brother bought a DHC a few years back with a dual system and I’ve always envied the sound. My previous SS system was a single exhaust. Thanks Knight

Never had a problem with stainless exhausts, and I’ve had quite a number of them over the years. What I like is, you can always get them off easily and you don’t get bits of rust dropping in your eyes when you’re under the car! I do admit that mild steel systems probably produce a more mellow sound. After all, many new quality cars these days come with stainless systems from new. My 1990s Bentley Turbo did, and it’s still fine. How many mild steel systems would it have gone through since 1994, I wonder…?

I agree, Chris. 40 years of a SS exhaust on an XK120 that does a lot of miles each year, is pretty remarkable. And when I recently removed it, it came down pretty easily, and now rest in my rafters. I could, if I was so inclined, polish it back to a new finish !
Interestingly, my brother’s dual system is exactly as mine (Double SS), but unexplainably, his 2 downpipes are mild steel with everything else stainless ! His exhaust is mellower and not as loud. Cheers, K

Having operated in some VERY hot weather with overheated XK120’s, I am much more suspicious of temperature-related ignition malfunctions than of vaporlock. (I can’t believe that your new exhaust system is responsible for the problem.)
If you’re still convinced of vaporlock, even though the gas caps don’t fit very tightly, you might assure venting the tank by leaving the filler door ajar while you’re in the store.
You might also check that the carb overflow pipes have proper serrated washers on the underside of their fittings.
Does the fuel pump sound as though it’s stroking normally/slowly when you re-start the car or is it stroking rapidly?
Good luck.

Thanks Dick, The fuel pumps sound normal when trying to restart. It is definitely a vapor lock, as I have a glass filter just before the carbs, and when I had the problem, it was showing empty, even though the tank is full and pump working well. A little cooling time, and the filter filled up, car started and ran very rough.
All the best, Knight

Glass inline filter showing empty is not vapor lock, it’s fuel starvation. It is the filter inside the pump clogged or the pickup tube inside the tank blocked by sediment in the drain plug. That happened to me, the sediment was like powdered sugar, fine enough to get past the screen and fill the drain plug but was not getting drawn up to the pump internal filter.

Here’s another possibility. I agree with Rob that fuel starvation is more likely than vapor lock.
It appears that, not long after the fuel pump is shut off, the fuel to the carbs is either sucked or drained away.
If the tank is venting properly, it’s unlikely that the fuel is being sucked back.

If you have a standard SU fuel pump it’s possible that the outlet disc-type check valve is either stuck open or even missing. This would allow fuel (beyond the pump, leading to the carbs) to drain back, to the level of the fuel in the tank, whenever the pump is shut off. When a re-start is attempted, a lot of air in the fuel line has to be displaced.
The attached pictures show a valve of the type involved.
I’m done. 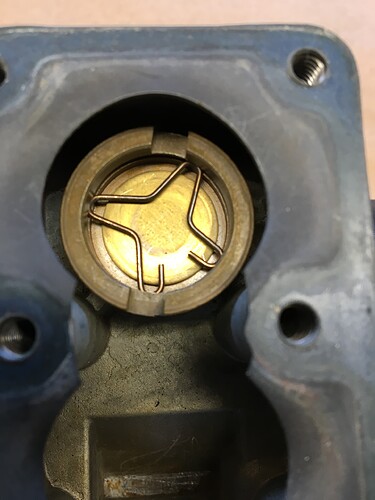 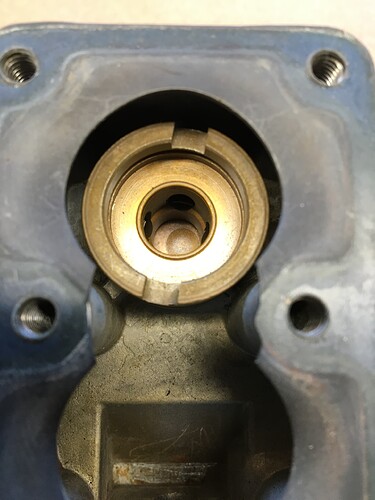 In my experience, changing exhaust back pressure can change your AFR by a meaningful amount.

I have a dual SE exhaust and have never experienced ‘hot’ fuel in the gas tank causing rough running. But, I also don’t drive my xk when temps go over 100f, and I don’t let the gas go below a quarter tank.

I am curious, since there are a lot of postings of folks saying that their “new” dual exhaust is too loud.
Has anyone attempted to quiet, or mitigate the loud volume of the their exhaust ? If so, what methods and with any success ?
There are restrictors, baffles, etc. but not much for 2". All start at 3".
Even for a roadster, my Dual SS system is too loud. The take bark is kind of exciting, but the drone at 1800 rpm, again at 3000, gets very annoying. Cheers and stay well, Knight