I am about to refit the body to my 140.
Fuel & brake lines, exhaust, clutch release cross shaft, heater pipe on RHS of cylinder block all fitted. Any tips as to anything else that should be fitted prior to mounting the body?
I am going to fit the lower steering column tomorrow.
I have access to a two post lift.
Hopefully will run the engine tomorrow before the body is fitted.
Hopefully I have orientated all the hose clips so they will be accessible!
Thank you. 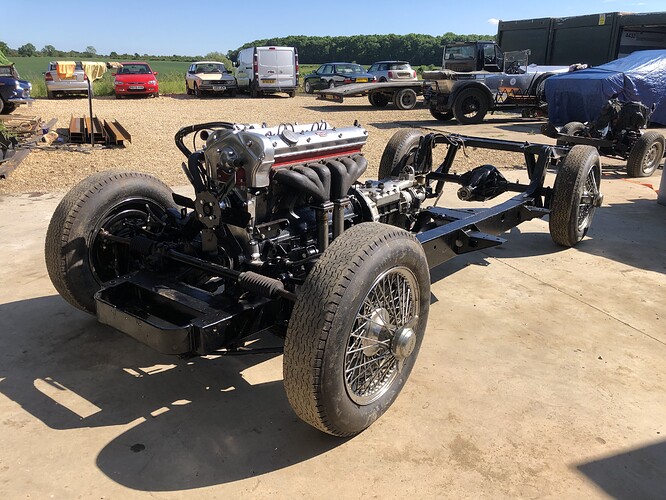 Check out Classic Car Cave on YouTube.
Dave has a video that details this exact thing.

I did this recently and it was not as horrifying as I had feared. Based on your photo, I would install the gas tank, drive shaft, pedal and clutch pedals (not the stems), and the generator. All can be put on later, but it would be easier with the body off. I took the mufflers and tail pipes off to mount the body, but in hindsight I could have left them on if the heat shields were installed on the body first. There is a wiring harness which runs from the fuel sender, across the frame over the differential and down through the chassis rail to the fuel pump and forward near where the battery box will be mounted. It is easier to put this in before the body goes on. Also, be sure the lever coming up from the hand brake mechanism is threaded through the small slot in the floor when you drop the body. It is easy to overlook. The front bull horns or fender supports (without the cross bar) will need to be installed loosely to support the front fenders. According to XK 140 Explored, there are four red spacers ( 2 X layers of 2) under each side. And, as I just learned, there are two angle brackets which attach to the right bull horn that provide the front mounting points for the distributor shield. Make sure the vertical support pieces (V shaped with holes) near the front of the engine bay are lowered on the correct side of the chassis attachment points.

The placement of the aluminum and the red fiber spacers has been described elsewhere in JL in detail. If you have not modified the body significantly, the original setup should get you close. If the body has been modified, then you will have to experiment. Ultimately, you want the the doors and hood to fit correctly. The boot lid is less affected by the body mounting points.

Finally, there are two balance pieces which should go on your fan that are missing. Hopefully, they are hiding out in your parts bin. Good luck.

I am trying to determine whether or not it is even possible to mount the body onto the chassis, when the pictured BD.8428 Mounting Plate Assembly is already attached to either the body or to the chassis. 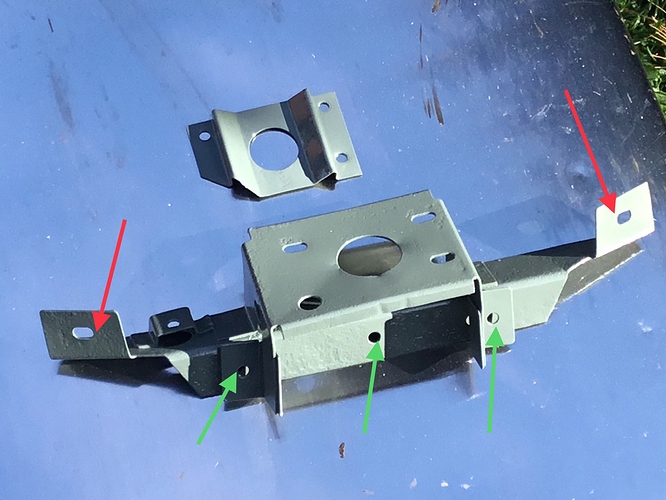 The reason for this is, to try to determine whether the fasteners passing through the holes (indicated by the red arrows) into the body should be painted body colour or not painted at all.
I’m thinking that if the mounting plate assembly is not attached to the body at the time when the body is mounted to the chassis, those fasteners would not be painted. Hopefully this makes sense.
Or does anyone know if those fasteners are painted body colour or not ? Thank you.

Thanks for your reply. I haven’t put the drive shaft on as we are going to test the over drive function & oil pressure hopefully today. Which side of the chassis brackets do the V shaped pieces go? I am going to fit the brake pedal after as it needs altering for what is now a RHD car. I was not aware of heat shields, another thing that is missing! Will look into that.
Can BD 8428 be fitted after as it is still at the paint shop? Should this be body colour or black? I will check XK140 explored for this info.
I have had the body on before but this was a trial fit to check doors & bonnet/hood and I have all the spacers laid out in a special box!
I have balanced the fan on a balancer and used washers as the plates were missing. Also realised yesterday the fan cowl is missing.
I will never buy another part restored car!

Thanks I will look for the video.

Hi Charles,
I haven’t ever removed/reinstalled the body of my ‘56, but a while ago I did manage to remove, paint, and reinstall the BD.8428 mounting plate assembly, on this particular vehicle anyway.
The fasteners were difficult to reach, but it was possible to remove and replace it with the body still on the chassis.

Which side of the chassis brackets do the V shaped pieces go?

The V shaped supports on the body go inside (toward the engine) from the chassis brackets. You can put heat shields on after the body is on, but the mufflers would have to be off. I believe you can buy replacements from the usual vendors, but I fabricated my own from an aluminum sheet and wood stove insulation purchased on Amazon.

I believe we installed BD 8428 after the body was on. In hindsight, I wish I had powder coated it first. It would be hard to paint everywhere needed to protect it once on the car and it immediately gets beat up by the hood safety latch so something more robust than paint seems indicated.