Attempting to photograph my rear brake linkage, I noticed something odd.
So today I took out the fuel tank, and here’s what I found. 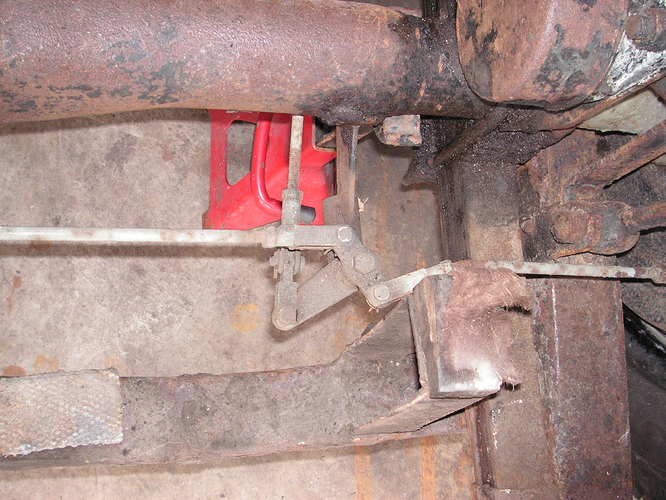 I’m pretty sure the brake rods aren’t supposed to be bent and dragging on the gas tank supports. 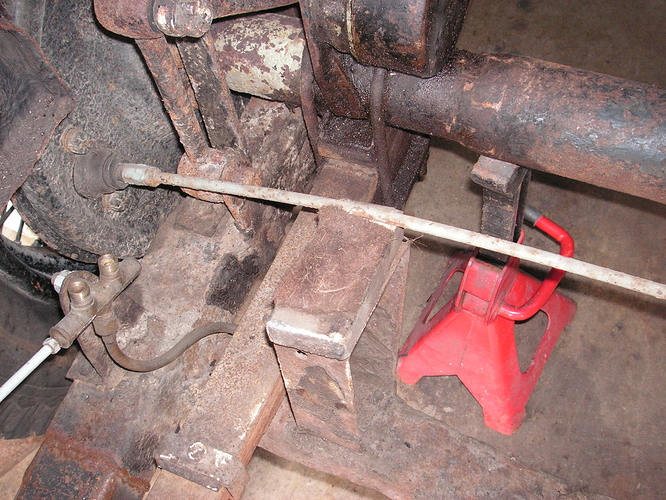 So it looks to me like the front support hit a rock or sewer cover or something, and bent it rearwards at the bottom, which moved the gas tank supports forward. It looks sort of rotated or twisted where it is welded to the side rails. 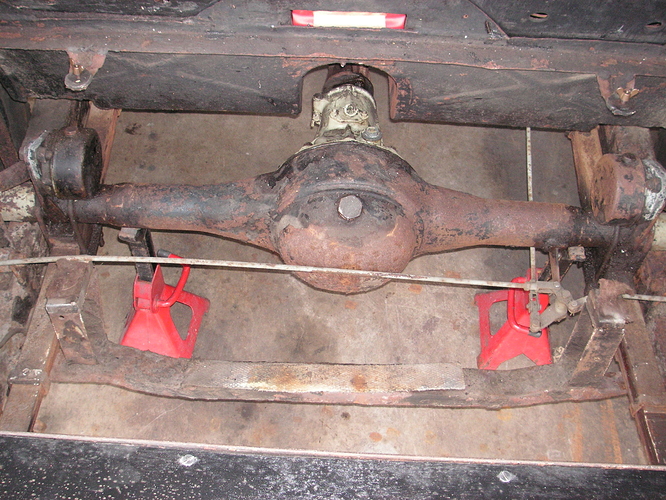 My question for today is, should this cross bar be at 90 degrees to the main chassis side rails, i.e. not rotated?

Your pull rod from the pedal is on the wrong side of the bell crank pivot. 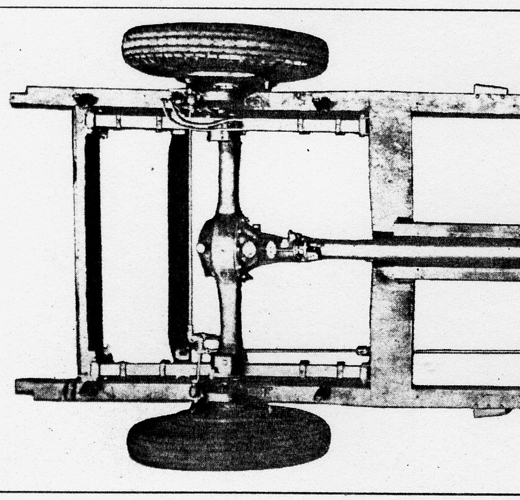 Having said that… I just had look under my car and it doesn’t correspond with the image I posted either.
I can’t recall having a problem on the off side but I know that I don’t have much clearance between the tank strap and the long pull rod to the near side. 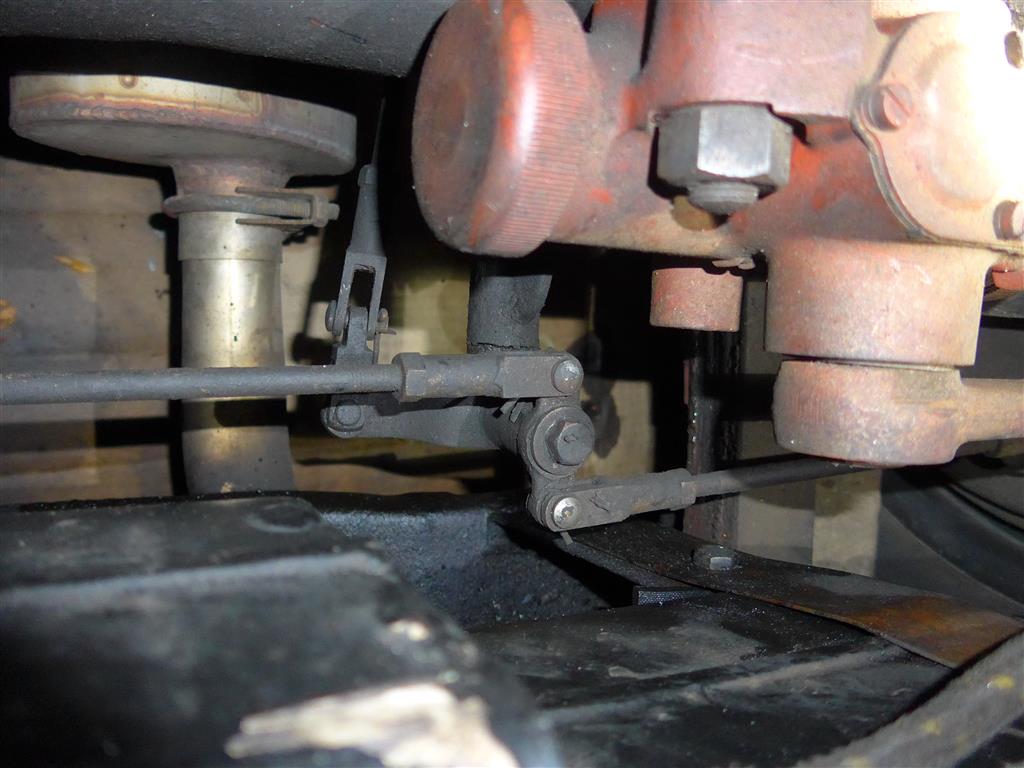 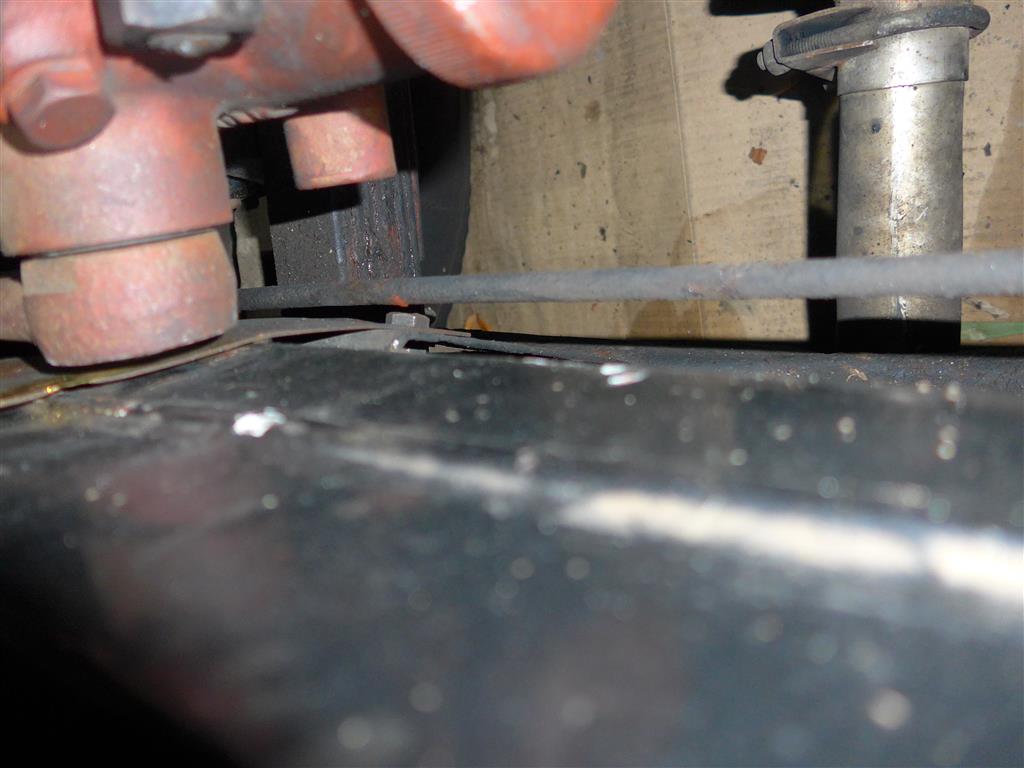 Ill get some photos of mine tomorrow to compare.
Yes I would say with all certainty that the cross bar should be at 90 deg and not rotated.
Regards, Graham

It should be at 90 degrees when brakes are fully applied.

But certainly never go over 90 deg. Alwas better coming up to 90 than exactly on it. I find that it always helps to remove the cotter pins ad pull the rods against the springs resistance on the shoes and see if the rods can be shortened
Gets a better pedal and more bite.

Thanks, friends, but my question may have not been clear.

I understand how to set up the brake linkage, and Peter is quite right that my bell crank is on upside down and the forward rod should be in line with the pedal and parallel to the frame. It currently takes a bend at the intermediate chassis frame cross member. Thanks for pointing that out. Perhaps we can lay the blame on the DPO who went happy with pale green paint. 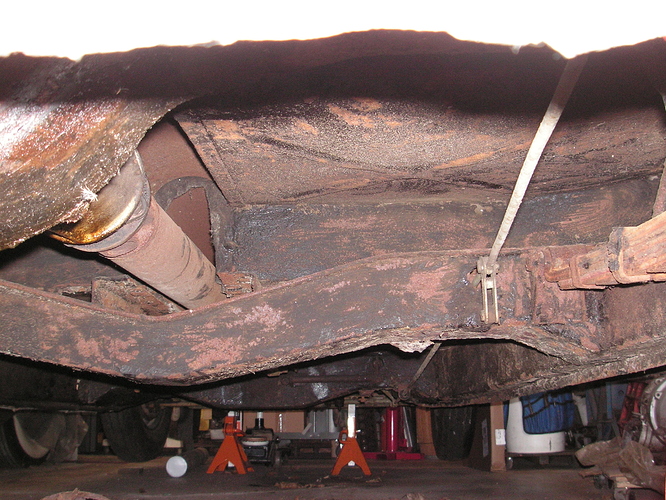 I was alluding to the bent support for the spare tire and fuel tank. 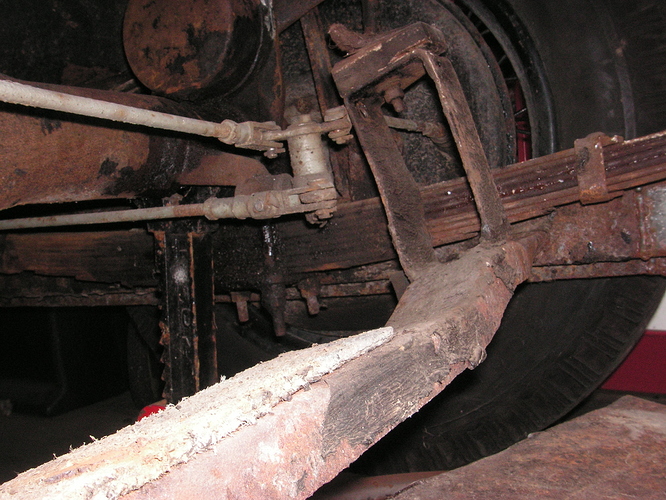 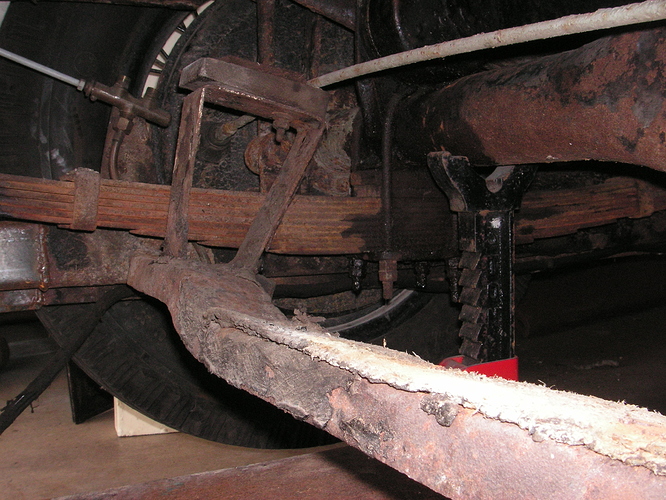 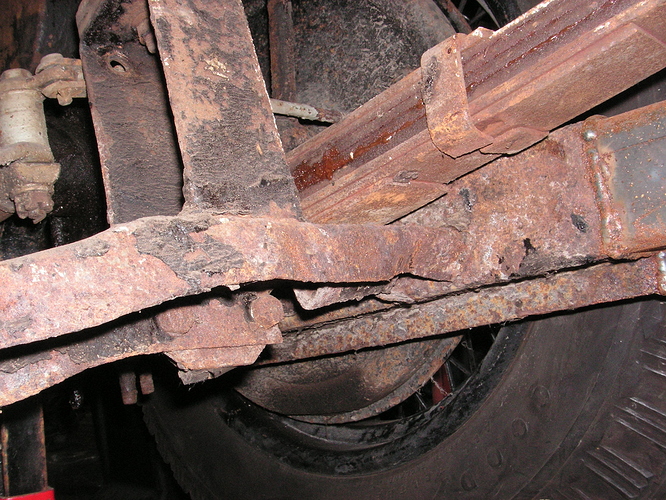 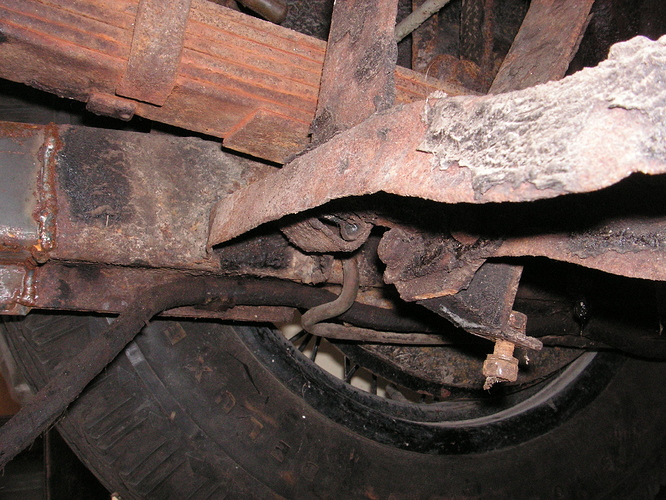 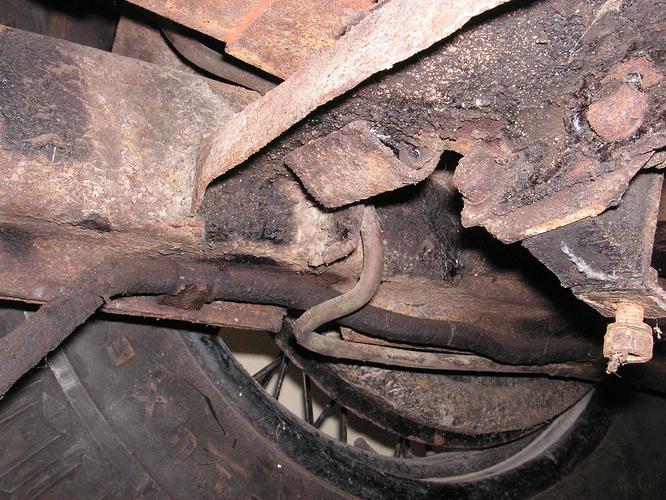 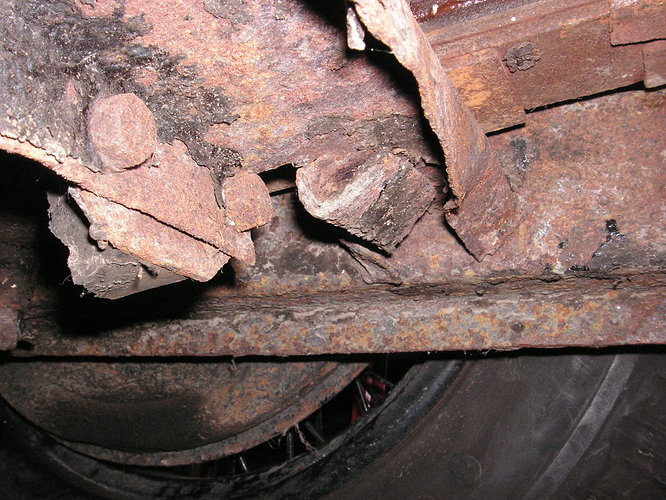 It looks like I will have to remove this thing to straighten it, and then weld it back on. Should this cross bar be parallel to the main chassis, or slightly rotated one way or the other?

The image of the rear of the chassis that I first posted comes from an article in “The Automobile” Oct. 1937. I think the pull rod from the front was probably as per this photo but I’m pretty sure they must have changed the design so as to permit a longer bell crank on the compensator. With your’s being an early car it’s difficult to say which arrangement is correct.

It looks to me as if your car has the same (longer) bell crank as my car. I suspect that if you try rotating it so that the pull rod from the front is on the other side of the bell crank pivot then the longer arm will foul on the road spring.

It’s difficult to say from your photos but it looks to me as if the cross member to which the petrol tank supports are attached is canted forwards which might explain the apparent fouling of the across the car brake rods. I think my cross member is level on top and the tank supports have more vertical front faces.

The crank is not on upside down - just needs rotating about 120 degrees. But only if this is the root of the problem.

All rods for mechanical brakes must be straight from end to end and not contacting anything between. Turning the crank to the outboard side should correctly align the RH wheel rod, as it then attaches to the forward arm (which is the same arm as it is currently attached). This can also be visually checked as the rods should enter the back plate very close to 90 degrees and this is easily checked on the side with the shortest rod - the RH side. however much less noticeable on the left. (In fact it will cause an increased drag past the questionable stool.)

From the photos, the LH rod has a separate serious problem as noted, by fouling the support stool, such that it appears the rod must pass through the stool, but of course that cannot be right. There is definitely a problem with this stool at least, but both stools need thorough checking, as they don’t match in all aspects and both may be bodgies.

Ed’s comment is important…that the bell crank should never go past 90 degrees at full force braking, but just up to. The 90 degrees gives the maximum pull-on force in the rods. To give an idea of this, yours Rob, seems like it would not get close to the 90 degrees on full brake and yours, Peter, should be near the position at full pedal force, so this looks wrong if it is in the at-rest position.The bell crank should have an at-rest set back from the 90 degree position for initial set-up; for the Mk IV this is 1-1/4" max to 1-1/8" min. The front axle is a bit different at 1" max, 7/8" min.

The Mk IV bell crank inboard orientation is the same as in your pictures so was there a change from outboard in pre-war to inboard for post-war? Maybe not.

Just as an enquiry, is there a supplier for the special stepped and threaded clevis pins used on Mk IVs? Or do I have to make them? I am assisting a friend and his is full of standard pins and Whitworth set screws!!! Terrible and dangerous.

Yes, as soon as I disconnected the forward rod I realized that, the bell crank was just turned the wrong way.

I managed to straighten the bent spare tire support cross channel with channel locks and crescent wrenches, a very flimsy design in my opinion, but there are some places I will need to weld tomorrow.

Then I removed the bent RR brake rod; all the split pins, clevis pins and threaded parts loosened without any undue tantrums. I sandblasted it, chucked it up in the lathe and bent it back to straight within .010" and the threads are all still good. Painted and back on the car and all is good. The LR rod was only slightly bent and I straightened it without removing it. The forward rod is now parallel to the chassis frame, and there is enough clearance to everything so the rods won’t rub or catch on anything. 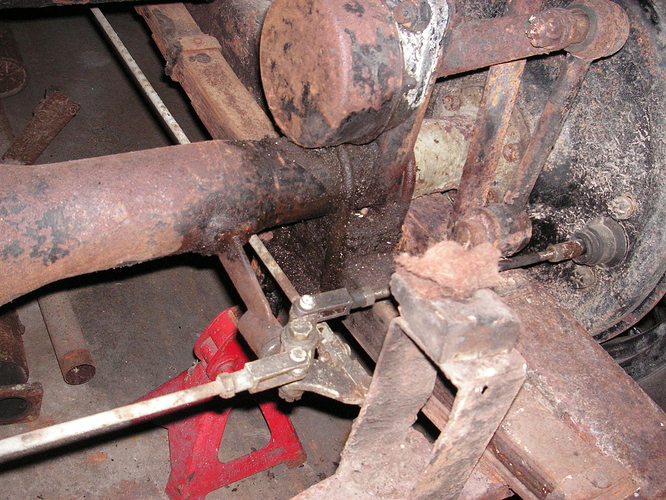 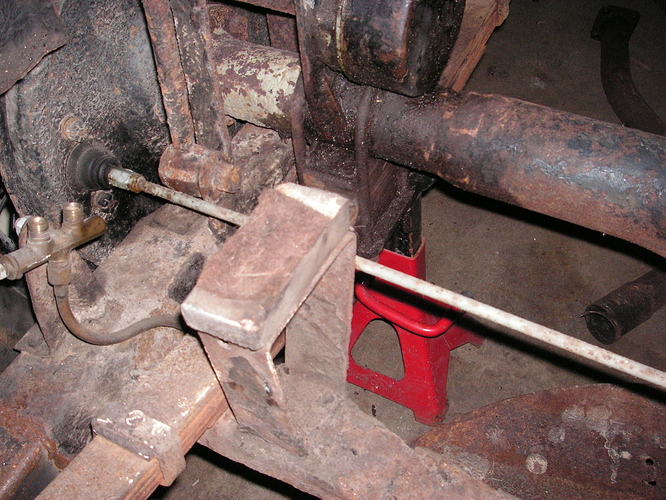 Pekka was right, this is good therapy for my troubles.

A stepped and threaded clevis pin sounds like a description of what we call a shoulder bolt.

Just as an enquiry, is there a supplier for the special stepped and threaded clevis pins used on Mk IVs? Or do I have to make them? I am assisting a friend and his is full of standard pins and Whitworth set screws!!! Terrible and dangerous.

Yes a largish batch was made here a while ago. I spoke to Ian , who had them done and he may have a set still, He’ll look .He said you could also try Simon Whitworth as Simon bought some sets off Ian at the time.
These were for later MkIVs, the early cars [ and SSs] had plain clevis pins , 1/4" which I buy from boating supplies in stainless steel.

PS . when the factory installed them it was before the body went on the chassis. With everything in place you may have an interesting time getting the rear ones in.

Thanks Ed., any help appreciated. I need to change all on my friend’s car and worn ones on one of mine. Two car sets would be great if available. Several years ago I tried for these with Cordell in the US and Wally in Jo’burg to no avail but I can’t remember if I checked with Simon.

I know what you mean about the rear ones. There is almost no working space in there. The spanner flats on the clevis heads are a big advantage.

This is mine set up and clears everything easily 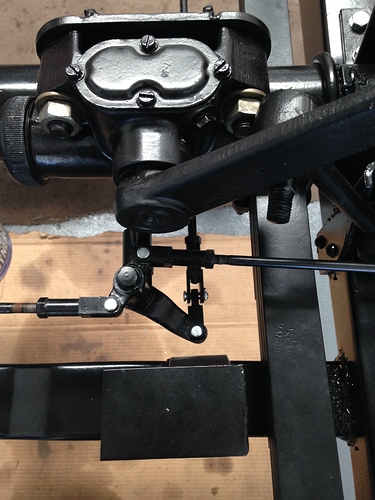 What month and year did your car leave the factory?

Thanks Graham, Your photo corresponds with “The Automobile” photo and made me question the configuration in my January 1939 car. But I also have this poor copy of a factory drawing. In detail it looks wrong because the rods to the wheels are on the wrong arms of the compensator (and would push them rather than pull them) but I suspect that the drawing started life with your configuration and was modified (badly). This would also explain why the arm to the pull rod from the front is at totally the wrong angle but would be correct if it had simply been redrawn 180 degrees removed. 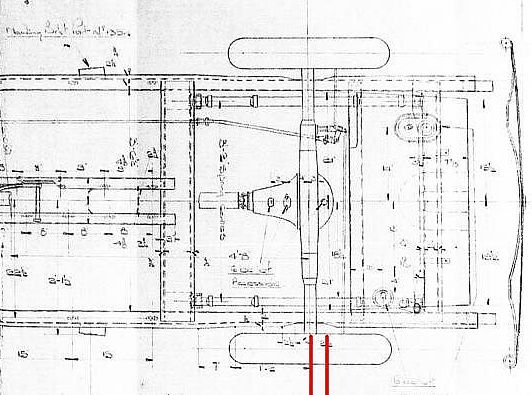 Very interesting drawing. Any chance of scanning the whole thing?

From my 40 years in engineering, working with draftsmen, I can tell you that a mistake such as that is very possible. The main purpose of that drawing appears to be chassis frame configuration, to lay out dimensions for all the holes in the chassis. The drafter may or may not have been familiar with the working of the braking system, but for this drawing that was not his main consideration. He may have measured up a chassis in the shop that had brake parts dangling loose and made a guess as to their proper orientation, wrongly as it turned out.

My left side rod is also very close to the tank support, which is different from Graham’s. Perhaps I need to bend the support some more rearwards.

I don’t have the original document and I took some pictures of it behind glass with bad reflections so it is pieced together from a couple of different views. I don’t think the draftsman had got it wrong originally. I’m pretty sure, from the angle of the compensator and the way the rods are connected, that the error took place because the rod from the front was moved and the drawing updated (but without thought to the effect on the angle and cross rod connections).

You can see it here where I was comparing it with the MG SA.

In the MkIV the rod from the front also couples to the bell crank inboards.
g 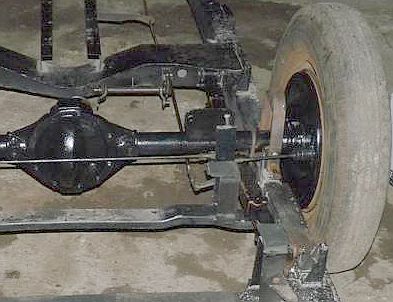 Whilst looking for views of wiring looms for Graham I came across this frame from video of the 1939 unrestored Swiss car showing the brake rod in the later modified position, 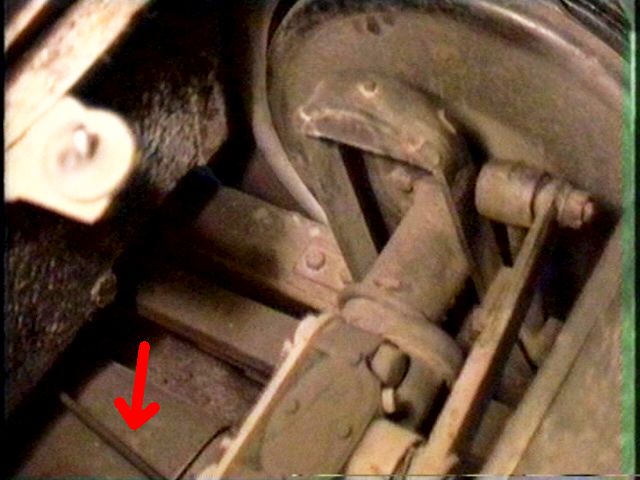 Here is a better shot of my brake rods, the front and rear rods more or less in line now that I turned the bell crank connections. 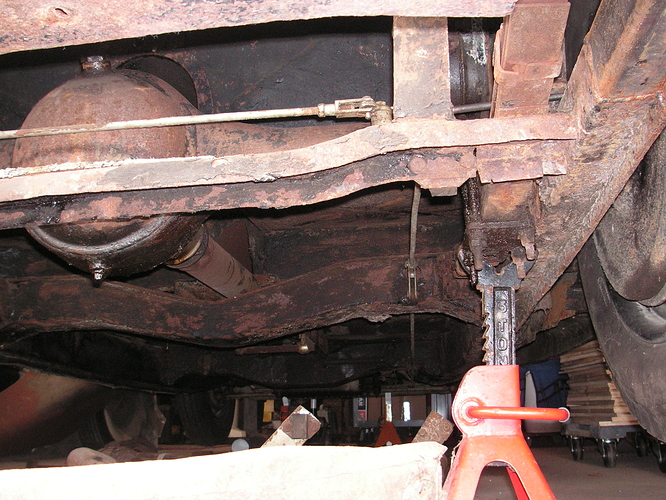 I see the layout of the rods was changed for the Mark IV. Perhaps related to the change of type of shock absorbers? Parking brake cross bar also different. Is there a hole through the chassis to the right of that rod? A leftover from the previous layout?
Perhaps some DPO of my car took the rods off to paint them green, and was copying the scheme of a Mark IV when he put the rods back on wrong.

Very interesting about the MG SA. Bill Heynes must have studied it a bit, as the floating pancake oil pickup and oil level sender were used in the XK120 and Mark VII engines.

Back to the gas tank supports; I have discovered that the rear support cross bar is also bent, due to the weight of the car on the rear springs and poor attachment to the side frame rails by whoever started the restoration of the rear chassis area.