I’m just starting into a rebuild of a 61 ish MkII 3.8l motor. Been years since I did my last 3.8. It had a rope seal as I best recall, this one doesn’t - it has the original snail style. Does anybody know if the rope seal assembly off a 4.2l engine is a fit? I’m aware of the availability of the newest lip seals but I’ve spent the last 40 years with rope seals and I’m comfortable dealing with them.

Terry, you may or may not be aware that there is a rear main seal available from Rob Beere that is a one piece stretch on seal that fits in the stock housing. If it interests you go to the e type uk forum and search Rob Beere rear main seal. It looks to me like a much superior method but I suspect a consultation with Rob Beere would be needed to find out if it would be applicable to your situation.

Hi Terry,
AFAIK the 3.8 seal and the 4.2 seals are the same. The asbestos/rope seal was fitted to E type engines R2564 and subs. As you might suspect I have a number of them floating around my shop and they all appear the same, except for the XK 120 one I have which has no groove for the rope and is completely flat instead. If I get time tomorrow I’ll try a 4.2 seal holder on the 3.8 crank I have out.
Cheers

Terry the return scroll on the ‘61 crank is coarser than the later cranks, consider that, if fitted, the scroll will “chew” the rope seal ! The rear housing, if correct for a ‘61, doesn’t have a grove for the rope seal,same as the earlier 120 engine mentioned
A ‘61 will have a steel sump so if you go with a rope seal a rear housing with a grove to accept a rubber, or cork if you’re desperate !

rear sump seal is required. If a Ali sump is fitted then parts will have been changed.
Although expensive, the Rob Beere method, on the face of it, seems
“way to go”. If you stick with the steel sump you will need the less common rear housing with a grove for both rope and rubber / cork seals.

just been through something similar. PeterJB is correct (as always) but I would add that if you change from steel to Ali sump you have to change the suction pipe to the oil pump pipe as the ones in the Ali sump have an offset to avoid a strengthening pice in the sump. The later Ali sump pick up pipe was also a different diameter on the suction side to connect to the revised higher flow oil pump. One last thing it is my understanding/recollection that the steel sump has the grove for the rear seal gasket (cork or rubber) and that there is no grove in the rear main seal cap. the Ali sump has the groove in the rear main carrier . 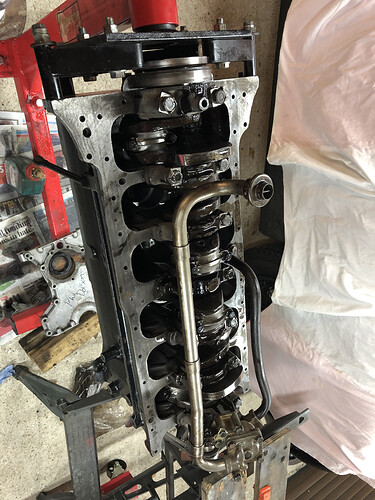 Hello Phil
Wrong way round, ali sump grove , steel sump not ,MK2 that is !
A 61 MK2 did not have a rope seal, but around 62 this was introduced but still with a steel sump . The seal housing then changed to C19650 bottom half and C19649 top half, with the introduction of the ali sump the bottom half changed to C19688.
Early E type no grove in sump, later E grove.

I’d like to hear from users who actually have some miles on the Beere seal. I’m using the Terry’s lip seal kit, which utilizes a Federal Mogul Viton seal as used in millions of GM engines… Zero leaks. What’s the real world application history of the Beere seal? Not saying it isn’t the best ever, but …

This engine has a tin oil pan, and that is grooved to accept an oil seal strip. That got chucked, don’t recall what it was made of. I get the drift here that a later E Type rope seal conversion would work for the block, but may not be compatible with the scroll on the crank, and also may not fit the tin oil pan?

The Beere seal conversion seems, from the photo on his site, to be a very large seal which works on the outside of the flange, and not on the portion of the journal by the scroll. That would imply the flange is cut down. Part of the flywheel centering on a stock car is a tight fit of the flywheel around the flange (plus 2 dowels) - that would be eliminated here I think. He sells a kit for this that includes a new flywheel - hmm.

I think there’s a new Beere design, where the seal actually stretches over the large flange, and then returns to a much smaller size, and rides in a more typical location.

I think that the Rob Beere stretch seal that is being referred to is not the one you describe. There was a thread about it a while ago, that implied that it is a new product not yet on their web site, in addition to the one you referred to. Here’s the thread:

That’s what I meant to say Erica, whereas what I wrote was not clear enough and the core message went ‘Tango Uniform’

It re-directs you to the UK E-Type web site for details.

This is the seal shown on his site today:http://www.rob-beere-racing.co.uk/pictures/alulip001.jpg

I might add I’m not contemplating this - at least not yet. would prefer the cheapo rope seal.

This is the seal shown on his site today

I believe that is the seal they’ve been selling for many years that involves turning down the crankshaft flange, drilling blind holes into the end of the crank, and fitting a custom flywheel. A pretty radical solution. If you want to see the one piece stretch seal, the UK Forum link is the best info I’ve seen.

Hi Mike I’d appreciate that. Unfortunately my E mail is not working, a Telus issue, hopefully it will be fixed shortly.

Hi Terry, rooting around the basement I found 2 and a half rope seal covers (if needed I can dig up an early non-rope one I think). One is from a very early 3.8 E type engine, R3611-9, and the other is 4.2 as is the half.
The top halves of both are stamped C 19649 and WYF J3781 . the bottom of the 4.2 one is C19888…could be 19688 as suggested above the numbers are deep in the casting and seem to be getting smaller as the years pass. The surface where the sump seal rests on is flat/smooth. Bottom half of the 3.8 cover is stamped C19650 and it has a groove for the sump seal.
THe early 3.8 parts book shows C 19648 for the cover (both halves, there’s no separate p/n for each half). The 4.2 book shows C19687, again for the “cover”, both halves no separate p/n for top and bottom.
Interestingly the asbestos seal has the same p/n C19654 for both 3.8 and 4.2 E type applications so the change may be due to oil pan seal changes.
The bottom half I found in with my XJ6 parts has C 19888 (or 19688, can’t tell on it either) top half has wandered away. It is flat/smooth as well. So I think the rope seal covers are interchangeable 3.8 to 4.2 assuming the crank is scrolled correctly for it. The sump and how it seals is another matter.
Cheers, Mike

I found my old Mk II parts manual from 35 years ago, when I restored one. The rope seal was introduced at KH2794 and LB8247 engines (3.8l engines), Coincident to this a new crankshaft was also introduced at these numbers, going from p/n C4808/1 to C18350/1. The engine I’m working on is LB2721… As bore/stroke/cylinder spacing etc didn’t change I have to conclude the changes were to the oil seal area as Peter suggests. Well so much for that idea.

Here’s the instructions and images of Rob’s new 1 piece seal.Expensive? for what it is,but works out pretty much the same as any conversion kit.

I would be very surprised it that seal was specifically made for Rob Beer Racing. It probably is mass produced for some industrial or automotive application and is likely quite reasonably priced if you just knew where to buy it.