I put the 90 XJS away for the winter over a month ago but I had to do an unplanned move to access one of my snowmobiles.
The temp was -12c/10f and suprisingly it started right up and idled just like it does in summer temperatures. There is a block heater on our XJS but I did not have it plugged in. I have been using Liqui Moly10W60 full synthetic oil for a few years now and I think it helped it crank and start so easily. 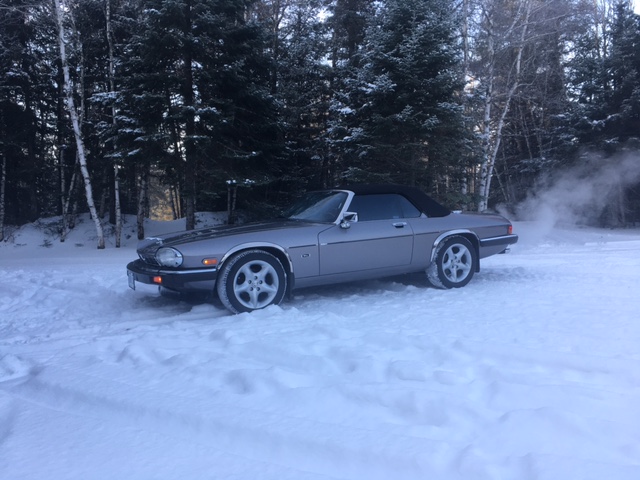 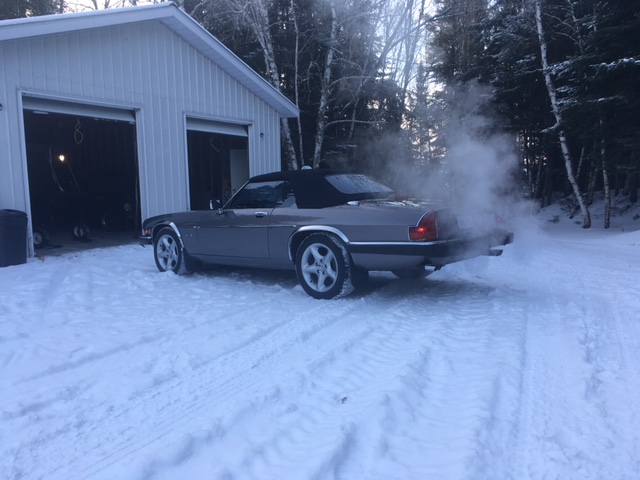 Be careful, with that low air dam, your XJ-S will become A Rare Snow Plow!

LOL…lucky its only goin back in the garage until spring

I was thinking of taking mine out just to start ip and fill up the gas tank. I must admit I got lazy and it does not like to drive in the snow. I can’t believe that back in the good ole days we used to drive rear wheel drive cars all the time. I can’t help but think when I drive the XJ-S in snow and ice I’m taking my life in my own hands.

I can’t help but think when I drive the XJ-S in snow and ice I’m taking my life in my own hands.

As opposed to FWD cars where you put your life in the hands of fate? Unless you get stuck snow is much more fun with RWD if you can drive.

Decades ago (about 1983) I was doing aircraft accident investigations and our team was dispatched to Alaska in Oct. Snow was about waist deep except the roadways had been kept drivable clean. Packed down snow about 2 inches or do on a somewhat deserted roadway and we had a FWD rental car. Decided to see how well it could track. Our “driver” could not get it to skid out or fishtail at the posted speed. Was probably about 35 mph.
I have driven and have ridden RWD in snow and ice in many states, Germany, and Korea. Got to admit I thought that FWD Chevy we had in Alaska that night was good to have in those conditions.
I wonder sometimes about the current trend to have all wheel drive…sounds like increased maintenance and repair.

AWD is brilliant in the snow!

First FWD car I tried in the snow was terrifying. Not only that, but I only drove that because my buddy couldn’t believe I was going faster with my RWD car and even enjoyed it…

I hate understeer. With RWD you just steer with the throttle and with good tyres you have grip. Limited slip helps but I don’t have that yet.

Blizzards of '76-77 were fun. Roads hard packed with snow on a four lane thru a small town, wee hours.

Center car and speed up to edge of grip, about 100 mph down the hill. Floor it, tire spin as you turn a hard left.

Best my 73 Monte Carlo could muster was five revolutions. My friend’s Fairlane got seven. Ah to young, stupid, and cheating death.

I can’t believe that back in the good ole days we used to drive rear wheel drive cars all the time.

I have driven both RWD and FWD cars, tens of thousands of miles, in the snow, all my life. It is my considered opinion that FWD isn’t all that much better in snow than RWD. I haven’t had a snow tire mounted on a car for over 45 years.

If it gets bad enough to where I need that, I just stay home! My wife’s Subaru is AWD, with Michelin Defenders, and it never has an issue in all but the deepest of snows. 99% of the time, it does just fine.

I actually prefer FWD in the snow. I like how you simply steer the direction you want to go, and the front wheels pull you that way. The rear just comes along for the ride.

RWD is way too difficult with steering up front and power in the back.

I think a lot of this is what you grew up with…by the time i was driving in snow, almost all cars were FWD.

RWD is way too difficult with steering up front and power in the back.

Never had an issue… I think the whole hoo haw about the superiority of FWD is just that.

Well, I guess I grew up in the age of RWD. I still prefer it. I will trade RWD in the snow with oversteer to torque steer any day. As far as steering in the direction you want to go, what happens when that doesn’t work anymore and you get understeer? No way to pull out of that.

I do like AWD. I haven’t seen extra maintenance for it. AWD and antilock brakes with traction control are a different world from the '76 Olds Cutlass I learned to drive in.

I agree, RWD gives a lot more control, but ONLY if you know how to use it. Otherwise, it’s too easy to swing the rear around. My XJS is first RWD car since my mid 20s. I am so bad at RWD that I’m even nervous driving in the rain. I should probably go find a huge wet parking lot and teach myself.

At the end of the day, once you break friction with the surface on which you are driving it kinda becomes academic.
IMHO

Once a year when there is snow i go to practice ina parking lot. I grew up with BMWs and Mercedes and feel much safer in them.
Greg with that XJS you have you should really do some drifting in the wet. It’s fun! And it really helps when it happens and you’re not prepared.

No, with FWD you suddenly go straight ahead completely out of control, and with RWD you can steer with the throttle and the front wheels can concentrate on the steering.

I have driven both RWD and FWD cars, tens of thousands of miles, in the snow, all my life. It is my considered opinion that FWD isn’t all that much better in snow than RWD.

I had an Austin 1800 for many years and drove it year round. With RWD, the driver had control over front and rear. The steering wheel controlled the front and the gas peddle controlled the rear. With FWD, the only control was over the front wheels and when they let go, you were along for the ride. You did have to go a lot farther into stupid territory with FWD, but when you did loose traction there was nothing left and you had to ride it out.

At the end of the day, once you break friction with the surface on which you are driving it kinda becomes academic.

I could not disagree more. My first car was an MG Midget. I could do square corners with it on snow and ice. Give the wheel a quarter turn, blip the throttle, get the rear end swinging, at 90 degrees, counter steer and give it gas: Result a 90 degree turn and accelerating straight ahead while throwing up rooster tails. My second car was an Austin 1800 and didn’t have the handling of the MG. When you got into trouble with it, you didn’t get out until you slid to a stop.

You did have to go a lot farther into stupid territory with FWD, but when you did loose traction there was nothing left and you had to ride it out.

All RWD cars I’ve owned before were really one wheel drive. No limited slip.

With my XJS and limited slip diff, I’ve been enjoying the push of both wheels on dry pavement, instead of one tire spinning and one tire ‘parked’.

I agree, will probably be very fun with limited slip?

On a tangent, I’ve also noticed since i switched from 90W to 140W oil in the diff, the limited slip is even better. Less tire Spinning/chirping and quicker traction.
Although first 15 minutes of driving its actually worse - guess the oil needs heating up?