Ahoy !
2002 S-type; 4.0L V-8; Naturally Aspirated; Auto Trans.
For reason that I do not know enough, I am not saying the automatic transmission has problems.
What I am saying is that my expectation is that when I put the gear selector into D Drive position, I expect the selection to be crisp and definite. Not so with my car. Gear lever is pulled farthest back in the D Drive position and, I need to apply a slight amount of throttle/increase RPM’s to prod the trans into engaging. This should not be, I am thinking.
So, I am asking the forum - Common problem with S-type auto-trans I need to have looked at or, merely simply a drain&fill ?
Thank you.
Best Regards,
Richard Cielec
Greater Chicago Metro; U.S.A.

You presumably have the Ford 5R55N transmission. Many Ford vehicles use versions of it so trans shops will be familiar with it.
BTW I don’t know if anyone has told you but the S-Type shares many parts with the Lincoln LS and Ford Thunderbird, many of which are carried by Rock Auto.
You most likely don’t need to drain, maybe just fill. There is a procedure for that which I have written up and can be found in the archives. Its the easiest thing to try first anyway.
There are certain known problems with it that have been covered on this forum, which can be found in the archives if you search 5R55N.
One is the servos, which can get worn. I have replaced mine with a patented improvement version which has o-rings on the shafts. My report is in the archives.
Another is solenoid valves inside, which I have not done.
Another is the plastic shifter mechanism, for which there is an aluminum replacement from several Jag parts vendors. I have done this, again in the archives.
BTW my car has 230,000 miles.

I forgot you were new to the forums.

This is part 1 of a long writeup of what I did. Part 2 to follow. I have a 2000 Model with 180,000 miles. My transmission was slipping, trouble upshifting into 2nd and 5th, gradually got worse, eventually generated fault code P0775 (Pressure Control Solenoid B Malfunction) with �Gearbox Fault� error message on instrument panel. It would only shift up with slow acceleration, behaving as if it was low on fluid, though it was not, and I even tried overfilling it. Usually it would work ok g…

[s-type] Changing the fluid in the 5R55N transmission S-Type

My 2000 Jaguar S-Type has the Ford 5R55N transmission, also used in LincolnLS and some Ford Thunderbirds. Ford in their infinite wisdom seems to think these things will never leak, so they did not provide a dipstick. Thus the only way you can know if it is low is to either wait until it starts misbehaving, or check it by following this procedure. Here are some instructions for those who wish to do this job themselves. Tools you will need: 8mm Allen hex for filler plug on back of tailcas…

I was unable to find my bit about the aluminum replacement for the plastic slider in the J-gate shifter in the archives, but here it is. I got it from Welsh Enterprises in Ohio. 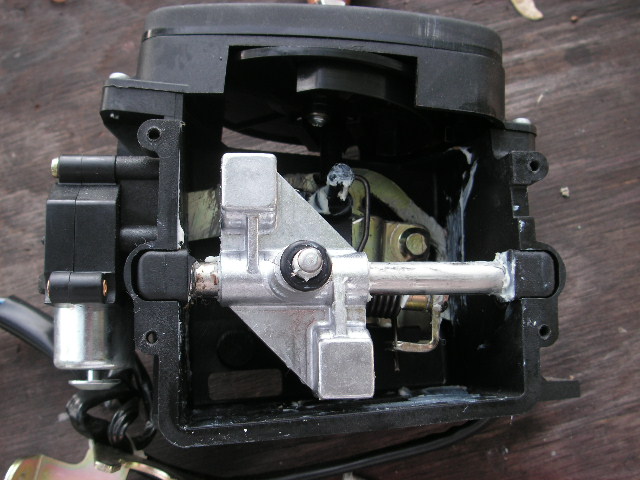 Hello.
Thank you, again.
Re: 2002 S-type, 4.0L; Auto trans: Shifter lever must be pulled all the way back and slight raise of engine RPM for trans. to engage Drive and then, not smoothly but, with a small roughness.

Ahoy !
Shifter Cable Adjustment and/or Cable Replacement; JTIS
Found a discussion in the Archives (Februay 2013) around adjusting or replacing the shifter cable.
No procedures were mentioned but, suggestion was made to search vendors on E-bay for Jaguar Technical Information System JTIS manual and TSB Technical Service Bulletins CDs (two). What exactly should I be looking for ? Merely search on those items for my car year/spec/SN?
Meanwhile, can someone point me to the adjustment procedure ?
Thanks.
Richard Cielec
Greater Chicago Metro; U.S.A.

In reply to a message from Dean K sent Wed 9 Jan 2013: Its a steel cable within a steel housing sleeve. They don’t really stretch in the way a rope does, so ‘‘Stretched’’ doesn’t sound like the right word to describe whatever problem you have. More investigation is needed. Does your shift lever move around a lot without doing anything, i.e. a lot of slop? Does it click through all the positions in the J-gate? Have you taken the top console off and had a look? This is very easy, open the …

Here is a pdf of my experience repairing the J-gate shifter.
J gate shifter repair.pdf (688.7 KB)

As I recall mine was only the second Jaguar customer for the special servo vendor in Wisconsin and I received the wrong servos the first time and had to send them back and get the right ones. It is better if you can take your old ones out and quote part numbers and colored marking dots on them when you place your order. They are a bear to get out and in, so I can’t imagine doing it on ramps.

I just last month bought a new JTIS disc on ebay from sell_84_me that runs on Windows 8.

Hello.
a bear to get out and in, so I can’t imagine doing it on ramps. - So I’ve read from your write-up. And, if I correctly recall your write-up, the trans. needs to be slightly lowered/supported. This is why I need to find a friendly shop with which I can work. In addition to the lift, car will need to be layed-up a while awaiting the servos. Perhaps I can find a “gearhead” Ford/T-Bird/Lincoln biased shop in the Chicago area that is accustomed to alternative approaches.
Just occurred to me: are the Part Nos. and coloured dots visible externally such that I do not have to pull the servos to identify them by those markers ? Sounds like not by the way you discussed them.

Oh, good golly - thank you for the PDF. Wish I could ditch work and dig into the car.

Temps dropping to Winter unpleasantness so, reluctant to try removing the top console and causing breakage from cold. I’ll watch the thermometer. 40’sF I’ll give it a go. 30’sF nope.

Hello.
Can you please clarify some points on your J-gate shifter .PDF, please ?

Thanks. I think that is my puzzlement for now.
'Seems that as long as I am in there checking cable adjustment, I should go ahead and upgrade to the aluminum slider re: a sooner or later repair.

Servos - The part numbers and colored dots are on the part, so yes you have to take it out to see them. But maybe AJ Superior Solutions knows the correct part for Jaguar by now. They didn’t in 2012.
Edit: Hmm, apparently not.

1A. You can move the shift lever around as you need to. As I recall the key has to be in the lock and maybe switched on and you have to step on the brake pedal.
1B. No value inspecting at the beginning because you don’t know that the cable is set right. Unless there is an obvious fault like nuts loose or cable frayed or something. Loosen both nuts, set the cable right, then snug up both nuts, then tighten them equally.
1C. Yes, pull the cable end to set the trans in Park. Pushing it through 6 clicks puts it in Reverse (i.e. there are 7 positions of the cable).
2. The oblong lever is on the right side with a big long slot in it, and the swivel point of the slider passes through it and moves it up and down.