This is part 1 of a long writeup of what I did. Part 2 to
follow.

My transmission was slipping, trouble upshifting into 2nd
and 5th, gradually got worse, eventually generated fault
code P0775 (Pressure Control Solenoid B Malfunction) with
�Gearbox Fault� error message on instrument panel. It would
only shift up with slow acceleration, behaving as if it was
low on fluid, though it was not, and I even tried
overfilling it. Usually it would work ok going through the
J-gate 2-3-4-D.

This is a common problem with Ford Explorer which uses a
similar but not exactly identical trans.

Before getting into internals, first try an adjustment of
the shifter cable in case you are not getting it fully into
D. I did and discovered my rotary switch on the left side of
the trans needed adjustment, wouldn�t start in N but would
in D, but that wasn�t the main problem.

There are two large round covers on the right hand side of
the trans. These are pressure control servos, like pistons
with a straight rod attached, operated by hydraulic pressure
on the outboard side within the covers, which operate
springy band parts inside the trans and open and close fluid
passages when they move in and out of smooth bored holes in
the trans body. The Intermediate Servo is to the rear and
the Overdrive Servo is to the front.

The problem in the Ford 5R55N and other similar versions is
the shaft rod is hard steel moving in soft aluminum with a
bit of side loading on the inboard end, which wears the hole
in the aluminum into an oval, and it loses pressure around
the shaft.

The Ford approved fix is to bore out the hole in the trans
body and install a sleeve, either bronze or steel, and use
the standard servo shaft rod.

Here are some pictures of the servo pistons and oversize
repair bushing sleeves.

Also see the exploded view pdf with all the parts, the
servos are parts 902 and 907.

An entrepreneur in Wisconsin has come up with an alternate
idea which he has patented and is marketing on ebay and at
his web site. 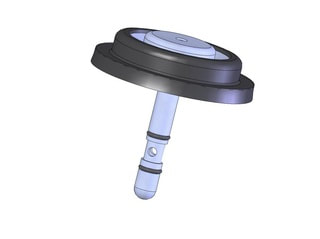 He takes the standard servo and cuts o-ring grooves in the
shaft with specially sized o-rings. I installed these servos
and my problem was immediately fixed.

Caution: Ford makes these trannys with several different
diameter servos, and information on exactly which servos are
used in the Jaguar S-Type is difficult to find and not
always accurate, even if you have the serial numbers from
the tag on the outside. Jaguar is not forthcoming with this
information for some reason. Mine was only the second Jaguar
customer order for this vendor, and he sent the wrong ones
the first time, but corrected his mistake promptly. The best
way is to remove your old servos and quote the part numbers
and colored dots on them when placing your order. Then
compare them with the new ones when they arrive.–
XK120 FHC, Mark V saloon, XJ12L Series II, S-Type 3.0
–Posted using Jag-lovers JagFORUM [forums.jag-lovers.org]–

Visit the Jag Lovers homepage at http://www.jag-lovers.org for exciting services and resources including Photo Albums, Event Diary / Calendar, On Line Books and more !

Part 2
The trans does not have to come out to do this job. I did it
with my brother on his lift. A young energetic man could
maybe do it on high ramps or jack stands with a helper.

Remove the six driveshaft bolts and prybar the driveshaft up
and out of the way.

Disconnect the left side exhaust pipe from the downpipe and
push it back.

Remove the bolts holding the steering rack to the frame.
This will allow the trans to come down a bit more.

Put a jack under the rear of the trans. Remove the bolts
holding the trans mount to the car body and let the trans
tilt down, but be sure it does not damage the steering rack.

Clean the outside of the round covers so you don�t get any
dirt inside.

There is some spring force on the inside, so use a prybar
and a block of wood to hold the cover in. You will need big
snap ring pliers to get the snap rings off. When you release
the prybar, the cover and servo piston will push out, with a
small amount of fluid loss.

On the replacement servos the o-rings and grooves were
different sizes, so be sure to get the o-rings on the right
grooves.

The servo bores have a taper. It takes some prybar force to
get the servos back in, but if they absolutely won�t go in,
you may have the wrong servos. You did compare them with the
old ones, didn�t you?

The original snap rings are hard to install, so they offer
an alternate modified type.

Adjust the bands on the left side according to the
directions, especially if you have been slipping a lot.
There is an adjustment screw with a big lock nut.

Then put it all back. Be sure to put the driveshaft bolts in
the right way; check the rear end if you are not sure.

Worn servo bores is only one of many problems a trans can
have. Bad electric solenoid module is another common one.
Another is a bad valve body gasket.

Visit the Jag Lovers homepage at http://www.jag-lovers.org for exciting services and resources including Photo Albums, Event Diary / Calendar, On Line Books and more !

Bringing this topic back to the top after almost 7 years and 53,000 miles.
My trans now has 233,000 miles and is misbehaving again, same symptoms, P0775 code and failing to engage when upshifting into 3rd and 5th.
I wonder if anybody else has found or heard about the patented o-ring modified servos failing after a few years.
I wonder if I should just replace the o-rings, or are the servo bores now worn beyond the ability of the o-rings to work.