What is the group number for the battery that fits a 1970 Series 2 OTS?

I just take my old battery in and ask for one the same physical size!
Dennis

Stuart,
I recently removed and replaced the old Group 24 battery in my 1969 Series 2 FHC with a new Interstate Group 25 which fit nicely. 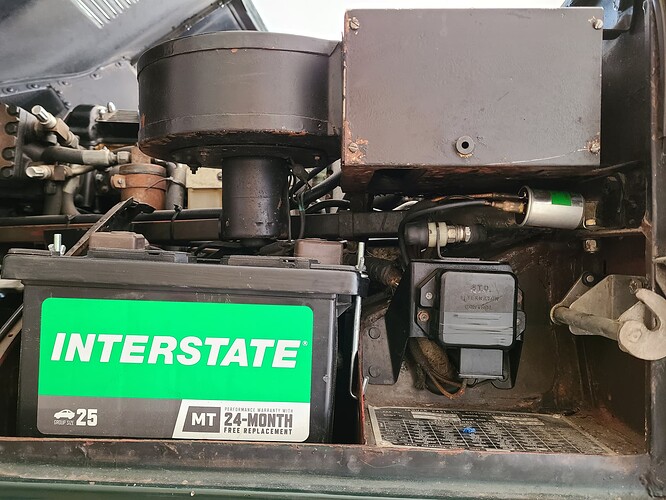 The Group 24 fit into the battery compartment OK but was too large for the hold down bracket. I got it from one of my parts cars and used it unsecured temporarily during and after an engine rebuild in 2021. Now that the car is on the road again and I am driving it regularly, I wanted a battery that fit and that could be properly secured with the hold down bracket. I drove the car to the local Interstate Battery distributor where they looked up my car in their computer and got another Group size which did not fit. Then they selected a few other batteries based on measurements that I gave them and some of them did not fit. But like the story of the three bears, one was just right, the Group 25.
During my search for the correct battery size I learned that batteries within the same Group can vary from manufacturer to manufacturer, have the posts reversed, and some have both top and side posts.

Paul, I sent a PM to you about a week or so ago about a transmission question. Did you receive it?

Paul,
Oops. I just found it.

I will respond by PM.

My last two batteries were Interstate Group 58, which comfortably fits the battery compartment and very snugly fits the hold-down bracket. (Coincidently, mine’s a 1970 S2 OTS too.)

I use a 26R. Its a little smaller and works well. It’s getting long in the tooth and this time I’m going with a slightly smaller AGM, forget the number. Something like 30/85.

I just replaced my Optima 75-25 with an identical one. Fits well and lasted 11 + years.

Had an Optima and it gave me 3 years and died flat so going to try someone else when i need it. But do like the AGM benefit.
i believe the one i was looking at is smaller and lighter, but my Interstate Grp 26 is still strong so I’ll shop when I need to.

I’m on my 2nd Optima, the first one I replaced at 8 years only because I thought it was time to ensure reliability on longer road trips. That battery is still in service in my Singer roadster, 5 years later. The 2nd one, the smaller‎ Optima 8020-164 35 has been in the E type 5 years now. I give them one top up charge over the winter, but don’t otherwise keep them on a maintainer.

Mike - how does that differ from a Group 25 (identically the same dimensions)?

In a similar vein - what designation on a battery IDs whether the POS (or NEG) terminal is on the left (or right)?

A 26R (reverse polarity poles) when facing the battery with poles at rear of the battery from you, the Neg pole is on right. Same for all. R. Designation i believe.

Optima 35 with the bottom mount Wieland battery hold down. 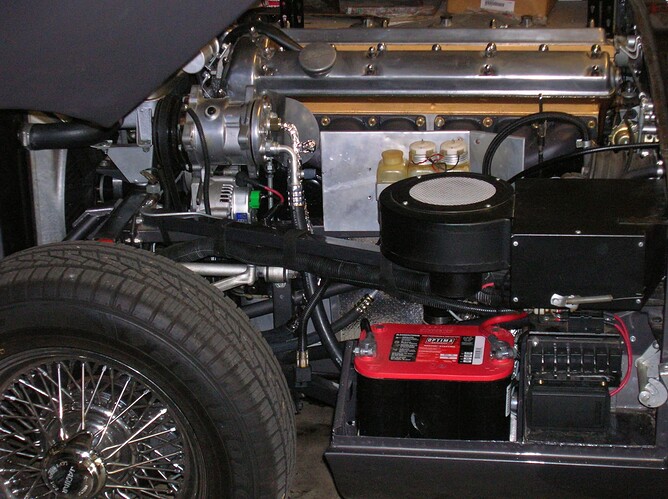 Mike - how does that differ from a Group 25 (identically the same dimensions)?

I suspect it has something to do with the position of the posts. The BCI numbers froze battery standards to prior art sometime in the distant past, I don’t think there’s any structured logic to it. There are also DIN, JIS and EN battery codes that are unfamiliar here in the states.

I have always used the largest battery that would fit the original hold-down frame on my 70. Optima 34R, need a shoe horn to get it in there.
Glenn