friends … meet my driver’s side fan … hear what a nice clean sound! at low … normal … Low and then off … what do I do? do I keep it like this?

I can’t attach the sound

Is the fan on the other side working normally on all speed ? If it is then the problem is within your fan assembly and it must be removed to repair or replace it. Since it operates on low speed it means the fan motor is fine and it’s the electronics in the assembly that’s the problem.

The way the system is designed, both fans have to be operating normally to force the combined air up into the box that holds the evaporator/heater core. Otherwise the good fan simply blows it’s air straight across into the failed fan. So you don’t get 1/2 the airflow with one fan working, actually you get very little.

Again if only one fan is not working properly it has to removed to repair it’s electronics or replaced.
There is a lot of information in the archives about repairing this very common failure on these units (usually it’s just the darlington resister) … not a difficult job to replace the resister at all.

Why not pull the fan assembly and without installing it plug in your replacement and see if it works on all speeds. (If it were me I’d just go ahead and repair the original unit with a new resister).

this is the sound, to listen you must change the extension from .pdf to .mp4

the fan on the right works, it is that driver’s side that makes this horrible noise that if I increase the speed it becomes like a motorbike

My mechanic says that before disassembling the blower motor he would like to try to clean the external grids, maybe leaves or other dirt is causing this noise … did you hear it?

Wonderful…I will try it, thanks for this help!

Hopefully the video will help and you can fix your problem without pulling the fan assembly.

Please let us know how it turns out.

This happens when the squirrel cage fan loses some of its blades due to the plastic drying out. The fan is now out of balance. You might find the broken off plastic somewhere inside the housing and you might be able to reglue it back. I ended up replacing the fan.

Guys, the driver’s side engine is officially dead, I’ve never fixed it because even if it is noisy, the air was coming out of all the vents … but now that it’s dead and only the passenger side is working, the air comes out strong at all speeds but only in the back and in the feet from the filler indicated in the photo … is this normal? the passenger side fan serves only the lower part? 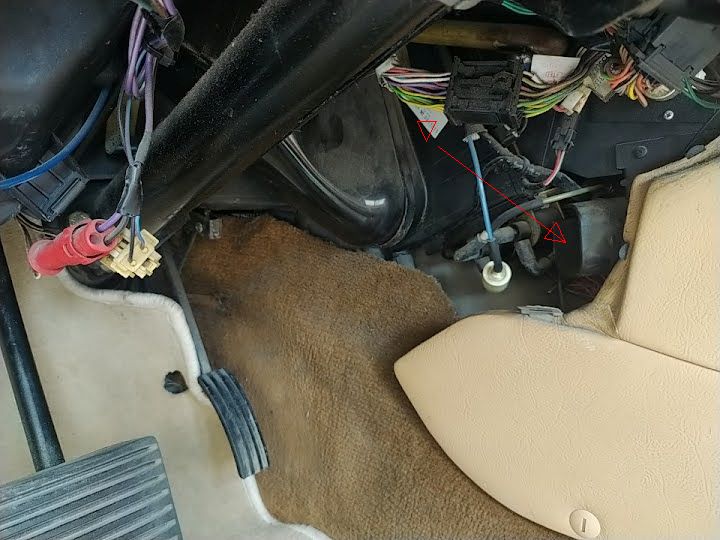 Each fan assembly blows air out from it’s housing directly into a big box that contains the evaporator and heater core. The fan assemblies are located on either side of this big box. There is no difference in the fan assemblies or their function other then one being right and the other left handed. So no, the two fans don’t provide different functions or supply air to different areas.

The fans are designed so they blow air directly at each other and the resulting cataclysmic collision of air particles are forced up and through the evaporator and heater core then out through the various outlets. This is determined by the two internal blend flaps.

Because of the poor design if one blower fails you don’t get 50% of air flow, you actually get very little. That’s because the good fan simply blows most of it’s air across the box and into the bad fan’s housing. 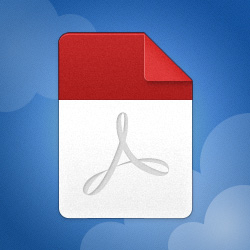 MediaFire is a simple to use free service that lets you put all your photos, documents, music, and video in a single place so you can access them anywhere and share them everywhere.

so to answer my question about “why does the air come out strong only in the lower part of the vehicle?” it can be concluded that since the collision of the air produced by the two fans does not occur, it remains at the bottom and does not rise in the upper ducts.

You’re correct that the air would stay at the bottom of the housing with an inoperative fan. The good fan just blows it’s air across and into the bad fan housing. When working properly both fans force air into the housing and that high pressure properly directs the air.

Here’s a picture of the “big black box” that holds the evaporator and heater core where all the “magic” happens. This is the orientation of the box as it’s located behind the radio. 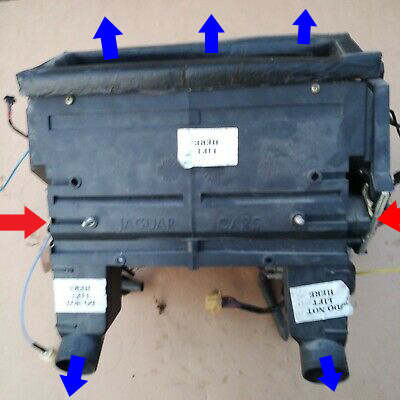 The red arrows represent the air being blown in from the two fan assemblies. The blue arrows shows the air exiting the housing. The air at the top is directed to the three dashboard vents and the two demister vents depending on the control settings. The air at the bottom comes out the footwells and
the rear vent in the console.

Groove I can not give myself peace … this cbc8966 is dead and I can not find any anywhere … repair it I do not know if it is feasible, what alternatives do I have? Is it possible that no other type of blower can be mounted?

or other major calamity

, that it can be repaired.

The problems with these rascals are very well documented, all the way down to the electrical components part numbers. If the electric motor is toast that can be repaired or replaced. The relays are also available, so don’t despair. After owning my '40 for over 30 years I’ve come to the conclusion that NOTHING is beyond repair (and usually it’s a DIY).

Worst comes to worst I saw this on EBay …

Now there is no way I’m paying $540 for a blower and I’m guessing that this gentleman (or lady) probably isn’t inundated with offers eh, so perhaps you could lowball it

As far as other Jag blower units working I’m guessing yes they would , but knowing Jaguar Cars something would probably have to be modified.