I have recently acquired a lovely original MKII. It is fitted with a factory sunroof! I have never seen one of these before on a MKII but it is listed as having been fitted by the factory according to the Heritage Certificate. I have looked through all my reference books but can’t find any reference to it. Has anyone ever seen one on another MKII. It looks similar to the one I have on my MKV and operates in the same way, turn handle, slide forward and back. It is also finished on the inside with polished timber matching the rest of the wood in the car. Again, it’s laid out in the same manner as on my MKV.

I looked at a Mk2 in Portland, Oregon a few years back that had a Webasto sunroof. I didn’t buy the car, but was led to believe they were installed outside of the factory at a nearby supplier. The Webasto sunroof is quite large with a canvas (I think) roof. The car I looked at would have needed a complete refurbishment of the roof…no doubt an expensive proposition.

Thanks very much for the information, it’s encouraging to hear that you have seen a proper factory fitted one like mine. I’m having trouble posting photo’s on the site as it just lets me load the j.peg information not the actual image??

It’s definitely a factory fitted sunroof and not a Webasto roof (honestly, I’d never heard of them before) as it’s painted steel with a typical wood trim, matching headlining on the interior like my MKV. It certainly doesn’t have a vinyl roof (I guess that’s what is meant by a canvas roof?).

I’m having trouble posting photo’s on the site as it just lets me load the j.peg information not the actual image??

Have a look in #user-guides-and-how-tos, there you’ll find: How do I: Add pictures to a post?

All of the parts required for the installation of the factory sunroof are listed in the Jaguar Mark 2 Spare Parts Catalogue. It’s an interesting read, as there are numerous differences between a standard Mark 2 and a Mark 2 fitted with a sunroof at the works.

Our Mark 2 was fitted with a steel sliding “Golde” brand sunroof prior to customer delivery in Europe. We purchased this car BECAUSE it had the sunroof installed. It really makes the driving experience so much richer…I’m very happy with the choice that we made.

Golde was the factory supplier of sunroofs to Porsche, Mercedes and VW in period (They were German based). Golde even manufactured an optional installation for the Ford Thunderbird.

According to period brochures that I’ve been able to locate, Golde sliding sunroofs were “approved” by Jaguar (as was Webasto I believe). I’ve included a photo of our sunroof installation from the interior side. Ours is electrically powered. A hand crank drive system was standard. As you’ve cited, the factory Mark 2 sliding sunroof looks and functions just like the larger Jaguar Saloons of the period. 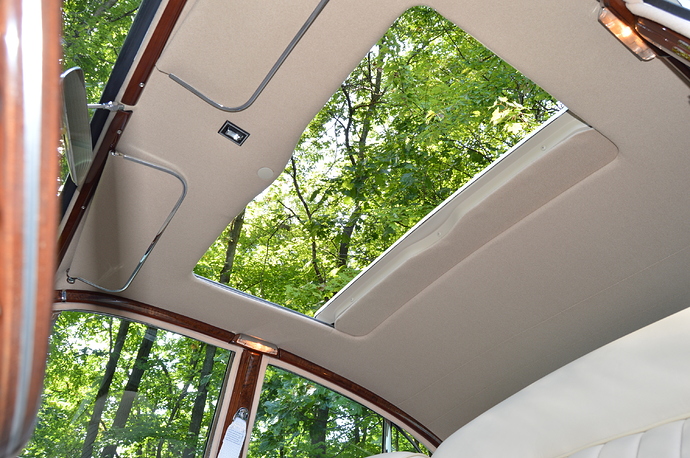 Thank you for the information and the photo.

I finally have access to my reference books and was delighted to find that the factory fitted sunroof is the one I have. My research says that in order to have a factory fitted one you had to have a specially reinforced body constructed as distinct from the standard saloon body. Little wonder they are so rare as I’m sure the factory was reluctant to do it because of the extra work involved. I wonder what they cost with all the extra work? 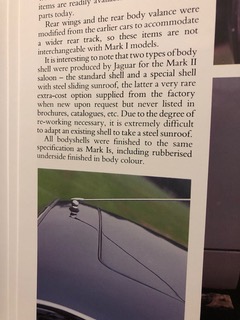 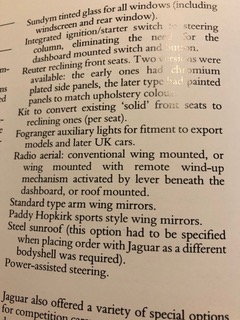 Golde was also used in Volvos, in case anyone should be looking for parts.

Here is a previous thread.

My 1958 Mk I has a canvas sun roof. Is there a special name for this type of sun roof? Someone told me that these could be special ordered from the factory which sent the car out to a supplier who installed it, returning the car to the factory for final finishing. Is this correct? How rare are these sun roofs? How many Mk i’s had them or what percentage of the Mk I’s had them. I suppose that they should add something to the value of the car. Any idea of roughly how much this might be?

I have discovered that I was following the correct method and while it shows up as characters in what I see, when I upload it to the forum the photo appears!

I’ve seen a couple over the years.

First one, at a show, wondered if it was factory but never talked to the owner.

Second one in a boneyard. I climbed all over that thing plus the headlining was gone, looked to me to be a factory job.

Hardware on both, the same and matched the era.

Never knew, until today just guessed it was real.

Webasto is the likely maker. Popular in Europe. My 1965 MKII was fitted with one from that era.

Never knew there was an electric powered option available?

I have just received word from Jaguar’s Heritage Trust that, “Sunroofs were optional extras and were not normally logged in the manufacturers build ledger.”. That is very odd considering that a completely different and strengthened body was required to fit the steel sunroof? One would think that such a significant variation would have warranted some mention? Fascinating stuff.

That sounds like they are thinking of the Webasto canvas sunroof, which was done to already finished cars by Webasto somewhere down the road from Brown’s Lane.
Maybe the steel sunroof was so rare as to not get marked into the company record books, or JDHT has not yet found it?
Did you have them look up your specific chassis or car number?

Yes they had the records for my car but no mention of the sunroof. It’s definitely not a ‘Webasto’ sunroof. I guess that as Nigel Thorley suggests that they were so rare that they are not mentioned. I suspect that they were also so difficult to produce that they didn’t want to encourage them being ordered.

I was able to find a heater rod for the MKV using your photo, so thank you very much for that.

Here is photo of the inside of the sunroof of my MKII taken today by my son. 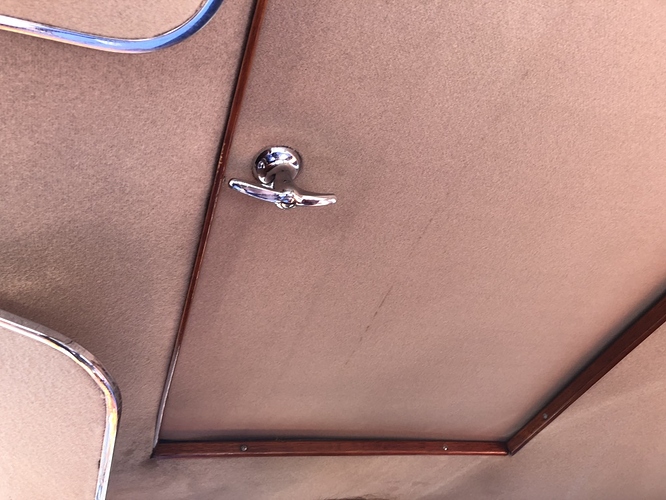 I always found it “odd” that for many years after Jaguar’s fire at the factory, they stated they had “lost” a number of records pertaining to Cars being built.

Thirty Five years later, they start charging for Heritage Certificates and the missing gap years affected by the fire have been magically reconstituted?

Perhaps the build records were saved or in a different part of the building from the fire?

The question for me is how accurate the records really are given the likelihood of human error from time to time?

I know of a two owner MKII (father then son) which has numbers matching the build plate in the car but when he ordered and received a Heritage Certificate it said that the car had originally been fitted with a different engine!?? The engine had not been changed from new.