Hey Folks, I need some help with the front heat shield underneath the car. Here is a pic of it.

My car is a Oct63 FHC with an all synchro trany from a '65 coupe. The pic actually needs to be flipped left side to the right to be oriented correctly. I am guessing that the newer trany has something to do with the mounting issues I’m experiencing. The 2 angled brackets line up with the holes for sheet metal screws on the floor and the hole lines up with a tab that requires a larger sheet metal screw. Those 3 mounting points align all right. But the flat tab that has the captured machine nut falls nearly directly on the spring-loaded mounting bolt for the transmission. I.e., that tab cannot go where it aligns because the trany mount is in the way.
Any ideas as to what I may be doing wrong, or what I should do to mount the rear fastening point of this heat shield?

These replacements are being made wrong. I had to remove on of the rivets on that tab to rotate it into the correct alignment. I then drilled and replaced the rivet.

I can do that, but it still will be hard against the transmission even if I also bend the tab that holds the spire nut. That’s the fastener that goes through the large hole in the shield. For $80 one would think they get it right. Thank you for the suggestion; I’ll do something similar.
This is the correct orientation. 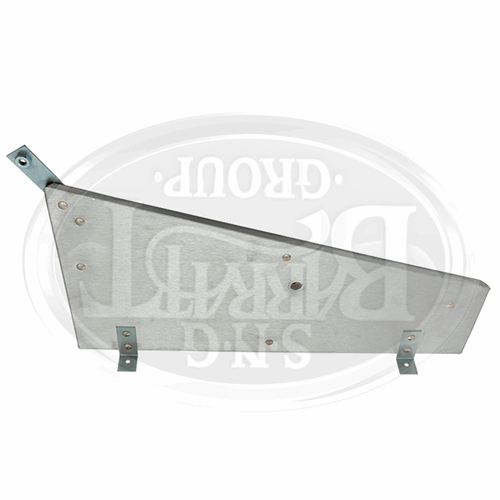 For $80 one would think they get it right.

You may owe SNG a bit of an apology, though it seems that they may share some of the blame…

The SNG photo you posted is of BD.20436 (ie for the 3.8 with the earlier gearbox mount). The angled bracket with captive nut fits that arrangement.
Unfortunately SNG does not supply BD.25237 (ie for the 3.8 with the later gearbox mount), but supplies BD.20436 in its place. The angled bracket with the captive nut needs to be modified so that it is parallel to the longitudinal axis of the car, as it bolts to a hole in the gearbox mount cross-member that supports the coil spring. NOTE the XKs Unlimited web site appears to have the correct part here.
HOWEVER, the other problem that you are having with the heat shield hitting the gearbox is not SNGs fault. Your car, having the later all-synchro gearbox will not work with either of the 3.8 mounts. Jaguar created C.25101 for the 4.2 cars (with the all-synchro box) which has a bend in it to clear the gearbox. I think that this version should fit your car with the later gearbox mount, all other things being equal. Hope this helps.

Your car, having the later all-synchro gearbox will not work with either of the 3.8 mounts. Jaguar created C.25101 for the 4.2 cars (with the all-synchro box) which has a bend in it to clear the gearbox.

I think this shows the bend referred to (dirty picture follows): 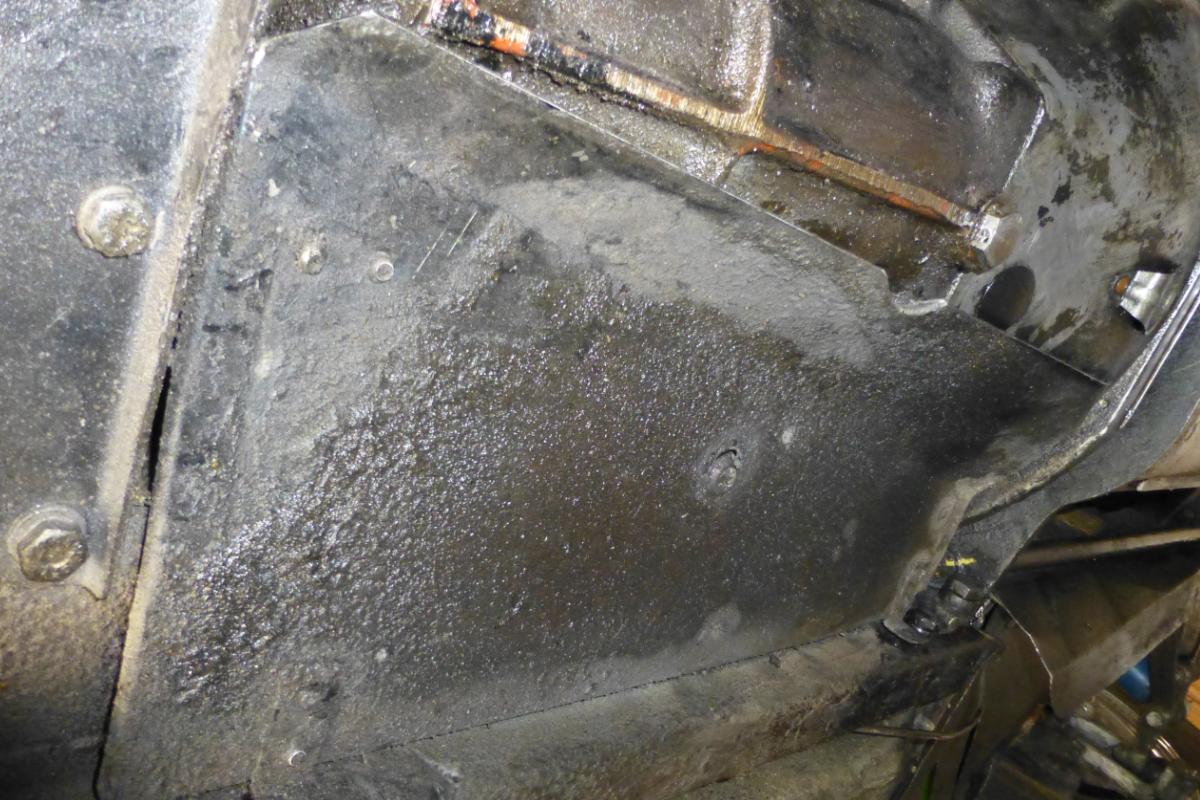 Thanks to both of you David and George. I was looking at the pic George shows and was thinking the shield I have does not have a bend like that. I did make it clear to SNG that I have the later gear box in my car. The guys there seem quite conscientious so I am surprised they didn’t alert me. I haven’t even unwrapped it so I can exchange it I should think. SNG shows they have the correct part, C25101, assuming it has the right shape as I cannot tell from their photo.
Or, I can bend it on the brake and re-align the rear tab to fit the transmission mounting plate. The insulation will likely fracture, but I can repair that with an overlay of the same material or remove as the C25101 does not have insulation above the bend.
Any preference?

Well I’ve solved the problem. SNG will take this back and send me C25101. Swap out and they’ll pick up the freight. How’s that for good customer relations?

Yes it is. Especially if one considers 20% of my order from the west coast guys are wrong (fuel sensor screws), don’t fit (gas tank fill hose and sump gasket). And they want me to pay to return their mistake.

I regarded the supplied replacement to just be a kit to make the part.

How’s that for good customer relations?

I’ve had similar service, they are my primary supplier because of it.
Cheers,
LLynn

I’m trying to focus on one because it pays to do so, but I spread the initial orders to see who suits me best. On the fuel hose, I also figured to fit it. I have the original but the one I was sent is too big in diameter; it simply falls right off the pipe and wobbles on the pipe if you hold it there. The original was not slotted, but is fairly short. About the length of the bottom of the slot to the bench top. It’s the diameter that bothers me; it should be quite a snug fit to put it over the pipe at the filler and at the tank. That is not the case.

SNG is second to none!

Does anyone have a better picture of the heat shield installed.67 roadster. Thanks

If none pop up on this thread, I’ll upload one when my Series 2 front heat shield arrives and I install it. It will look like the 4.2 cars because my gearbox is an all synchro.

Does anyone have a better picture of the heat shield installed.67 roadster. Thanks

Charlie,
Try browsing the auctions and XKE-data website for images of the bottom of cars.

SNGB sent me the replacement 4.2 front heat shield to replace the standard 3.8 shield. Called them and they sent the new one in 1 Day! I’ll use their box to return the 3.8 shield and they’ll pick up the shipping. Can’t beat that.

JCarey here is the 4.2 front heat shield installed on my Series 1 3.8 with an all synchro box. I used the 4.2 shield to get the bend for the transmission. It is afixed here with the bolt going through the transmission mounting plate, the metal screw through the round hole with a washer into the tab with a spire nut. Note the two angled tabs that use a sheet metal screw into the body’s floor pan strengthener are not screwed in yet. The rear screw lines up with the aft hole on my 3.8 car, but the front screw will require a new hole to be drilled as the tab is about 3’ further forward. No biggie. Took a bit of fiddling and tab bending to get the trans tab aligned and the body tab with its spire nut aligned. Maybe 15 minutes in total to install. 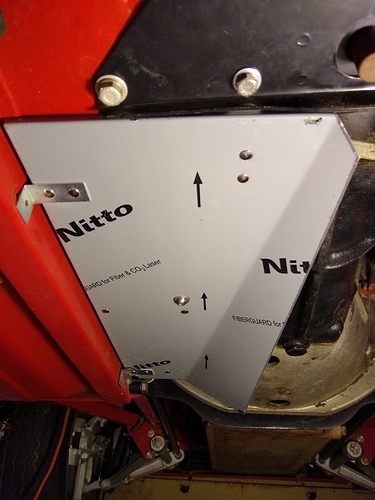 Scott,
Make sure that he heat shield doesn’t touch the transmission or you’ll end up with a lot of noise and vibrations inside the car (from under your seat). Other than that- this looks like a good fit.

I was worried about that and I’ve bent it at the crease. Probably a bit too far but it is an inch away from the trans at present. There’s probably going to be some argument between the trans and the exhaust pipes and I’ll try to split the difference when all done. Thanks for the comment.