My 1982 V12 runs at 84-88c in a hot summer and 82-85c in winter with 82c thermostats. We seldom get below 0c but we can often reach 30-35c in summer so hence the 82 thermostats.
Considering that there will be a significant rise in heat after your motor stops… with your temps you risk dropping a valve seat.

Measure how? If youre using an IR gun you are right by the exhaust.

Where are your gauges tied in and what do they say? (I know you have a digital temp gauge…)

You need to measure the coolant temperature. Exterior readings of the metal are useless.

This means adding a coolant temp sender with gauge to the water rail, if you want to know true temperature.

My digital guage connected to the right radiator inlet and i get 100c-105c .
That is why i check the system with ir gun.

I would rely on that. IR on the Water Rail is going to be way off.

Your engine is running on the high side, but not overheating.

Since you live in a hot climate, you may want to think about a dual electric fan one day.

The temp at the termostat housing is 87c on both sides.

My digital guage connected to the right radiator inlet and i get 100c-105c .

I do not see how both of these can be accurate. The water cannot gain 10+ degrees between the thermostat and the radiator inlet.

It’s been a while when I brought out my IR gun to find out the temperature. I think I picked a really hot day last summer and was trying to confirm a couple of things. What my stock barrell type temp gauge meant or was telling me just below the N and what the temp was at the top radiator inlet and the lower outlet on the bottom. I believe I read some where I should be reading something like a 15C difference between the two if the radiator was doing its job.
Obviously you might get some variances depending on where you pointed the IR but i was around 88C -90C at the top radiator inlet vs 75C - 78C on the lower outlet (if I recall). 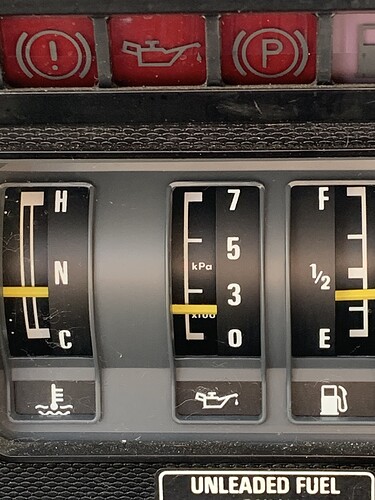 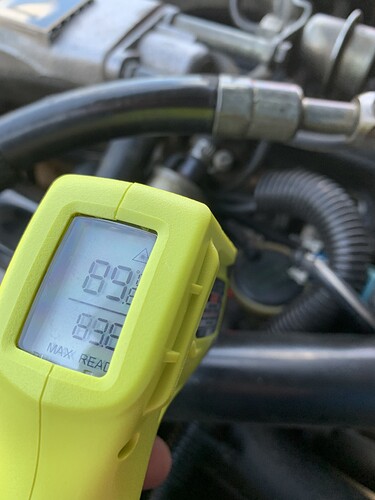 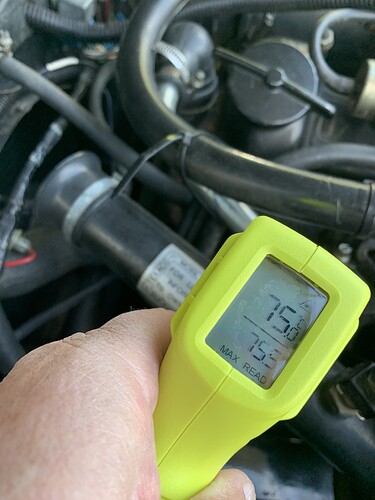 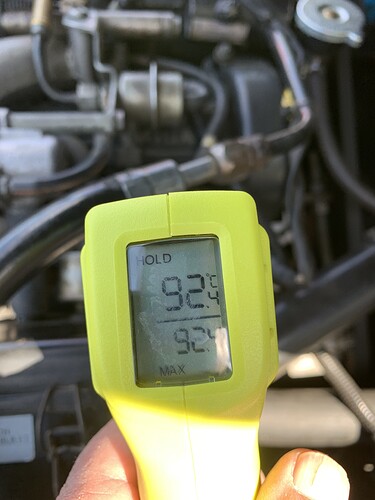 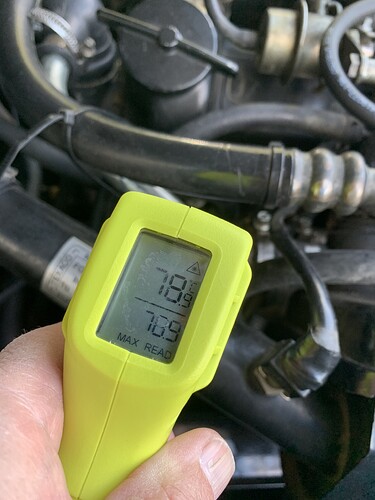 Best thing I ever did, i put in two aftermarket digital temp senders. One on A water rail where air pump sensor used to be. And one on B water rail where sensor for charcoal canister used to be. If you want to keep these two OEM senders, there are plenty of places to tap on the water rail pieces on both sides of the actual rail.

Now I know exactly what my coolant temps are on both banks while driving. Invaluable.

Sorry I’m a little late to this thread but what sort of temps are you seeing at the coolant rails.
Also are they the same front and back and both sides?

Do ypu have any pictures of your after market temp sensors ??

See the bottom of this page. Pretty sure Greg’s setup is similar.

@BobPhx - didn’t know you had a website… good stuff!

IR thermometers have a cone of influence beam, not a precision laser type beam.

Look at your IR thermometer’s owner’s manual for the cone of influence, which is given as a ratio, such as 10:1, 25:1, 33:1, etc. that is telling you the size of the circle that is being read at a given distance.

A 10:1 will be reading a 1 inch circle at 10 inches, or a 1/2" circle at 5", and if the IR thermometer does not also have a laser pointer showing where center of the beam is, then you are really only guessing at what you are actually reading.

Some IR thermometers have a circle of laser pointers (may have 6 or more) defining the outer circle of the cone of influence, are quiet neat as they show you everything that is within the circle being read by the IR - takes the guesswork out of thinking 'that is 5" away, and my 10:1 is reading a circle that is 1/2" diameter circle … if shooting 90 degrees perpendicular to the surface, but it is reading an oval shape if shooting at an angle off 90 degrees, which means that shooting perpendicular is as important as having a good ratio IR thermometer.

A 10:1, 10" from the target, no laser pointer, not shooting perpendicular to the surface … means you are just guessing at what you are actually taking an IR temperature of.

I must admit , I’m not sure what you’re trying to say exactly.
It just has a red light point and shoot. It works fine.

It just has a red light point and shoot

The red light is the laser pointer for the center of the IR measurement cone, which is the first step to “good”.

The next step is to find out what the ration is. What manufacturer and model IR thermometer is it? I can look it up, but it likely has that ratio on the unit.

The last step is the easy part - point it straight at a flat surface holding the IR termometer at at right angle to the surface - that is a user controlled aspect not a function of the unit.

A Google search indicates it might be a Ryobi Ir002 Infrared Thermometer from Home Depot. I didn’t see the spot ration in the manual, however, some search search result show a spot ratio of 8:1.

An 8:1 ratio means that it is measuring a 1" circle at 8" from the IR gun face … the farther away you are, the larger the circle.

“Circle” provided you are holding the red laser beam at a right angle to the surface you are measuring. If the surface is rounded, the spot shape changes (think of the Salvador Dali melting clock face shape). 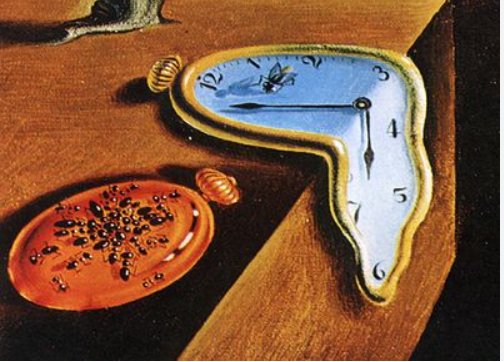 Has high ratio - not so much

Holding laser pointer at right angle to surface - unknown, this is a user controlled item

You may be guilty of over thinking this,
in comparison to a barrel gauge and a sensor located on the incorrect bank with a 1970’s temp sensor.
Bottom line it’s a guideline, not the NASA space shuttle launch pad design.

Like saying we tighten something ‘snug’ and then add one ‘grunt’ to it, and think ‘yep, that should be about right’.

OK Jerry, beep beep back up the bus. I don’t disagree that you make some valid points.
My first question might be , how long have you owned and operated a Jaguar V-12 engine.
I think I’m going on 16 years by scheduled maintenance and regular check ups to assist in keeping an eye on the operating temperature of a 5.3 L V-12 engine.
I have not yet( touch wood) have dropped a valve sleeve .
If your running a dual pass radiator your just need to confirm if the inlet and the outlet can confirm your radiator is doing their job based on your selection and expectancies of your t’stats.
Now to circle back, IR’s are an efficient way to confirm operating temps. If you would like to go further than that I would take Greggs advice and slap in some in line temp sensors.
IR’s are a good starting point for the layman hobbiest but if you want to see what a real IR camera does and what your engine temps are check out my post and pictures in the V-12 section on this forum.